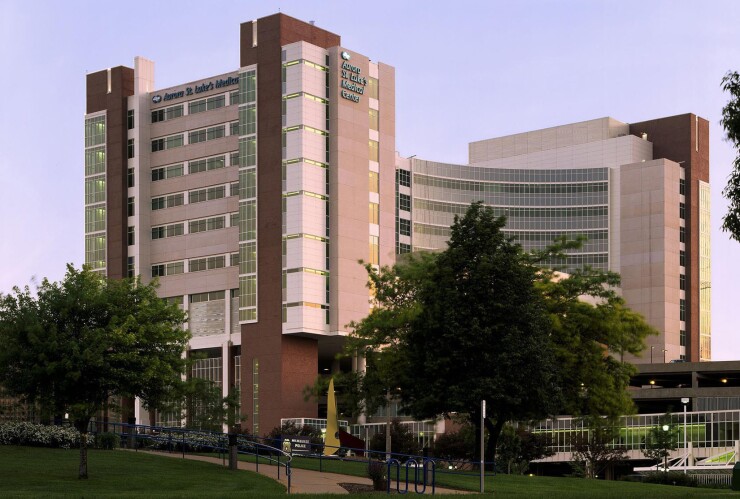 The hospital chains would create a joint operating system under the name Advocate Health that would operate 67 hospitals across Illinois, Wisconsin, North Carolina, South Carolina, Georgia and Alabama with combined revenues of $27 billion.

Advocate brings $14 billion in revenues and 27 hospitals to the table and Atrium brings $13 billion and 40 hospitals.

“This strategic combination will enable us to deepen our commitments to health equity, create more jobs and opportunities for our teammates and communities, launch new, game-changing innovations and so much more,” Atrium President and Chief Executive Officer Eugene Woods said Wednesday.

Woods and Advocate President and CEO Jim Skogsbergh will co-lead the organization for 18 months after which Skogsbergh intends to retire. Woods would then assume sole leadership.

Wake Forest University School of Medicine in Winston-Salem, North Carolina, will serve as the academic core of the combined entity.

Advocate Aurora was created through a merger of Illinois-based Advocate and Wisconsin-based Aurora in 2018.

The board of each system has signed off on the merger but it is subject to local and federal regulatory approval and faces heightened anti-trust scrutiny that the Biden administration announced last year across the sector.

Both are behemoths in their regions and carry ratings in the double-A category. They laid out some initial information about their future debt plans.

Atrium had just under $4 billion of long-term debt outstanding as of September, according to S&P Global Ratings. Advocate Aurora had $3.55 billion of outstanding debt in August, Moody’s Investors Service said.

“Neither Advocate Aurora nor Atrium has agreed to assume any liability for or otherwise guarantee the other party’s debt as part of the proposed combination,” a notice posted on the Municipal Securities Rulemaking Board’s EMMA site says. “The parties do anticipate that they will evaluate the existing debt structures of the organizations, with a goal of combining credits where reasonably possible, if Advocate Health concludes that such restructuring could benefit the combined organization.

“Any such restructuring, which may or may not include any refinancing of existing debt, will be dependent on market conditions, management considerations and other factors,” it says. “On the closing date, Advocate Aurora and Atrium will continue to own their respective assets. No assets will be transferred as part of the proposed combination.”

Advocate carries ratings of AA from Fitch Ratings and S&P and is rated Aa3 by Moody’s. Atrium carries an Aa3 from Moody’s and AA-minus from S&P.

“Despite the considerable challenges presented by the coronavirus pandemic, Fitch expects that long term the system maintains a robust operating platform and margins will return to a level consistent with a strong operating risk profile” in the 9% range, Fitch said in a report on Advocate Aurora last summer.

Both have been growing through mergers or strategic partnerships. Carolinas HealthCare System rebranded as Atrium Health in 2018 kicking off an expansion that led to a merger with Georgia-based Navicent Health. Atrium merged with Winston-Salem-based Wake Forest Baptist Health in 2020 and last year acquired Rome, Georgia-based Floyd Health System. Atrium Health is the d/b/a
name for Charlotte-Mecklenburg Hospital Authority.

Advocate and Aurora were the largest systems in their respective states when the merged in 2018. Leaders laid out goals early in 2020 to cut costs and double revenues by 2025 with their eye on further acquisitions or mergers.

Advocate Aurora signed a letter of intent in June 2020 to merge with Beaumont Health, Michigan’s largest system but it fell apart later that year amid internal Beaumont staff opposition. Beaumont went on to join forces with Spectrum Health.

The COVID-19 pandemic might have sidelined some deals or prompted some to consider alternatives such as strategic partnerships for specific services, but the Advocate Atrium proposal signals that consolidation remains on managements’ minds. Systems are looking to capitalize on size to manage rising expense pressures from issues including a nursing and other labor shortages and supply chain struggles.

Merger and acquisition activity among not-for-profit and for-profit hospitals dropped off in the first quarter compared to the same period last year, according to Kaufman Hall. “The pandemic has affirmed the imperatives of scale and we expect that this quarter’s results will prove to be an anomaly as we (hopefully) move beyond the COVID-related distractions that health systems have faced over the past two years,” Kaufman Hall said