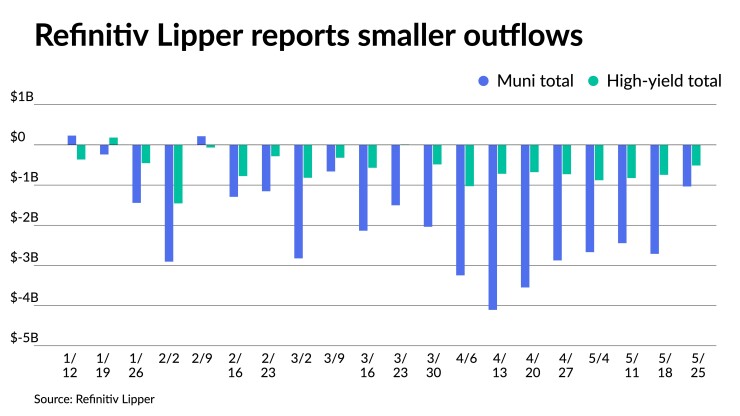 Municipals made further gains on Friday, pushing yields down as much as another eight basis points, to close out a seven-day rally, the likes of which haven’t been seen since the end of March 2020 as the market began to rebound from the COVID-19-led turmoil.

“Although it is too early to call it a win, this week’s price action brings us some hope that the end of this year’s crisis might be in sight,” said Barclays strategists Mikhail Foux, Clare Pickering and Mayur Patel in a weekly report. “One could say that it was the first real broad-based municipal rally this year; and with yields dropping 40 basis points-plus across the curve, in many ways it has been truly remarkable.”

However, there are still a lot of uncertainties on the economic front, rate volatility might spike again, and supply might surprise to the upside, they said.

This is the smallest outflow since March 9. Outflows in 2022 total $37.6 billion, marking the 15th consecutive week. The last time there was on an outflow streak of this magnitude was in 2013 during the Taper Tantrum when fund outflows lasted 33 weeks and totaled $42.3 billion. Participants expect outflows to slow, but are still cautious about the timing of a return to inflows.

“We do not foresee muni fund outflows completely stopping in the near term (although we could see one to two weeks of a temporary relief), but summer redemptions should help support the market,” Barclays said.

This is especially true “if supply does not overwhelm, which remains a big question mark, as many issuers might become much more aggressive in tapping the primary market if conditions improve,” the strategists said.

Jeff Lipton, managing director of municipal credit at Oppenheimer & Co., also pointed out that despite the much improved tone, fund flows continued negative for the 15th consecutive week yet the pace of outflows appears to be ebbing.

“Secondary market bid list activity slowed toward the end of the week, yet we are hesitant to identify a renewed trend given the extended Memorial Day weekend with attendant lighter staffing levels on the desks,” Lipton said in a weekly report.

Market technicals are expected to generate heavy reinvestment needs over the summer months, Lipton noted. According to Bloomberg, about $28 billion of bond calls and maturing securities are scheduled over the next 30 days, up about 4.3% from the prior week, he said.

“Even holding the looming reinvestment needs off to the side, heavy cash has been available for investment guidance and we see deployment of a portion of this money into the municipal asset class should our technical outlook take hold against a more opportunistic investment backdrop,” Lipton said. “Improved technicals, taken together with what could be a more stabilized rate environment, should catalyze admirable muni performance and may begin to spark a reversal in fund flows.”

A lot will depend on rates of course, and Barclays strategists said they still see quite a bit of risk as the market is close to the low end of the recently established trading range.

“Moreover, with yields much higher this year, most low coupon bonds are trading well below par, and durations of investor portfolios have meaningfully extended,” they said. The same goes for the durations of the muni investment grade and high-yield indexes, “making investors more susceptible to rate volatility — hence more defensive.”

Notably, this duration increase of the IG muni index is still smaller than the one in 2013, and the largest portion of this increase has taken place in the past 1.5 months despite the yield of the index increasing much more in the first three months of the year, according to Barclays.

“As durations of investor portfolios have increased, we have started to see much less appetite for longer-term debt, and yield curves have started steepening,” Barclays said. “If investors start feeling more confident that rates are stabilizing, we could see more demand for long bonds; in our view, the 20-year part of the curve might present the best value for investors looking to extend, as the 10s20s differential is close to its highest point in a decade.”

Lipton noted that while the ultra-short tenors of the muni market have been the best performers year-to-date, the five- to 10-year part of the curve has captured the May outperformance as longer maturities have been less responsive to UST price activity.

“As we chart the course for the remainder of the year, investors are advised to limit maturity extension, as 90% of the curve can be captured within 10 years and about 75% can be realized with a five-year investment,” Lipton wrote. “We expect shorter tenors to continue to outperform for some time to come. It is further recommended that investors preserve credit quality given what we see as a visible runway for credit spreads to widen.”

Muni losses “have ensnared all buyer classes and it would take a miracle to retrace the negative year to date returns with performance on track (for now) to book record deficits,” Lipton said.

“Although munis are outperforming U.S. Treasuries month to date, at 0.78%, they are lagging on an annual basis at negative 7.78%,” Lipton said.

Should muni yields and ratios return to higher ground, “buying opportunities become more compelling for a broader investor base as crossover and foreign interest advances,” he added.

The four-week moving average narrowed to negative $2.215 billion from negative $2.676 from in the previous week.

Competitive:
The Iowa Board of Regents is set to sell $150.320 million of University of Iowa Hospitals and Clinics hospital revenue refunding bonds, Series S.U.I. 2022C, at 11 a.m. eastern Tuesday.

Jessica Lerner contributed to this report.