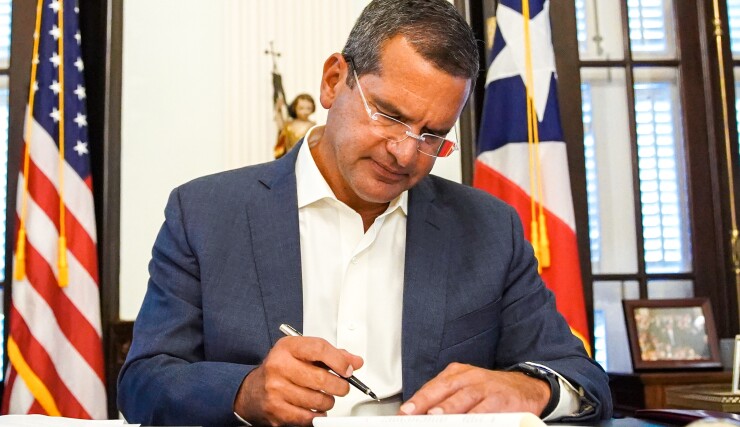 Puerto Rico Gov. Pedro Pierluisi on Tuesday ordered a 45-day moratorium on a diesel and gasoline tax, which could trim $25 million that would normally go to the general fund.

“With this measure we seek to relieve the people and the economic impact on our families due to the increase in fuel prices as a result of the war between Russia and Ukraine, among other factors,” Pierluisi said.

The Puerto Rico Oversight Board said it “supports the government’s efforts to minimize the economic impact of rising gas and diesel prices on the people of Puerto Rico.”

The board “will be reviewing the joint resolution signed by the governor to ensure the concerns outlined in our letter from May 4 are addressed.” Those concerns include that it was a resolution, not a proposed law, and the timing.

The Joint Underwriters Association for Compulsory Liability Insurance would need to declare a special dividend of $50 million from its capital reserve, which will be subject to a special 50% tax, and send that $25 million to the general fund on or before the fiscal year ends onJune 30, Pierluisi said. This will compensate the general fund for the loss from the suspension of the gasoline and diesel tax, locally called the “crudita.”

The governor signed a moratorium on the crudita in early May but the board had problems with the measure.

In a May 4 letter to Omar Marrero Diaz, executive director of the Puerto Rico Fiscal Agency and Financial Advisory Authority, the board said the form of the proposal, as a joint resolution rather than a proposed law, was illegal. Second, it said the tax moratorium should not commence until the Joint Underwriters Association had made the distribution to the general fund.

The Puerto Rico Department of Consumer Affairs will enforce an order prohibiting increases in gross profit margins at all levels of the distribution and marketing of gasoline and diesel. The department and the Department of the Treasury will ensure the tax reduction is reflected in consumer prices.

In February and March, the governor urged the board to allow him to use emergency financial reserves to offset electrical price increases stemming from higher fuel prices. The board repeatedly rejected this.

Apple reports first decline in revenue in three-and-a-half years
Inside The California Mansion Where Harry And Meghan Filmed Their Netflix Documentary
Robots could surpass workers at Amazon by 2030, Cathie Wood says
Fantom’s 5-week winning streak is in danger — Will FTM price lose 35%?
January job growth is forecast to slow slightly, but the impact from big corporate layoffs is uncertain