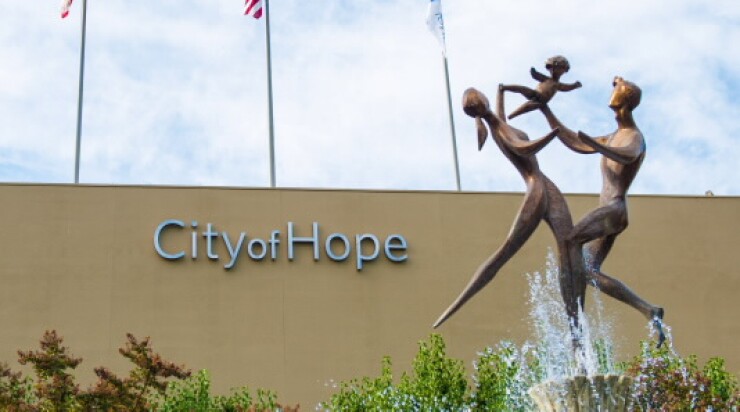 The acquisition of Cancer Treatment Centers of America and financial weaknesses over the past two years have resulted in City of Hope, the Los Angeles region’s world-renowned research and cancer treatment center, receiving a one-notch downgrade to A2 by Moody’s Investors Service.

The downgrade to A2 from A1 affects $2 billion in long-term debt issued by conduit issuer California Health Facilities Financing Authority and City of Hope.

Moody’s analysts cited a potential 50% increase in long-term debt to refinance a bridge loan used to acquire CTCA, the operational and integration risks associated with the transaction, and weaker financial performance by City of Hope over the past two years, which is expected to continue through the end of fiscal 2022. City of Hope borrowed $650 million via a bridge loan that matures on January 30, 2023; it could either refinance the loan with long-term debt, repay the loan with unrestricted reserves, or a combination of those, Moody’s wrote.

The cancer center, headquartered in Duarte, a city on the eastside of Los Angeles County, closed on the acquisition of CTCA in February. With CTCA’s network of oncology hospitals and outpatient care centers, the acquisition expands patient access to world-class research and cancer care across the country, according to a City of Hope statement.

“City of Hope and Cancer Treatment Centers of America are combining complementary strengths, with a shared commitment to providing the best, most compassionate care possible,” said Robert Stone, president and CEO of City of Hope. “Together, we are creating a new model for how cancer care is delivered, leveraging real world cancer care experience to inform scientific innovation and making tomorrow’s new discoveries available to the people who need them today.

City of Hope now has one of the largest geographic footprints in cancer research and treatment, providing patients with timely access to exceptional care, clinical trials and leading-edge innovation, according to the center. The combined organization will treat 115,000 patients each year, with more than 11,000 team members and 575 physicians in California, Arizona, Illinois and Georgia.

CTCA will be converted to a non-profit.

The outlook is stable at the lower rating reflecting Moody’s “expectation that City of Hope will generate weak margins in fiscal 2022 but demonstrate gradual improvement at the legacy organization over the remainder of the fiscal year,” Moody’s analysts Daniel Steingart and Susan Fitzgerald wrote.

“We expect City of Hope’s leverage to remain high and financial performance to remain suppressed relative to peers and its own historical performance over the near term as it works to improve performance of the legacy organization, ramp up Orange County operations, and integrate and grow CTCA,” Moody’s analysts wrote. “The organization’s strong fundraising platform and good balance sheet metrics will provide a measure of stability during this transitional period, though additional debt or a prolonged period of weaker financial performance will pressure the rating.”