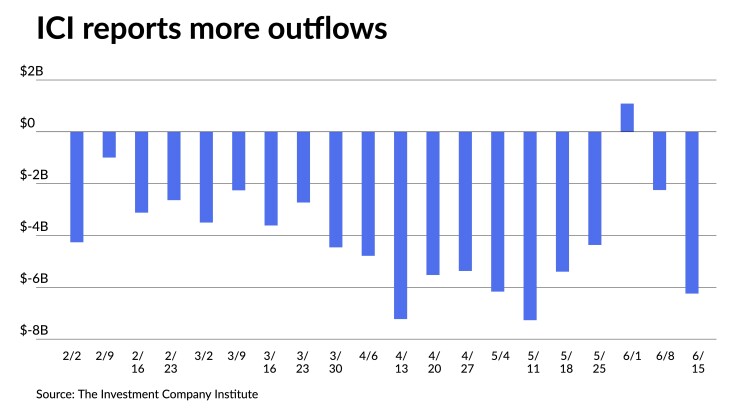 Constructive secondary trading and an active primary pushed triple-A muni yields lower on the back of a U.S. Treasury flight-to-safety rally after Federal Reserve Chair Jerome Powell acknowledged for the first time that it was “certainly a possibility” the U.S. economy may face a recession as the Fed continues to contend with inflation.

“Inflation has obviously surprised to the upside over the past year, and further surprises could be in store,” Powell said during a Senate Finance Committee hearing.

Municipals saw yields fall three to four basis points across the yield curve, with larger moves on the front end while UST yields plummeted as much as 17 basis points.

The Investment Company Institute reported investors pulled $6.243 billion from muni bond mutual funds in the week ending June 15, up from $2.247 billion of inflows in the previous week. This is the third-largest figure for 2022.

Exchange-traded funds saw outflows at $633 million versus $398 million of inflows the week prior, per ICI data.

The primary was particularly active Wednesday.

Fundamentals have been overwhelmed by a rising-rate environment and then exacerbated by negative fund flows, said John Miller, head of municipals at Nuveen.

Muni returns year-to-date have all been about rates, flows and technicals, and fundamentals have taken a backseat temporarily, he said during a media roundtable in New York on Wednesday.

“We made a huge adjustment and opened up a lot of value given high inflation rates,” he said.

Triple-A longer duration bonds have adjusted more than 200 basis points in many cases, while taxable equivalent yieldsare extremely high as a result.

“At these at these levels, even incorporating the Fed-driven environment that we’re in, the adjustment has been both on an absolute basis and a relative basis,” he said.

Muni-UST ratios on the long end started at around 70% percent at the start of the year, but those ratios have risen since then, with the 30-year ratio hitting 110% a few weeks back. Ratios have since fallen, but a 100% ratio on the long end is still extremely attractive, Miller said.

“We can produce a lot more attractive cash flow and reliable dividends as a result, which have been attractive to people in the past and getting them comfortable for the second half of the year,” he said.

The massive outflows from municipal bond mutual funds have led to a softer technical environment in the first half of the year. However, Miller said, “there’s a lot of outperformance that munis can generate for us for the second half of the year.”

“Bonds don’t have to rally, but we just need a little bit of stability during this new trading range, on the 10-year, on the forecast for Fed funds, that would be enough to get the confidence to push back,” he said.

And while USTs recovered “much of that loss by Friday,” tax-exempt munis could not, with “yields holding nearly in place amid another large weekly mutual fund outflow,” he said. As a result, muni-UST ratios rose.

The MMA Consensus benchmark curve “thus retraced and re-lost” around 85% of its long-end rally since mid-May and about 75% at the front end. He said this is “dispiriting but not disconnected from expectations. He noted the expectations are “heightened volatility (for lack of dealer investment in inventory and a prevalence of low coupon bonds), a dependence on fund flows (both for price discovery and secondary market supply), and a widespread if reasonable caginess among retail-facing managers worried about buying into a loss.”

Heightened volatility, he said, was “strongly in evidence last week despite an only moderate total flow of customer-sold par, any accounts that had been receptive to buying low coupons was probably among the sellers; 3s in particular saw widespread capitulation.”

The fund flow element, he said, hasn’t improved either. ICI reported $6.2 billion of outflows for the week ending June 15 versus Lipper’s $5.6 billion of outflows last Thursday. These figures indicate munis “will simply not stabilize until the mutual funds can do so first,” he said.

“On the other hand, investors who missed their opportunity to add cheap tax-exempt positions in May now have another, even if that means addressing element number three head-on,” Fabian said.

“Finally, also as expected, high yield continues to fare worse, related fund NAVs are down 16-18% [year-to-date], a seasonal uptick in defaults is ongoing, and disrupted taxable [high-yield] markets are complicating marketing efforts to regain investor interest and assets,” he added.

Muni prices, he said, “could use an injection of high-grade supply in 4s and 5s to stabilize price discovery and reassure investors.”

The average seven-day simple yield for all tax-free and municipal money-market funds rose 0.14% to 0.44%.