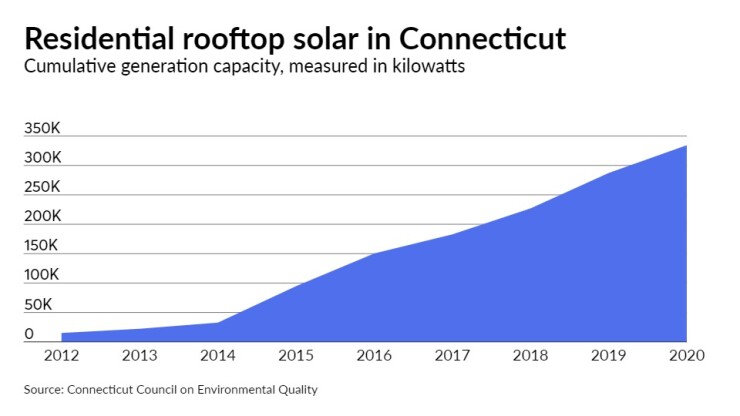 The Connecticut Green Bank is mulling another round of its climate-certified Green Liberty Bonds after initial offerings raised more than $40 million from retail investors for renewable energy projects across the state.

With a marketing program that echoed the Series E war bonds sold to Americans during World War II, Green Liberty Bonds targeted the general public and started at a minimum denomination of $1,000.

“Typically, you will find $5,000, or even $10,000 being the entry point for bond issuances,” said Bert Hunter, the issuer’s executive vice president and chief investment officer. “We wanted to lower the bar to enable everyday investors to be able to participate.”

In 2020, the Green Bank sold $17 million of Green Liberty Bonds. In 2021, the demand far oversubscribed its next offering by “four to one” according to Hunter, with “about $100 million in orders for the $25 million in bonds.”

The taxable bonds were Climate Bond certified with third-party verification from Kestrel Verifiers.

The Green Bank previously sold in 2019, to support the same program, $38.6 million of solar home renewable energy credit collateralized notes that were also climate bond certified but not marketed to the wider public like the subsequent 2020 and 2021 Green Liberty Bonds.

Bond proceeds thus far has gone into funding the state’s Residential Solar Incentive Program, or RSIP which provides incentives for both installation companies and a large cross-section of the public across income brackets.

The state government allowed the RSIP program to lapse at the end of 2021 after surpassing its goals for rooftop solar installations.

The funding mechanism for the program, according to the state’s Office of Legislative Research, was through renewable energy credits created for electricity produced by a qualifying residential solar system that received Green Bank incentives.

The state’s two major investor-owned utilities were required to purchase 15-year tranches of those credits from the Green Bank; that revenue services the bonds.

Following the sunset of the RSIP program, new applications as of Jan. 1, 2022, are directed to a much-changed incentive program administered directly by the utilities.

Though the Green Bank stopped taking new applications at the end of 2021, those who applied before the deadline are still eligible and, according to Hunter, new funds raised will go toward continuing installations and support for the next six years.

No definitive number exists for the bank’s 2023 bond plans, but Hunter said the Green Bank is likely looking to increase the total on its next deal, aiming for roughly $30 million.

“The state’s putting their credit on the line for this,” he said, adding the rating agency expects the state to “make good on those guarantees” in the future.

That means the Green Bank’s outstanding bonds were upgraded in tandem with Connecticut to A-plus from A in May 2021, and saw a rating outlook revision to positive from stable this May 23.

In connection with its climate bond certification, the Green Bank earlier this year released its first post-issuance verification report.

Through fiscal 2021, the report said, the bank’s three bond sales have supported more than 25,000 residential solar projects that mean more than 131,000 tons of carbon dioxide annually won’t be emitted.

Solar industry challenges
The larger solar industry, like many others, is currently struggling with inflation, supply chain problems, and the economy.

Hunter said another major concern for the Green Bank and the wider industry is a pending federal case against solar companies, which alleges they skirted tariffs aimed at China by buying components originally made there from four other countries in Asia.

“A fair amount of solar activity in the United States” ground to a halt after the announcement in May, as many companies feared retroactive penalties that could triple the price originally paid for the panels, he said.

The disruptions were so severe that the Biden administration, keen to protect its green initiatives, stepped in, according to Hunter, temporarily shelving the investigation while also lifting tariffs on solar imports from Cambodia, Malaysia, Thailand, and Vietnam to alleviate the supply bottleneck that had formed.

Still, demand for renewables is higher than ever, and in light of rising gas prices, conversations are “intensifying” around “the need to diversify energy supply,” while domestic demand for renewable technology, like solar panels and electric vehicles, rapidly increases, Hunter said.

Solar adoption in the U.S. has steadily increased — for residential solar projects like those the Connecticut Green Bank bonds support and also for utility-scale solar generation — and last year solar accounted for “50% of all new electricity-generating capacity” in the country according to an industry advocacy and research group, Solar Energy Industries Association.

According to the U.S. Energy Information Administration, the technology is responsible for an estimated 5% and of all electric production in the country, enough to power roughly 18 million homes. That number is projected to triple by 2035, buoyed not just by policy, but a rapid reduction in price due to industry advances.

According to the Department of Energy, breakthroughs in material science have made solar modules more compact and efficient, while new production methods have dropped costs by 85% over the last decade.

The Biden administration has also made reducing that price even further a key goal, hoping to meet a 2035 deadline for 100% cleanly powered electrical grid. Hundreds of millions of dollars have been pumped into scientific research and production incentives aimed at decreasing the price per module by another 60% by the decade’s end, according to the DOE.

The cheaper technology produces more electricity per panel, translating into smaller installation bills for consumers as well as greater yield from the systems installed in the future.

However, as hardware prices drop, rising “soft costs” threaten to stymie the industry’s growth, according to many experts.

“State and local governments that are new to solar or are developing solar adoption processes for the first time can have high costs due to inefficiencies in permitting, inspection, and grid interconnection,” according to a report from the DOE.

The report estimated that “red tape” accounts for 65% of the “price a customer pays for a solar energy system.” In response, the federal government launched programs to bring local electrical networks up to par and train local officials.