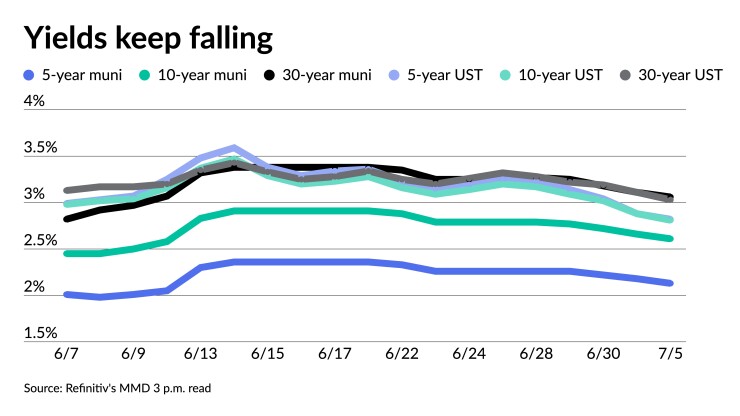 Municipal yields fell for the third session in a row following the flight-to-safety bid in U.S. Treasuries as recession concerns continue to grow. Equities were mixed.

Triple-A benchmark yields were bumped three to six basis points Tuesday with the strongest moves out long. Falling yields over the past two weeks have been “a welcome sigh of relief as we have seen yields as low as 0.67% back in February to as high as 2.97% back in April on 10-year notes,” said Jason Wong, vice president of municipals at AmeriVet Securities.

“As we shift our focus from high inflation to a possible recession, we could see investors jump back into the fixed income markets” as recessions tend to be favorable to them “which will limit some of the losses we’ve had in the first half of the year,” Wong said in a Monday report.

Yields on 10-year triple-A munis fell by 18 basis points for the past week to 2.61% and have fallen 30 basis points in the last two weeks.

“Although we’ve had two weeks of rallies, we still need to be cautious in the next few weeks as we have the July Fed meeting as well as the end of the bond-buying program in which we could see yields rise slightly this month,” he said.

“Even though we had a rally, muni bonds underperformed compared to Treasuries as 10-year notes are now yielding 93.68% of Treasuries compared to 89.50% a week ago while the 10-year ratios were at 84.53% a month ago,” Wong added.

Wong also noted that the muni curve has flattened slightly for the week as the gap between yields on short-term and long-term bonds flatten by three basis points to 130 basis points.

Due to the holiday-shortened week, the municipal bond negotiated calendar will be very light “with an expected size of $2.5 billion for the week with two deals covering over half of the issuance,” Wong said.

Due to the “early close on Friday, secondary trading only totaled to around $37.4 billion [last] week with the bulk of the trading happening on Wednesday and Thursday,” Wong said.

With last week’s rally, around 57% of all secondary trading was clients purchasing bonds from dealers, Wong said. Bids-wanted totaled around $5.43 billion last week, four of the days having over a billion listed up for the bid, per Wong.

Additionally, the average daily MSRB par traded dropped 22% from the week ended June 24, said CreditSights strategist Pat Luby. It’s still 11% higher than the one-year daily average. “Customer ‘buy’ trades exceeded ‘sell’ trades by an average of $2 billion per day, which was down from the previous week’s average of $3.4 billion,” he said.

The double- and single-A indices both tightened by one basis point. The triple-B Index widened by six basis points for the week but the month-end rebalancing was responsible for eight basis points of widening, he said.

The High-Yield muni index ended the week tighter by eight basis points, with one basis point of tightening attributable to the rebalancing, he said.