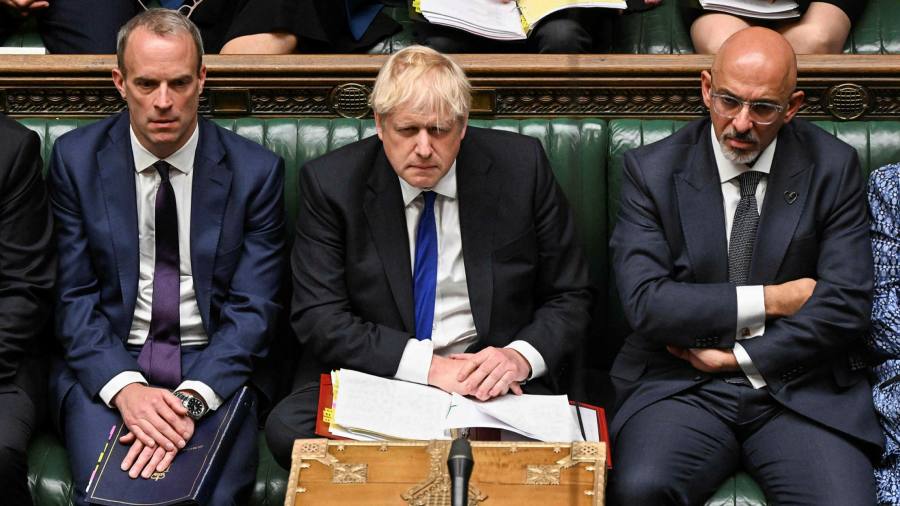 Boris Johnson’s turbulent three-year premiership was nearing its end on Wednesday night after he was urged to quit by a delegation of his closest cabinet allies.

The UK prime minister was warned that unless he stepped down there would be further cabinet resignations, followed by an inevitable humiliating defeat by Tory MPs in a no-confidence vote next week.

Johnson’s power drained away during the course of a dramatic day, which saw more than 35 government resignations and many more Tory MPs denounce his character and integrity.

It ended with the PM being confronted in Downing Street by once-loyal cabinet ministers — including newly appointed chancellor Nadhim Zahawi — and being told to resign with dignity. “The game’s up,” said one minister.

Even Priti Patel, the home secretary closely associated with Johnson’s tough immigration policy, told him the mood of the party had swung strongly against him and he should go, according to government insiders.

But Downing Street insiders insisted Johnson was determined to fight on, citing his 2019 general election mandate, and that he was drawing up plans to fill vacancies left by resigning ministers

After months of criticism of Johnson over his leadership and integrity — focused on his handling of the partygate affair — the deterioration of the prime minister’s authority has been swift.

The final straw for many was Johnson’s untruthful account of what he knew about the past sexual misconduct of Chris Pincher, whom he appointed deputy chief whip in February and who quit in disgrace last week after drunkenly groping two men in a private member’s club.

Sajid Javid, who quit as health secretary on Tuesday, questioned Johnson’s “truth and integrity” and deplored the fact that ministers were being sent out to defend positions that did not “stand up” to scrutiny. In a powerful resignation speech, he told MPs: “Enough is enough.”

Many other ministers and Tory MPs have reached the same conclusion and Chris Heaton-Harris, chief whip, was among those who told Johnson that he would now lose a confidence vote, which could come early next week.

Elections to the executive of the backbench Tory 1922 committee will take place next Monday, with the expectation that the new team will change party rules to allow an immediate confidence vote.

The prime minister cut a shrunken figure at question time in the House of Commons, where he insisted he would “keep going”.

But throughout the day, ministerial resignations poured in, raising questions about whether Johnson would be able to find enough Tory MPs willing to fill the vacancies.

Michael Gove, levelling-up secretary, was the first minister to tell Johnson on Wednesday to step down. One individual with knowledge of the conversation said: “Michael essentially told him that it’s time to go — it’s over.”

Nadine Dorries, culture secretary and an ultra-loyalist, and Jacob Rees-Mogg, Brexit opportunities minister, are said by government officials to have urged Johnson to fight on.

On Wednesday night Johnson was in talks with his closest advisers in Downing Street, as his premiership hung by a thread.

Sir Keir Starmer, Labour leader, appeared to acknowledge that Johnson’s departure was a foregone conclusion, attacking his potential successors as “a Z-list cast of nodding dogs”.

One member of the 1922 executive committee said MPs wanted a leadership contest to begin as soon as possible to replace Johnson, whose premiership has entailed the conclusion of Brexit negotiations and a pandemic.

“Ideally we can get the first rounds [where MPs whittle down candidates to the final two] done before summer recess and have a new leader in place for the autumn.”