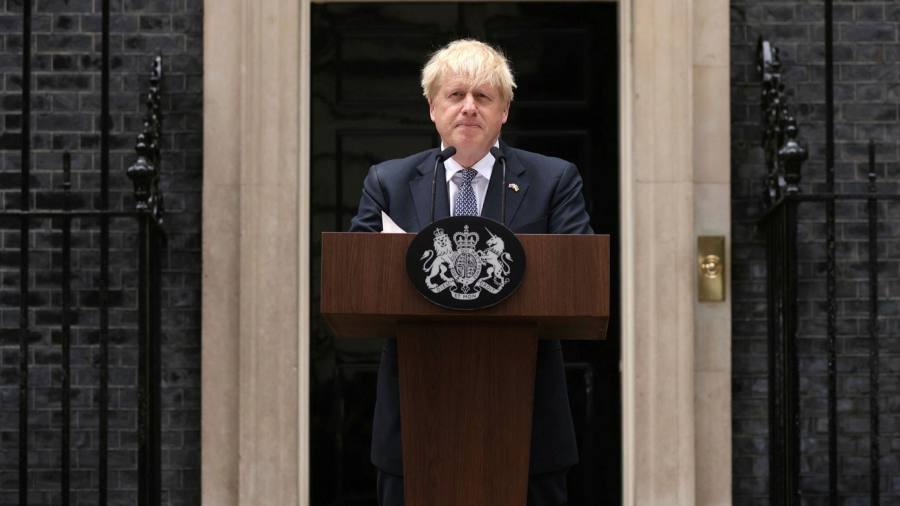 Boris Johnson has announced his “painful” resignation but defied pressure to step down immediately as prime minister, insisting he would remain in office until a new Conservative party leader is chosen.

In an address in front of No 10 Downing Street, after days of turmoil and mass resignations from his government, he accused his party of making an “eccentric” decision to ditch him.

Johnson, one of the most controversial British leaders in modern times, said the timing of the leadership contest would be announced next week, but a new prime minister is unlikely to be in place until September at the earliest.

However, many Conservatives, including a number of former ministers, believe Johnson should leave Downing Street immediately. “There’s no way I could serve under him in any circumstances,” said one.

Johnson’s announcement has fired the starting gun on the race to succeed him, with an array of candidates expected to confirm they are running in the coming days. There is no clear frontrunner.

Speaking from a lectern outside Number 10 and applauded by his wife Carrie and a remaining band of loyal Tory MPs, Johnson suggested he had been trampled underfoot by panicking colleagues.

“The herd instinct is powerful,” he said. “But when the herd moves, it moves.” He said he was “sad” to be leaving, insisting the Conservatives were only a few points behind in the polls.

His departure will end a tumultuous three years in office marked by Britain’s exit from the EU, the ravages of Covid-19, the war in Ukraine and a cost of living crisis, as well as his 2019 election win — the Tories’ biggest victory for more than four decades.

Johnson said he was proud of his record, including delivering Brexit, rolling out Britain’s Covid vaccine programme and providing support for Ukraine after the Russian invasion.

He said that he fought hard to hold on to the job — some of his colleagues accused him of demeaning his office by trying to cling on — because he felt it was his “job, duty and obligation” to deliver on promises made to voters.

Before his speech Johnson had already started to fill some ministerial vacancies, with Greg Clark set to come in — temporarily — as levelling-up secretary. James Cleverly becomes the third education secretary in as many days.

Johnson intends to convene his hastily assembled interim cabinet for a meeting on Thursday afternoon, in an attempt to convey a sense of national stability.

But many ministers who have resigned in recent days — including some that have been strongly critical of the prime minister — have indicated they would refuse to return to government while Johnson remains in Number 10.

Johnson spoke to Sir Graham Brady, chair of the 1922 committee of Conservative backbench MPs, at an 8.30am meeting in which the prime minister said he had concluded that he should resign in the interests of the party and the country.

Sir Keir Starmer, Labour leader, said: “Boris Johnson is unfit to govern and he needs to go now. He can’t cling on for months.”

Starmer said that if the Conservatives did not oust Johnson immediately, then Labour would “act in the national interest and bring a vote of no confidence” in the House of Commons.

The contest to succeed Johnson is already under way, with at least a dozen Tory ministers and MPs eyeing a run at the top job. Tory MPs will whittle down the candidates to a shortlist of two, before Conservative members make the final choice.

One senior Tory MP close to the 1922 executive said there was “a great hope” that the shortlist could be completed before the summer recess, which starts on July 21. The MP added a new leader could be chosen by early September.