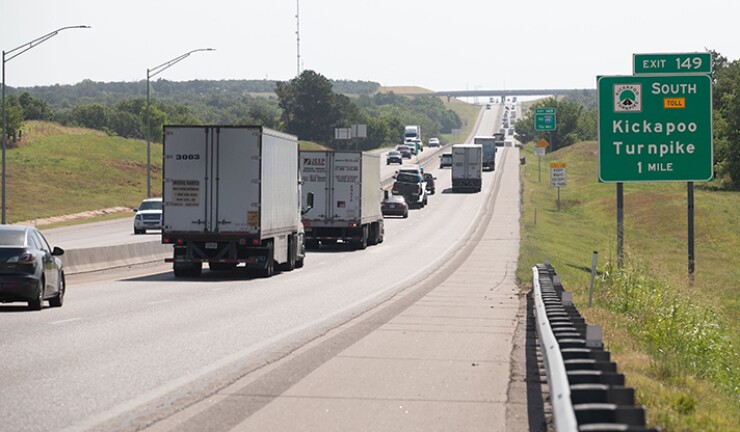 The Oklahoma Turnpike Authority has assembled a financing team and is seeking approval from a state oversight council later this month for bonds to begin funding an expansion project that is the target of two lawsuits.

OTA has asked the Oklahoma Council of Bond Oversight to consider up to $450 million of bonds for new capital projects and $50 million of refunding bonds at its July 28 meeting, according to Alexandra Edwards, the state’s deputy treasurer for debt management.

If approved, OTA would then head to the Oklahoma Supreme Court to request validation of initial debt for the $5 billion, 15-year ACCESS (Advancing and Connecting Communities and Economies Safely Statewide) Oklahoma project.

In June, OTA’s board approved a financing roadmap that authorized the issuance of about $950 million of revenue bonds; launched a request for proposals for a financing team; and directed the agency to seek approval of the bonds from the oversight council and the high court.

If the debt gets all needed approvals, Wendy Smith, OTA’s finance and revenue director, said the agency would sell late this year or in early 2023 about $450 million of new bonds and $50 million of refunding bonds to take out 2020 notes.

After launching an RFP in mid-June for the initial bond sale, the OTA selected Wells Fargo as senior manager and Stifel, Nicolaus & Company; Morgan Stanley; BOK Financial; and Raymond James as co-managers, according to Smith.

Meanwhile, OTA has asked the Cleveland County Circuit Court to dismiss lawsuits filed in May by property owners and others opposed to the project, which plaintiffs claim will destroy or damage thousands of homes and properties.

In its motion to dismiss, OTA said “it is beyond dispute that the Oklahoma Supreme Court has exclusive original jurisdiction to resolve the discrete challenges made by the plaintiffs in this case to OTA’s authority to construct a turnpike project.”

The motion also said the lawsuit should have been filed in Oklahoma County, where OTA is headquartered.

OTA said claims in a second lawsuit, also filed in Cleveland County Court, that it “willingly violated” the Open Meeting Act to accelerate construction and advance financing for the Kickapoo Turnpike extension, were legally insufficient.

Gov. Kevin Stitt officially unveiled ACCESS Oklahoma in February, calling it “a bold investment in our future that provides needed corridor connections and expansions while making travel easier and leading to more economic development across the state.”