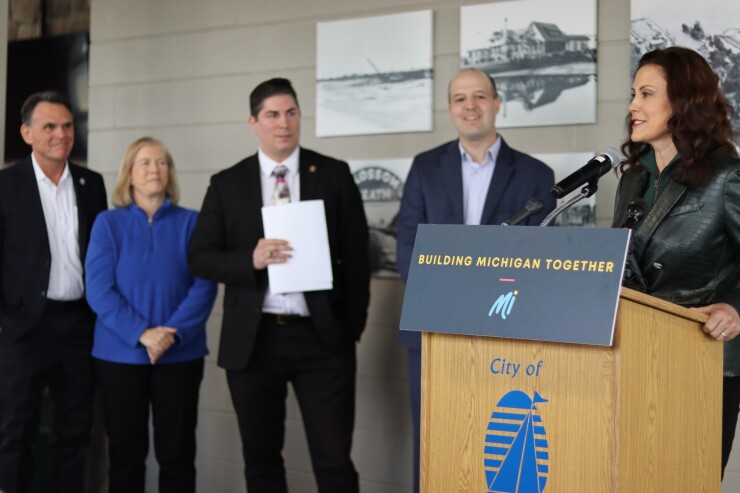 Michigan drew an upgrade from Fitch Ratings over analysts’ view that a rebuilding of reserves and cash balances along with flush tax collections and conservative budgeting strengthens the state’s edge in weathering a future downtown.

The upgrade to AA-plus from AA impacts $1 billion of outstanding general obligation debt and the Michigan School Bond Qualification and Loan Program that backs a total of $14.2 billion of school bonds.

The outlook is stable.

Fitch’s upgrade “reflects the achievement of a materially higher level of fiscal resilience compared to the previous decade, during which time Michigan gradually rebuilt its finances after the Great Recession,” Fitch said. “Michigan’s combined cash, governmental reserves, and rainy-day fund balance are nearing or have surpassed their historic highs as a result of conservative budgeting both during and prior to the pandemic, coupled with solid revenue over-performance.”

“The state has also worked to restrain growth in long-term liabilities and place pension funding on a more sustainable footing,” analysts wrote. “Fitch views Michigan’s higher level of fiscal resilience as sustainable through the next cyclical downturn.”

Fitch praised the state for its willingness to make material budgetary adjustments that at times have included deep spending cuts to maintain structural balance. The state’s rainy-day fund was barren a decade ago but has been rebuilt to at least 10% of spending. Planned deposits will lift the fund to a peak level of $1.6 billion, equal to 12% of revenues and the highest BSF balance since fiscal 2000.

“With the first Fitch upgrade since 2013, the strong credit rating is an affirmation the state is headed in the right direction, saving taxpayers money by lower borrowing costs for upcoming bond issues,” read a Friday statement from Gov. Gretchen Whitmer, a Democrat who is seeking a second term in November.

The latest review published late Thursday comes ahead of a $148.4 million issue being sold by the SBA to fund construction projects at various public colleges and universities, improvements to a veterans’ home run by the state’s department of military affairs, and to finance upgrades to the state capitol including its utility plant and heating system.

The state’s rating benefits from a low direct debt and pension liabilities and the state’s globally important automobile manufacturing sector despite periods of volatility such as during the Great Recession when the industry received federal bailouts to survive. The rising prominence of business and financial services and high-tech sectors offset some of the risks associated with manufacturing’s volatility.

State coffers are flush with both surging tax collections — although they are expected to taper — and $6.5 billion of COVID-19 American Rescue Plan Act relief which is going mostly to non-recurring investments for infrastructure and workforce development. The final $1 billion will be appropriated in the fiscal 2023 budget.

“Liquidity has improved dramatically with the Common Cash Reserve reaching an estimated $22 billion at July 2022,” analysts said. “Even if the state is unable to conserve cash of this magnitude — which Fitch does not expect given a demonstrated need to address urgent social service demands — Fitch anticipates Michigan’s gap-closing capacity will remain well above historical levels through the next downcycle.”

Whitmer recently signed a $76 billion fiscal 2023 budget that is up $6 billion from the current year and $3 billion over her initial proposal. One-time spending items include $1.4 billion to help pay down liabilities of the Michigan Public School Employees Retirement Fund, $800 million of grant funding to improve underfunded municipal pension systems, $850 million for capital spending on state facilities and technology, and $475 million for school infrastructure programs, among other uses.

The kindergarten through 12th grade budget is up $2.6 billion, or 15%, over fiscal 2022 levels while higher education is receiving a 5% hike. Transportation capital spending includes an additional $1.5 billion for bridges and roads.

As Whitmer and lawmakers hashed out a budget package, they had more to work with following the state’s May revenue estimating conference that raised revenue projections for the current fiscal year by $3 billion with an additional $2 billion expected in fiscal 2023.

The new forecast raises revenues through 2024 by a total of $6.8 billion but officials cautioned against overspending as threats to the state’s fiscal momentum loom from the potential for an economic downturn, rising inflation, and the future path of COVID-19.

Officials at the time cautioned that some of the revenue growth is also one-time in nature and that must guide spending decisions or the state risks developing a structural imbalance.

With a deadline on budget passage looming, lawmakers and Whitmer agreed last month on budget package that left $7 billion of unappropriated funds on the table for future debate on tax relief. Whitmer and the legislature’s Republican majority differ on how to dole out that relief.