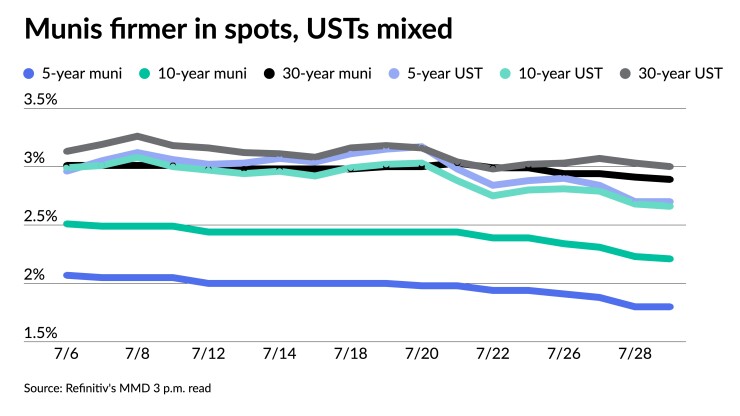 Municipals were steady to firmer in spots to close out a week of lackluster supply, while U.S. Treasuries were mixed and equities rallied.

Municipals will end July in the black with positive returns across all sectors. The Bloomberg Municipal Index shows a 2.49% return in July, moving year-to-date losses lower to 6.71%. High-yield has seen 3.54% positive returns in July and negative 8.64% in 2022. Taxables have returned 1.75% in July, moving losses to 12.46% year to date. Bloomberg’s Impact Index saw 2.86% gains in July and 9.15% losses for the year.

“In our view, the worst for the muni asset class is likely behind us, and we have already likely seen the highs for ratios and yields,” Barclays PLC strategists wrote in a weekly report. “However, because of the likely economic slowdown, we prefer an up-in-quality trade and see the most value in AAs and strong single-As while also expecting investment grade municipals to outperform high yield in 2H22.”

Investors will be greeted Monday with an increase in supply, but not by much from this week’s paltry levels, with the new-issue calendar estimated at $3.915 billion, up from total sales of $1.362 billion.

There are $3.355 billion of negotiated deals on tap and $559.4 million on the competitive calendar.

The primary is led by the $878 million of intermediate lien revenue refunding bonds from the Port of Seattle, Washington, followed by $324 million of Christus Health revenue bonds from Tarrant County Culture Education Facilities Finance Corp., Texas, and $284 million of bonds from the Forney Independent School District, Texas.

Supply continues to disappoint with July’s totals down 32% year over year, led again by a significant drop in taxables and refundings.

Though the lower new-issue supply has helped the market manage through the massive secondary selling pressure that marked the first half of the year.

“For munis, the belly of the curve has been steadily outperforming, and the 5s10s slope is getting close to its 12-month average,” strategists Mikhail Foux, Clare Pickering and Mayur Patel said.

“In our view, extending one’s portfolios is still the correct approach, and the muni curve should significantly bull-flatten at some point this year,” they said.

In the taxable space, Barclays noted the spread differential between taxable munis and corporates has continued to compress, getting close to its 12-month average of six basis points.

“If corporate spreads widen 50-60bp in the next six months, taxables will not be immune, but will likely outperform in a sell-off, especially at current levels, which are close to fair value, versus very rich at the beginning of 2H22,” the report noted.

Further slowing of the economy or reduced Fed’s quantitative tightening would be other catalysts in their view.

“For that reason, we believe there is more value in the longer part of the curve for high-grade munis going forward,” Li and Rogow said.

They noted the long end of the curve suffered the most during 1H22, and many 4% or lower-coupon bonds fell below par and some even triggered de minimis thresholds. ”Among them, some are now rising above par, while others are moving from below de minimis to above de minimis,” they said.

Lynne Funk contributed to this report.