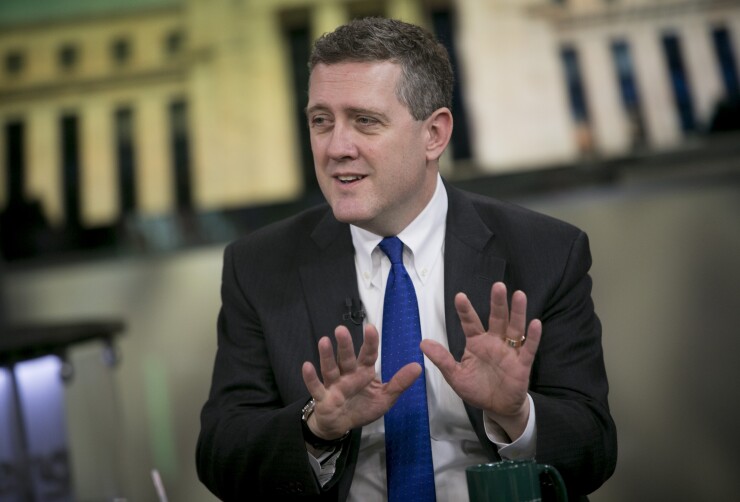 Federal Reserve leaders pledged the central bank would continue an aggressive fight to cool an inflation rate that’s at a four-decade high, even if higher rates cause the risk of recession.

St. Louis Fed Bank President James Bullard said he favors a strategy of “front-loading” big interest-rate hikes, and he wants to end the year at 3.75% to 4%, while his Richmond counterpart, Thomas Barkin, said the central bank was committed to lowering inflation and a recession could happen.

“We still have some ways to go here to get to restrictive monetary policy,” Bullard said in a CNBC interview. “I’ve argued now with the hotter inflation numbers in the spring, we should get to 3.75% to 4% this year. Exactly whether you want to do that at a particular meeting or some other meeting is a great question. I’ve liked front-loading. I think it enhances our inflation-fighting credentials.”

Federal Reserve presidents speaking this week emphasized that inflation at a 40-year high has yet to slow and pushed back against the perception the central bank was pivoting to a less aggressive phase of tightening monetary policy. Fed Chair Jerome Powell last week cited Federal Open Market Committee forecasts that the Fed would raise rates to 3.4% at the end of the year and 3.8% in 2023.

“We’re going to have to see convincing evidence across the board of headline and other measures of core inflation all coming down convincingly before we’ll be able to feel like we’re doing enough,” Bullard said.

Later, he added that the Fed will probably have to keep rates “higher for longer” to see a broad-based slowdown in price growth.

Markets are pricing in interest-rate cuts as soon as the first half of 2023 and some investors took comments by Powell in last week’s press conference as a sign that the Fed could soon become less aggressive.

The Fed raised rates by 75 basis points for a second straight meeting and Powell said another increase of that size would be possible in September. He gave no specific forward guidance and said future rate increases would depend on data and would be decided meeting by meeting.

“There is a path to getting inflation under control,” Barkin said in his separate speech, to the Shenandoah Valley Partnership in Virginia. “But a recession could happen in the process. If one does, we need to keep it in perspective: No one canceled the business cycle.”

Barkin was not specific in describing his desired path of interest rates, but said inflation was unlikely to come down quickly or predictably.

“We may or may not get help from global events and supply chains, but we have the tools, and we have the credibility with households, businesses and markets required to deliver that outcome over time and we will,” he said.

Both Bullard and Barkin said they agreed with Powell’s view that the U.S. was not in a recession, citing strong jobs growth as being more convincing than the two negative quarters of gross domestic product that some see as a sign of a downturn. Bullard said he expects growth in the second half of the year.

“Recession fears are a little inconsistent with an economy adding almost 400,000 jobs a month and with unemployment near its historic low at 3.6%,” Barkin said.

S&P slashes Chicago suburb’s GO rating over default event on unrated bonds
The ‘Invisible House’ In Joshua Tree, California Lists For $18 Million
Stocks making the biggest moves before the bell: Apple, Alphabet, Amazon, Starbucks and more
Stocks making the biggest moves premarket: Tyson Foods, PayPal, Children’s Place and more
Rumor has it that Dogecoin could shift to proof-of-stake — What does that mean for miners?