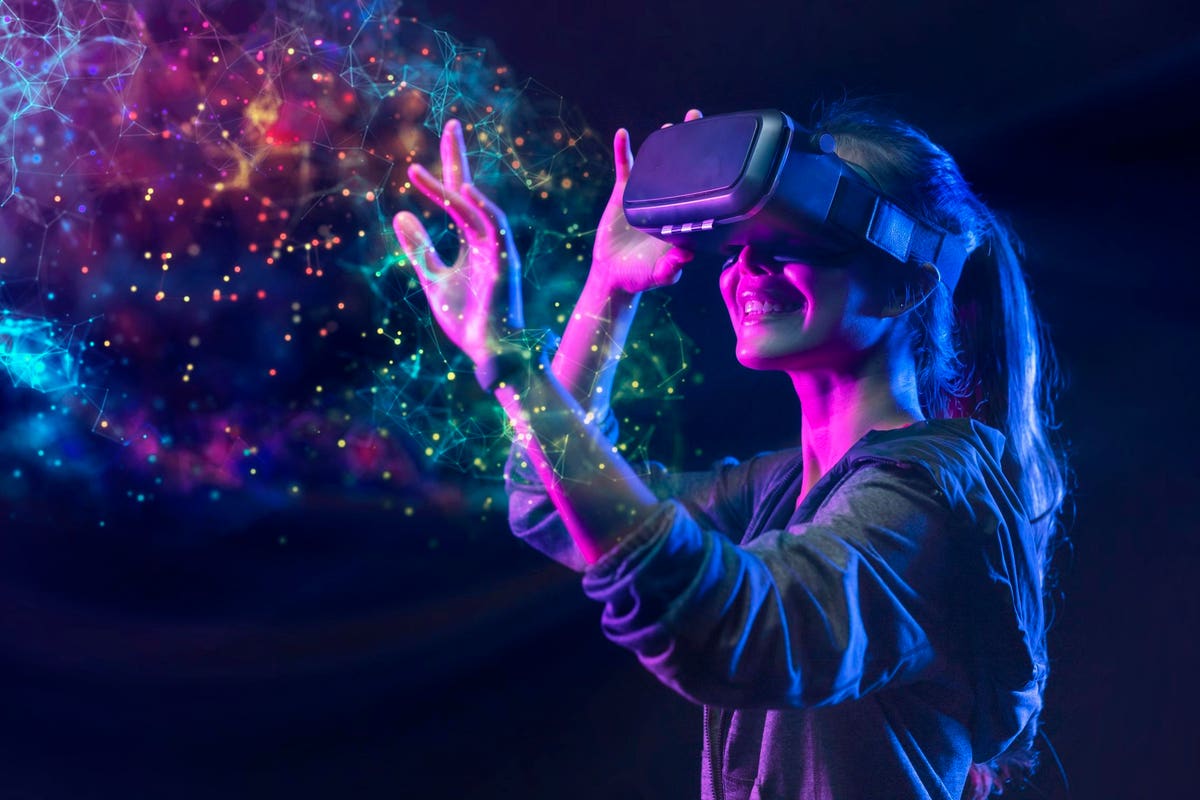 It was a perfect first date. It started with a trip to an amusement park nestled in an alpine valley, where colorful roller coasters wound through the trees. Then the couple played a round of miniature golf before topping the night off with a shared bucket of popcorn at a movie theater. And it all took place in the metaverse. That’s how Samantha M., a 26-year-old from Washington, D.C., met her boyfriend Cayden, who lives in Utah.

The pair connected on a dating app called Nevermet, which helps singles find dates in the world of virtual reality. Since their first rendezvous in March, the couple has connected at least once a week in VRChat, a popular metaverse world, sometimes spending entire days virtually together. The two have yet to meet in person, but they interact outside of the metaverse too, mostly through texting, phone calls and video chats on Discord.

“It’s the closest you can get to being with someone without being with them physically,” Samantha says. “It gives you a chance to meet others and learn more about them personally and on the inside.”

Virtual-reality dating is on the rise, with companies like Nevermet developing new ways to connect people in the Metaverse. But the concept hasn’t been smooth sailing for Match Group and Tinder, its industry-leading app. After 10 months of effort, Match pulled the plug on Tinder’s attempt to build a metaverse dating space. It comes at a tumultuous time for Match, as the company has had to scrap other recent initiatives — including the creation of an in-app currency — as revenue growth slackened once a burst of post-lockdown romance dissipated.

CEO Bernard Kim announced Match’s metaverse-development slowdown on a lackluster Q2 earnings call. Less than a year ago, Tinder revealed plans to develop a metaverse dating space, a move that included the acquisition of Hyperconnect, an artificial intelligence and augmented reality company that was already developing a virtual romance destination called “Single Town.”

“Given uncertainty about the ultimate contours of the metaverse and what will or won’t work, as well as the more challenging operating environment, I’ve instructed the Hyperconnect team to iterate but not invest heavily in metaverse at this time,” Kim said. “We’ll continue to evaluate this space carefully, and we will consider moving forward at the appropriate time, when we have more clarity.”

The change of direction was paired with an announcement that Tinder’s CEO, Renta Nyborg, was stepping down. Nyborg, who became the unit’s first female CEO in September, publicly led the Match Group subsidiary’s drive in the metaverse, dubbing it the “Tinderverse” at the Reuters Next conference in December.

Kim also announced that Tinder was giving up on plans for a virtual currency called Tinder Coins after an unenthusiastic response in test markets. The in-app money could be bought or earned through activity on the app. Users could then exchange the coins – which were not designed as a cryptocurrency – for “super-likes” and other features that can be purchased in the current business model.

Tinder is not the only major dating app to express interest in the metaverse. Bumble, another major player, stated its intention in a November earnings call to prepare for “whatever emerges” in the realm.

Yet while the dating heavyweights do the wallflower thing, more nimble upstarts have taken to the dance floor. Nevermet and rivals Flirtual and Planet Theta are showing the different ways in which metaverse dating apps might work. They mostly operate on the freemium model popular with the traditional heavyweights, where the base service is free but other features are available at a cost.

Nevermet connects virtual-reality enthusiasts, who build profiles including in-depth personal bios and avatars. The company chose not to build its own metaverse destinations, though. In fact, the app is not virtual reality, but a more traditional smartphone application. Once two people match, they are meant to leave the app’s ecosystem to connect in a virtual world of their choosing.

“Our goal is to help connect people to help them form meaningful relationships. And we want to let them decide what worlds they want to go in together to have those experiences,” says Cam Mullen, CEO of Nevermet.

Like Samantha and Cayden, many Nevermet users connect on VRChat, where their custom avatars move through any of the platform’s 25,000 community-created virtual worlds. Samantha’s avatar is a purple-eyed, silver-haired version of herself. Samantha met two past boyfriends on VRChat without the help of Nevermet and says that several of her friends first encountered significant others while socializing on the metaverse platform.

Flirtual, the company with the strongest claim as the first virtual reality dating platform, follows a similar outline to Nevermet. The company sends most of its users to VRChat after they’ve connected on the Flirtual app.

Other metaverse dating apps, like Planet Theta, focus on creating their own virtual worlds in an effort to curate user experiences. The Planet Theta platform, which is currently beta testing and planned for launch in November, connects potential matches via virtual speed dating. The singles are paired up for short, one-minute online chats. If it goes well, they can reconnect for a three-minute coffee date, where they sit in a Planet Theta-designed cafe. After virtual coffee, users will see their dates’ photos and are presented with an option to vote thumbs up or thumbs down. If both parties are amenable, then they can connect for future dates in Planet Theta’s metaverse world, virtually sipping virtual drinks at the couples-only bar or feeding squirrels in the enchanted forest.

This kind of dating allows users to test chemistry immediately through live conversation, something that Planet Theta’s CEO Chris Crew says the brand name dating apps have failed to offer. “You can’t tell if you have any chemistry with somebody from a picture,” Crew says.

While Planet Theta is building its custom VR experience, Crew hopes that users will take time to connect outside of the metaverse, too. “It ultimately ends with you having a relationship with somebody that hopefully you love and ultimately live with, not something where you’re trying to talk endlessly in VR only.”

Nevermet has a similar approach, though some of its users choose to remain in VR. “It varies person by person, but the majority of users, once they form a meaningful relationship and fall in love, most of them will want to eventually meet up in the physical world,” Mullen says.

Mullen and Samantha understand that some people will struggle to take metaverse dating seriously. But that group may soon be a minority. Nevermet has “made more than 200,000 new metaverse relationships,” Mullen says.

“At the end of the day, you’re sitting in your room by yourself, and you probably look kind of silly. But inside the headset, you’re with the person that you love, and that’s really cool,” Samantha said.