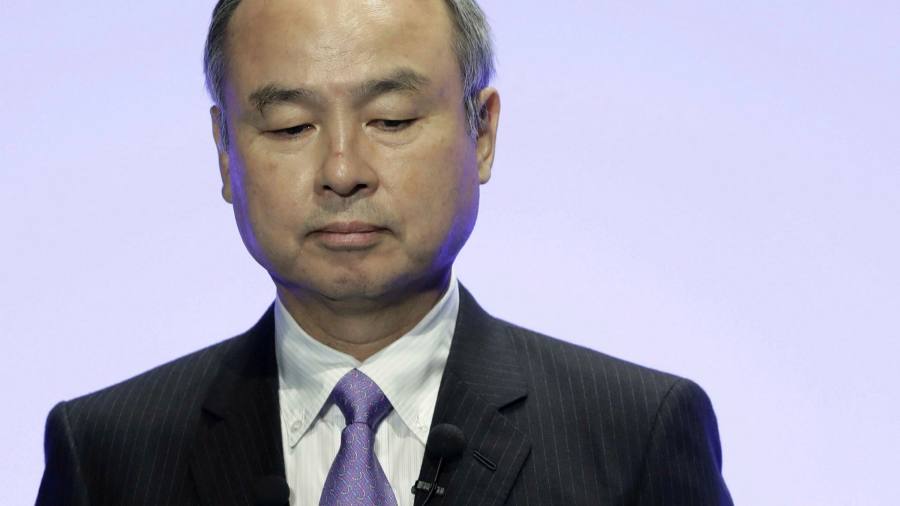 In a press conference that Son himself described as “depressing”, he admitted that his famously aggressive global investment strategy should have been more selective, adding: “I am ashamed of myself for being so elated by big profits in the past.”

Son said on Monday that SoftBank would now subject itself to a “dramatic” group-wide cost-cutting exercise, after a ¥7tn investment gain at the two Vision Funds almost completely reversed over the past six months.

He also said the Japanese group has started talks to sell Fortress Investment Group, the asset manager it bought in 2017. “We are prepared to listen to potential buyers with an open mind,” said Son.

As well as being hit by the global technology rout during the April to June quarter, SoftBank suffered a ¥820bn foreign exchange loss caused by the sharp plunge in the yen against the US dollar, which fell to a 24-year low in July. That loss reflected the fact that about half of SoftBank’s total borrowings are dollar denominated.

SoftBank’s Vision Funds reported a combined loss of ¥2.3tn in the April to June period, following a then-record ¥2.2tn loss in the previous quarter. “If we had been a little more selective and invested properly, it would not have hurt as much,” said Son.

In keeping with a tradition of eccentric presentations, Son explained the current state of his company with reference to a portrait of Ieyasu Tokugawa, the 17th-century shogun and national unifier who suffered huge losses in a battle in order not to lose face with his enemies.

“I want to reflect on this and remember it as a warning,” said Son.

In another critical admission, Son openly questioned the unicorn-hunting investment strategy of the $100bn Vision Fund, a pool of money with which Son had wanted to lay the foundations of a 300-year plan. “If we pursue our vision unilaterally, we risk annihilation. That must be avoided at all costs,” he said.

SoftBank attributed its woes to “deepening challenges” in the macroeconomic environment, inflation, central bank policy responses and geopolitical tensions The huge losses follow Son’s pledge in May that he would play “defence” in the face of worsening conditions.

The company described the recent rout as a “market correction of historic proportions”. But in his presentation, Son acknowledged that the listed portion of the Vision Fund portfolios had significantly underperformed.

“For private portfolio companies, the fair value decreased in a wide range of investments, reflecting markdowns of those with recent funding rounds and/or weaker performance, as well as share price declines in market comparable companies,” said SoftBank’s earnings statement.

Son added that prepaid forward contracts using shares of Alibaba, with which the group raised $10.5bn in the latest quarter, provided the group with a “good level of cash position”.

When asked whether there was still room to use the Alibaba shares for fundraising, Son said he was “considering matters” in light of the share price and SoftBank’s own financial situation, without elaborating further.

Son declined to comment on the issue of UK-based chipmaker Arm and the question of whether SoftBank can be convinced by the British government to consider listing in London as well as the US. He said things were going well at Arm, but added that “this is the only thing I can say today”.

Video: SoftBank: piecing the puzzle together | FT Film
This article was originally published by Www.ft.com. Read the original article here.