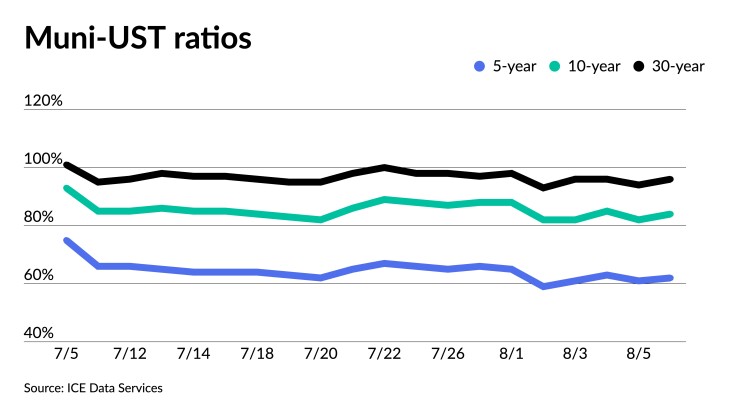 It was a steady start to the week, with municipal triple-A yield curves little changed, U.S. Treasuries took a break from last week’s volatility to close out firmer across the curve while equities were mixed.

“It looked like August was starting to look just like July as yields fell for the first four days of the week but with the higher-than-expected jobs number on Friday, we did see yields rise considerably on Friday,” noted Jason Wong, vice president of municipals at AmeriVet Securities.

But munis outperformed Treasuries as buyers are continuing to favor the asset class with 10-year ratios now around 80% compared to 85.44% the prior week, Wong noted.

Weekly supply is holding below $5 billion, reinvestment needs are still in effect from large redemptions and fund flows are leaning more positive, she said.

With short rates moving in a bear flattener trade, the first week of August brought a 20-basis point correction in the 1-year MMD yield.

“We did see the curve flatten slightly by 3.3 basis points to 129 basis points as the relative cheapness on the long end of the curve has brought back buyers as the short end continues to be rich compared to the rest of the curve” Wong said.

Short ratios, Olsan said, are now in the process of normalizing back toward 60%/UST after falling through 50%, creating a better bias for buyers.

“Specific buys and sells, though, were quite granular in nature, depending on varied motivations of buyers or sellers,” Olsan said. ”Nevertheless, wider spreads and higher yields in quality bonds such as AAA GOs and pre-refunded credits are correcting some of the heavy push that occurred through June and July.”

As the larger August redemption period winds down before September, Olsan said supply is ticking up with several issues over $250 million. Bond Buyer 30-day visible supply sits at $14.37 billion.

Olsan highlights this week’s Minnesota’s GO sale, which offers a total of $480 million with a maximum maturity of 20 years.

“Considering the flatness of the curve out to 2040 or so (95% yield capture at 20 years), demand should be firm for the state’s issue,” she said.

At the lower end of investment grades, Philadelphia will price A1/A-plus water/wastewater bonds due out to 2042.

“A general spread tightening in single-A utility credits this year has led to smaller losses in the category — an A-rated water index is down 5.07%,” she said.

Many investors believe the majority of inflation pressures are behind us, despite tough talk by several Fed officials after the last Fed rate hike, a report from John Miller and Anders Persson of Nuveen said.

“That may mean future Fed hikes will be lower than many currently fear,” they said. They agree inflation fears should begin to cool, meaning Treasury bonds will likely remain well-bid for the foreseeable future.

Municipal bonds should also remain well-bid as a supply/demand imbalance continues, they said.

“Supply should remain light through Labor Day in the U.S., yet billions of dollars of reinvestment money remains to be redeployed,” the report said. “We believe munis also represent fair value at these levels.”

Treasuries were firmer at the close.

The Board of Education for the Nebo School District, Utah, is set to sell $101.230 million of general obligation school building and refunding bonds, Series 2022, at 11:30 a.m. Tuesday.

Mr.C-Branded Residences Come To The Dubai Waterfront
How to make the buy vs. rent housing decision as mortgage rates surge
New Jersey receives rating outlook lift from Moody’s
American homebuyers are finding UK bargains, discounted by a weaker pound
Is it Bitcoin’s time to shine? British pound drops to all-time low against the dollar