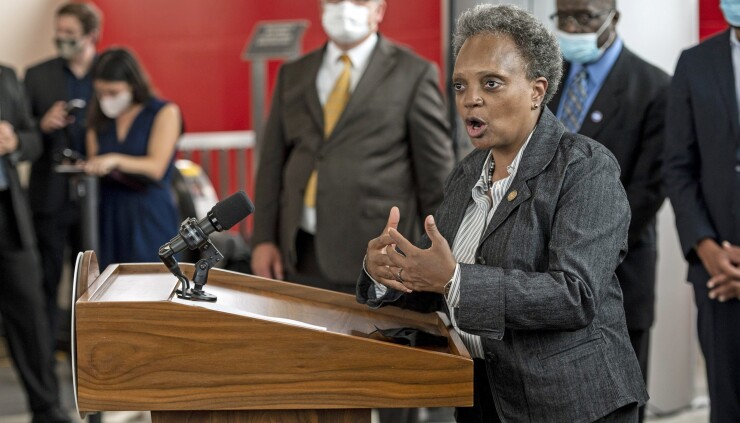 Chicago’s heads into 2023 budget season with a $127.9 million gap to close, offering the market a key fiscal update as the buy-side heads to town for the city’s annual investors’ conference.

The shortfall unveiled by Mayor Lori Lightfoot and her finance team Wednesday marks a sharp decline from the last three years. Lightfoot came into office in 2019 staring at a then-record gap of more than $800 million for 2020.

With the COVID-19 pandemic driving up expenses and tanking revenues, the gap ballooned to $1.2 billion heading into 2021. The number shrunk last year but remained daunting at more than $700 million.

The projected deficit next year stems from rising expenses of $228 million due to $67 million more that’s needed for pension contributions, $55 million for contractual services and other expenses that are expected to rise. Revenues will grow by $100 million from various intergovernmental sources and recreation and business taxes. The city in May had put the projected deficit at $306 million and last year’s forecast warned of an $867 million shortfall for 2023.

“Over the past three years we have faced daunting fiscal challenges. Despite the pandemic and resulting economic meltdown and related loss of revenue we have persevered … and have cleared the city’s budget of decades of deferred liabilities,” Lightfoot said. “We are now living within our means and started on the true road to financial stability and recovery.”

The city will look to close the gap through departmental efficiencies, financial reforms, and a tax-increment financing surplus declaration that also benefit other taxing districts, such as the Chicago Public Schools. The city has for years declared a surplus, but is still weighing the sizing for 2023.

In announcing the annual forecast that kicks off budget season, Lightfoot said the city would seek a property tax hike tied to increases in the consumer price index based on 2.5% inflationary growth that would raise $42.7 million for the 2023 budget. While inflation exceeds 5%, the change implemented last year caps the increase at 5%.

The City Council last year reluctantly agreed to Lightfoot’s shift that allows the city to raise the tax levy based on the consumer price index annually, a change billed as one that was needed to accommodate rising pension payments while avoiding big hikes every few years that are tougher for taxpayers and council members to swallow. The city phased in over four years a record $540 million in 2015 to deal with rising pension costs.

The additional property taxes along with $40 million received from Bally’s in an upfront payment after its selection by the city to hold its first and only casino license will reduce pressure on the city’s general fund, known as the corporate fund, by $82.7 million for pension payments.

Lightfoot called the 2.5% “reasonable” saying the 5% would hit taxpayers too hard. The administration likely will face council pressure to cancel any increase but the finance team signaled some hike is needed.

Across all funds, the city will make a $2.37 billion payment for its four pension funds, up from $2.28 billion this year. Payments inch up to $2.4 billion in 2024 and $2.5 billion in 2025, although those projections are based on the latest actuarial results of the funds which could take investment hits this year. The city completed a ramp to an actuarially based contribution this year, so hikes are expected to moderate in coming years.

Once the casino is up and running in the coming years, it’s expected to generate at least $200 million annually with those funds required to go toward pensions, which in turn eases pressures on the city’s roughly $5 billion corporate fund.

The city projects closing out the current budget with a $134 surplus due to higher-than-expected revenues and cost savings, with $130 million of that will go into the assigned fund balance, providing a cushion that could be tapped in 2023.

The city held $730 million in its asset leases reserves, primarily from its reserve set up with proceeds of its Skyway toll bridge concession in 2005. Total reserves when also counting a liquidity account will be maintained at $1.1 billion which Bennett called a record level and “sign of fiscal strength.”

Bennett noted that the numbers are down materially from prior-year estimates — which warned of the potential for billion-dollar gaps — and that future estimates account for the end of federal pandemic relief money, pension contributions, and other liabilities. The numbers for 2023 are conservative giving the city some cushion if a recession takes hold, she said.

While gaps are projected in out years and the 2023 budget will include some one-time revenues “our expectation is that we are not going to have to go to major tax increases to cover major expenditure ramps … I think we have reached it,” Bennett said of structural budgetary balance.

The city intends to tap $152.4 million of American Rescue Plan Act funds for its corporate fund in 2023, down from $385 million this year.

The city’s total revenue-backed and general obligation debt will fall to $24.1 billion next year from $24.9 billion but debt service rises to $2 billion from $1.9 billion. Bennett said the city has plans for several billion of new-money and refunding deals planned — including a $1.7 billion O’Hare International Airport issue — as well as GO, water, and wastewater deals.

By trimming the debt load over the last three years, Bennett said room has been made for the new borrowing so the city is ultimately “keeping our debt load even and stable.”

Lightfoot, who is seeking a second term next year, used the occasion of the forecast to recap the city’s fiscal trajectory since taking office in 2019 pointing to completion of the pension funding payment ramp, the elimination of scoop-and-toss debt restructuring, trimming the city’s overall debt levels, awarding the first casino license, striking a regional suburban water deal, and new community investments through the Invest South/West and the $1.2 billion Chicago Recovery Plan.

The Chicago Recovery Plan relies on $660 million of borrowing with the remainder coming from the city’s $1.9 billion of ARPA relief.

While the city has been stung by some high-profile corporate departures — Citadel and Boeing — it has seen more than 170 corporate relocations or expansions, including Google and Kellogg.

Lightfoot also highlighted the slight increase in funded ratios for the pension funds based on the 2021 results. Net pension liabilities rose to $33.7 billion from $32.96 billion for 2020 funded ratios rose for the first time in 15 years.

The city will face questions from investors Thursday during the event over how it intends to maintain balance once federal funds are exhausted, efforts to combat crime, the potential long-term pandemic impacts on the commercial real estate market, especially downtown, and long-term pension plans.

“The pension funding ratios are still very weak,” said Richard Ciccarone, president of Merritt Research Services. “I think they need a plan to step up payments.

“We are also concerned about economic activity not just how many people are back downtown, but also headquarters and real estate foreclosures because that will haunt them later.”