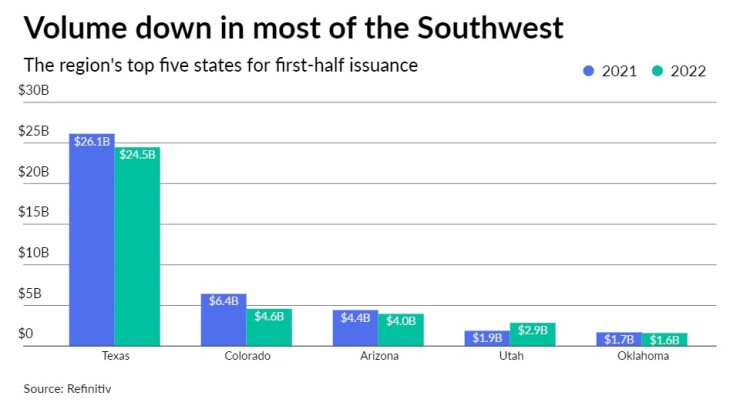 Municipal bond issuance in the Southwest shrank in the first half of 2022, while in Texas some big Wall Street banks dropped out of the top underwriter rankings in the wake of two state laws restricting access to government contracts.

In the first six months, municipal bond issuers in the eight-state region sold $40.8 billion in 1,334 deals, compared to $45.4 billion in 1,627 deals during the same period in 2021, according to Refinitiv data.

Noe Hinojosa, Jr., chairman, president, and CEO of Dallas-based advisory and underwriting firm Estrada Hinojosa, said a climb in interest rates made deals, particularly taxable advance refundings, less attractive, although he expects sales of new debt approved in May by Texas voters to pick up.

“It’s hard to tell where we’re going to be in another two, three months as far as interest rates are concerned,” he said.

David Medanich, co-head of public finance at Hilltop Securities, said while taxable refundings “really went from making sense to not making sense at all,” tax-exempt refundings of callable bonds could be looming.

“Maybe later in the year we’ll still see there are current refundings that might work simply because it’s going to be a tax-exempt rate versus a taxable rate,” he said.

New money issuance in the Southwest was up 25.8% for the first half at $32.54 billion and muni market participants said explosive population growth in states like Texas and Arizona should keep a pipeline of new bonds going this year.

“Most of these political subdivisions are not as worried about what the interest rate is as they are about having the ability to provide facilities for their new growth,” Medanich said. “So I think the new money is going to be pretty strong.”

Texas supplied by far the most bonds in the region in the year’s first half with $24.47 billion in 629 issues, trailing only California and New York nationally.

It was followed by Colorado at $4.58 billion in 162 issues, and Arizona at $3.96 billion in 72 issues, Refinitiv data showed. Issuance decreased in all eight states except Utah, where it jumped by 51.4% to $2.85 billion, aided by a $797.6 million Intermountain Power Agency bond sale to help finance a transition from a coal-fired plant to electricity generation using natural gas and hydrogen.

Southwest issuance in the second half of the year will include sizable taxable securitization deals aimed at spreading out huge costs incurred by gas and electric utilities during 2021’s Winter Storm Uri.

The Texas Natural Gas Securitization Finance Corporation plans a $3.4 billion issue, while the Oklahoma Development Finance Authority has four ratepayer-backed deals, including $761.6 million of bonds for its largest electric utility that sold in July and a $1.354 billion issue for Oklahoma Natural Gas Company scheduled to price this week.

Stifel Nicolaus ranked second among advisors in the first half of 2022 with $2.95 billion of bonds, while PFM Financial Advisors with $2.4 billion was in fourth place.

In underwriter rankings, there was a big shake up in Texas where as of Sept. 1, companies, including muni bond underwriters, are required to verify they don’t “discriminate” against the firearm industry or “boycott” energy firms in order to gain state and local government contracts.

Citigroup, which along with some other major banks announced firearm policies in 2018 after a gunman murdered 17 people at a Parkland, Florida, high school, has continued to operate in Texas, most notably as senior manager for a big Dallas-Fort Worth International Airport bond sale in April.

The bank was in fifth place in the first half of both 2021 and 2022. But JP Morgan, Bank of America, and Morgan Stanley are no longer in the top four in the Lone Star State. For the first six months of 2022, Piper Sandler ranked first, credited with $2.47 billion, followed by Jefferies, RBC Capital Markets, and Raymond James.

More banks could be forced to drop out of the Texas market if they land on the state comptroller‘s list, due out this month, of companies found to be boycotting fossil fuel businesses.

Barclays, RBC, and Morgan Stanley, which were contacted by the comptroller, were dropped from a Texas Department of Housing and Community Affairs May bond sale after the state attorney general’s office said verifications of compliance with the boycott law were under review.

Meanwhile, Morgan Stanley, Barclays, and UBS, which was also on the comptroller’s contact list, were tapped in May for the upcoming Texas natural gas securitization deal led by Jefferies.

Ajay Thomas, head of public finance at FHN Financial Capital Markets, said as the muni market  “anxiously” awaits the comptroller’s list of boycotters, the laws have not had a significant impact on Texas debt sales or led to a dearth of underwriters bidding on competitive deals.

“Regional firms have stepped up and other underwriters have stepped into the void and been able to execute as good a pricing as could be done before,” he said.

A research paper found the two laws may increase borrowing costs for Texas issuers due to less competition among underwriters.

For the region, RBC was the top underwriter with $4.4 billion of bonds, Piper Sandler was second with $3.88 billion, Raymond James was third with $2.4 billion, Citigroup was fourth with $2.35 billion, and Jefferies was fifth with $2.3 billion.

There was some reshuffling in the region’s bond counsel rankings with McCall Parkhurst & Horton and Bracewell holding onto first and second place respectively and Orrick Herrington & Sutcliffe moving up from to third place from sixth in 2021’s first half. Norton Rose Fulbright fell to fourth place from third place and Gilmore & Bell slipped to fifth from fourth.

Education was the most-common purpose by far for bonds, totaling $17 billion, according to Refinitiv, with general purpose coming in second at $8.46 billion.

Dallas-Fort Worth International Airport was the region’s top issuer with $1.188 billion of bonds that marked its first new debt issuance since 2017. That was also the largest single deal of the first half in the Southwest.

San Antonio followed among issuers with nearly $883 million of bonds, Utah’s Intermountain Power was third, and Dallas Independent School District was fourth with $672 million of bonds.