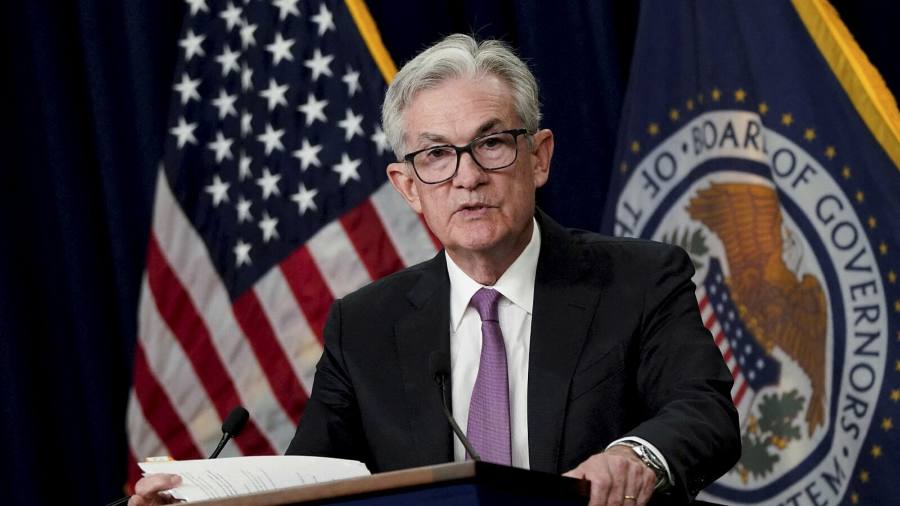 Federal Reserve officials discussed the need to keep interest rates at levels that restrict the US economy “for some time” in a bid to contain the highest inflation in roughly 40 years, according to an account of their most recent meeting.

Minutes from the meeting, at which the US central bank raised its benchmark policy rate by 0.75 percentage points for the second month in a row, signalled policymakers were intent on pressing ahead with tightening monetary policy despite early signs the economy is cooling down.

Officials noted inflation had shown little sign of improving and that the “bulk” of the effect of rate rises so far had not yet had a significant effect, according to the minutes. That is likely to mean inflation stays “uncomfortably high for some time”.

Given the enormity of the inflation problem and “upside risks” to the outlook for price growth, officials backed raising interest rates to the point where they act as a drag on economic growth.

Raising rates to such a level would allow the Fed to increase them even “further, to appropriately restrictive levels, if inflation were to run higher than expected”, the minutes noted.

Some officials signalled that once rates had been raised to the point where they were cooling down the economy “sufficiently” it would probably “be appropriate to maintain that level to ensure that inflation was firmly on a path back” to the Fed’s target of 2 per cent.

After July’s rate rise, the Fed is in the throes of its most aggressive cycle of monetary tightening since 1981. The rate increase was implemented just a day before data showed the US economy contracting for a second consecutive quarter, a common marker of a recession.

In just four months, it has raised its benchmark policy rate from near zero to a target range of 2.25 per cent to 2.5 per cent.

At this level, the federal funds rate is in line with most officials’ estimates of a “neutral” policy setting for when inflation is running at 2 per cent, meaning that it neither stimulates nor restrains economic activity.

Top officials are actively debating whether a third successive 0.75 percentage point rate rise at the next policy meeting in September is needed or if the Fed can start implementing smaller increases at future meetings.

Fed chair Jay Powell said at the press conference following the July announcement that as the central bank continues to tighten monetary policy, “it likely will become appropriate to slow the pace of increases”.

Financial markets seized on the comment — even though Powell did not rule out “another unusually large increase” in September — and US stocks and other risky assets rallied sharply.

The market rally has gathered steam in recent weeks, easing financial conditions for consumers and companies and counteracting some of the effects of the tightening implemented by the Fed.

Following the release of the minutes on Wednesday, Treasury yields dipped and stocks rose as investors interpreted the minutes as dovish. Expectations of where the Fed’s key interest rate would stand at the end of the year dipped slightly from 3.6 per cent to roughly 3.5 per cent.

Some members of the Federal Open Market Committee and other Fed presidents have pushed back on the notion that the central bank will rein in its aggressive approach, instead emphasising their commitment to push rates well into restrictive territory.

The minutes suggested Fed officials are increasingly of the view that there might need to be job losses and an economic downturn if the central bank is to stamp out inflation, with a “moderate” increase in unemployment from the current level of 3.5 per cent, which is historically low.

Many participants did warn, however, of the risk that the Fed could tighten monetary policy too aggressively, but officials still appeared to be concerned about doing too little rather than too much.

In an interview with the Financial Times last week, San Francisco Fed president Mary Daly said the central bank is “not near done yet” in its fight against inflation. She added that it will need to see clear evidence that consumer price growth is slowing substantially before considering any let-up in the rate-rising cycle.

According to the latest inflation data, there was no increase in consumer price growth between June and July and a slower annual rate of 8.5 per cent. That followed a surprisingly strong jobs report the previous week, which showed that the US economy added 528,000 positions in July.

Daly said she is inclined to support a half-point rate rise next month but is “open-minded” about another 0.75 percentage point adjustment.