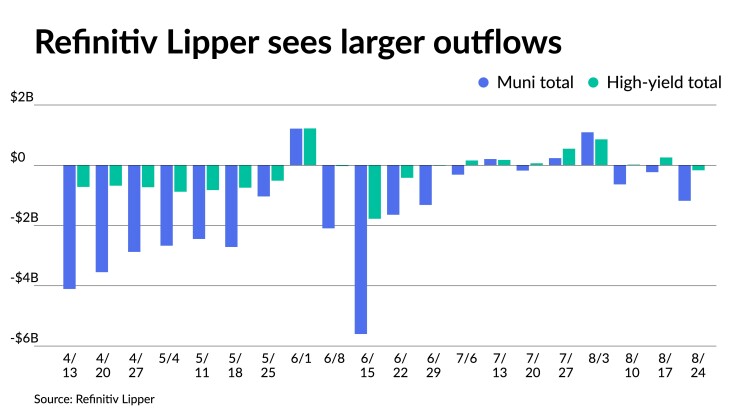 Municipals were mixed Thursday as the market took a breather ahead of Fed Chair Jerome Powell’s Jackson Hole speech, while U.S. Treasuries improved five years and out and equities ended in the black.

Outflows from municipal bond mutual funds intensified as investors pulled $1.180 billion out of funds in the latest week, versus the $229.263 million of outflows the prior week, according to Refinitiv Lipper data.

Ahead of Jackson Hole, investors are bracing for volatility, said Andy Sparks, head of portfolio management research at MSCI.

“Bonds and equities generally continue to move in the same direction, just as they have since September 2021,” he said. “But rather than going down, as they did earlier in the year, they have both rallied since mid-June.”

But while Powell has “talked tough” about battling inflation, “futures market expectations continue to point to Fed easing in 2023,” he said.

“This runs counter to the Fed’s 2023 projections for the Fed Funds rate,” Sparks said. “If the Fed truly wants to re-align market expectations, it should clearly — without equivocation — state that 2023 easing is highly unlikely.”

The market, he noted, is looking for a consistent policy. “Raising rates and then allowing the market to believe it may soon begin lowering rates could undermine Fed credibility with market participants,” he said.

Phill Nelson, head of asset allocation at NEPC, said he doesn’t expect major surprises coming out of the meeting.

“That said, internally, the Fed is probably going to be struggling as, on one hand, we have a really strong job report — the sign of a healthy economy that’s close to overheating — and, on the other hand, growth indicators — GDP and spending — that underscore economic weakness,” he noted. “It will be challenging to reconcile the two and manage the path of rate increases in the face of these contradictory forces.”

A more attractive asset class
Spreads, ratios and nominal yields have gotten much more attractive than they were earlier this summer, but still have room to provide even more opportunity, noted Jason Ware, head of municipal trading at InspereX.

“We are coming off a three-month period this summer of extremely low nominal yields and ratios after a large muni redemption cycle in the face of massive inflation and two major Fed cuts that took us off historically low spreads, nominal yields, and ratios to some of the highest we have seen in years,” Ware said.

“With the drastic shifts in which the market interprets and anticipates Fed sentiment, these hawkish environments combined with supply provide great buying opportunities,” he added.

Ware, whose firm provides fixed income market participants with cloud-tech tools and market-linked product education to better execute their trading strategies and manage their portfolios, noted that it seems as if the market is in “pretty early stages” of the supply uptick coming out of the summer and the market seems to have pivoted back to a hawkish expectation back above a 3% on the 10-year benchmark.

“The low nominal yields we were carried to over the summer drove us to unattractive ratios and nominal yields, which sucked a lot of the volume out of the secondary market and continues to be a drag,” Ware said.

“Over the past week and leading into this week we have started to move the other way and the more attractive the ratios and nominal yields get the more interested parties we have,” he said, noting that there is demand for tax-exempt debt “at the right prices.”

He said a growing calendar this week and last, as well as the market sentiment on the Federal Reserve pivoting back to hawkish, has generated a noticeable market reaction.

The activity has “influenced significant front end cuts on [triple-A scales] where those needing to raise money have primarily been sellers; a lot less liquidity on longer-dated paper, and spread widening on perceived less liquid credits and structures — for low coupons and lease revenue among other similar structures — all creating a much weaker tone,” Ware said.

Credit and rates are also noteworthy, he said.

Current credit fundamentals are strong due to large amounts of cash from stimulus funds, while the current rate environment and expectations for higher rates will make borrowing more expensive, according to Ware.

“Entities without strong balance sheets and revenue generating prospects going forward can be vulnerable, which could create some spread widening and credit deterioration in the medium to longer term,” he said. “This makes us cautious at the moment, sticking to strong liquid credits/structures and without a very large appetite for duration.”

“These buyers tend to stick to shorter duration typically 10 years and less,” he noted. “Longer duration has not been in favor, but is starting to become more favorable as the need to digest more significant new issue supply and hawkish Fed tones within the market force spreads to widen and nominal yields higher.”

At the same time, investors should not shy away from periods of dislocation and should maintain powder for these moments, according to Ware.

“Coming off the heels of muni yields getting sucked into a vacuum in this economic environment of uncertainty and shifting sentiment it seems to be that it was the time to be patient, stay liquid, and wait for the coming opportunity and prospects of higher yields, better ratios, and wider spreads,” Ware said.

The four-week moving average was at negative $237.526 million from positive $116.502 million in the previous week.

Proceeds from its $867 million negotiated issue of tax-exempt fixed-rate bonds and roughly $68 million of taxable fixed-rates will be used to refund certain outstanding bonds for savings.

The tax-exempt bonds were priced led by book-running lead manager Ramirez & Co. with Citigroup and Jefferies as co-senior managers.

The refunding will net about $97 million in total debt service savings, which is spread evenly across fiscal 2023 through 2026.

TFA also competitively sold around $68 million of taxables. Out of 10 bidders, RBC Capital Markets won the deal with a true interest cost of 3.554%.

Chip Barnett contributed to this story.