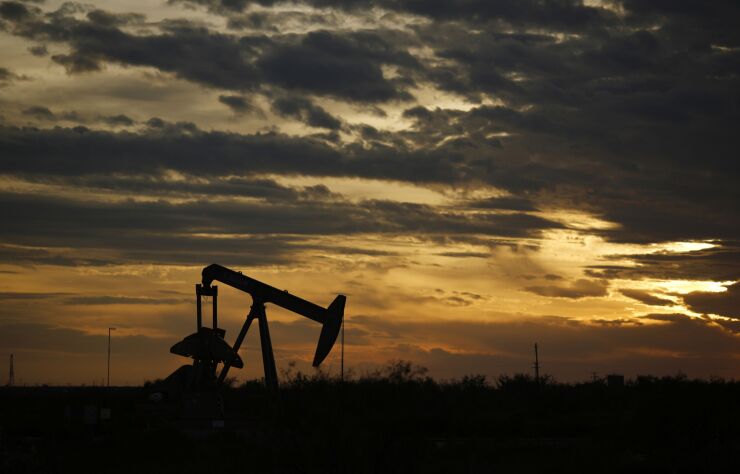 UBS voluntarily resigned as a co-manager from a Texas city bond issue that priced this week in the wake of the company’s placement on the state comptroller’s list of fossil fuel industry boycotters.

Kerrville, Texas, Finance Director Julie Behrens confirmed on Friday that UBS had “voluntarily withdrawn” from the city’s $44.4 million general obligation bond issue. The bonds were priced on Tuesday through FHN Financial Capital Markets with UBS and Raymond James as co-managers.

UBS Group was the only bank that underwrites municipal bonds on the list released Wednesday of 10 financial companies determined to be “boycotting” energy businesses under a law aimed at protecting Texas’ oil and natural gas industry.

“We firmly disagree with the comptroller’s decision to include UBS on this list, which is not substantive and will be harmful to Texas issuers and their constituents,” UBS said in a statement on Friday. “We are assessing the announcement, but the fact that our parent entity has been listed does not necessarily preclude a subsidiary from being a contracting party.”

The law that took effect Sept. 1 requires companies to verify they do not “boycott” energy businesses in order to obtain contracts valued at $100,000 or more with the state or local governments. UBS had submitted a verification in late September 2021, according to the Municipal Advisory Council of Texas website.

In an interview Thursday with The Bond Buyer, Texas Comptroller Glenn Hegar said that UBS had been in touch with his staff following the list’s release.

“We’re happy to have a conversation with them, happy to get more information,” he said. “I think that’s going to be a continual discussion with all companies.”
Hegar also said the list of the 10 company-wide boycotters, which mainly consists of non-U.S. financial companies, may expand or contract in the future.

“It’s not set in stone perpetually forever,” he said. “This is a continual review that we’re doing as we get better information, more information.”

Certain investment funds offered by Goldman Sachs, J.P. Morgan, RBC, and UBS were among nearly 350 on a second list the comptroller’s office compiled for divestment purposes. Many of them are funds with stated ESG or sustainability objectives.

Those four companies, along with other muni investment banks Barclays, Morgan Stanley, and Wells Fargo, were among 158 financial firms that received inquiries from the comptroller earlier this year.

Tom Currah, the state’s associate deputy comptroller, said it was up to local governments and ultimately the Texas Attorney General’s Office, which approves debt issuances, to determine how to treat underwriters included on the list of boycotters.

Hegar said investment banks could still provide verifications even if funds offered by their companies are on the divestment list.

In April, the attorney general advised bond counsel that investment banks’ verifications of being in compliance with the boycott law were under review due to the comptroller’s inquiry. It further stated that contracts that extend beyond the review period “should allow the issuer to find a replacement should the company become a listed company after the review period without penalty to the issuer.”

Despite uncertainty if any of the banks would land up on the boycott list, the Texas Natural Gas Securitization Finance Corporation in May selected Morgan Stanley as a co-senior manager and Barclays and UBS as co-managers for $3.4 billion of taxable bonds it plans to sell later this year.

The corporation’s next meeting is scheduled for Thursday.

UBS is also a co-manager for a $118.5 million Laredo, Texas, waterworks and sewer system revenue bond issue pricing next week. The city’s finance director did not immediately respond to a request for comment.

The Texas law says “boycott energy company” means “without an ordinary business purpose, refusing to deal with, terminating business activities with, or otherwise taking any action that is intended to penalize, inflict economic harm on, or limit commercial relations with a company” that produces, sells, or moves fossil fuels.