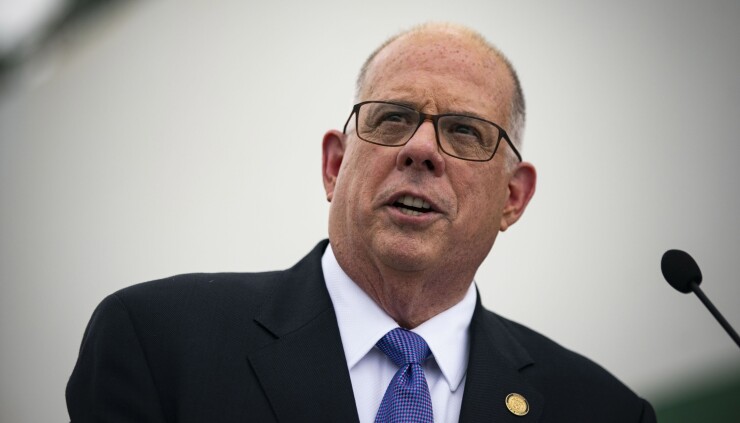 Gov. Larry Hogan’s signature project, which he hopes to deliver as a public private partnership, can now move toward finalizing a 50-year contract with Accelerate Maryland Partners, a consortium that’s led by Australian firms Transurban and Macquarie Infrastructure.

Called Op Lanes Maryland, the project would add four high occupancy toll lanes to I-495 and I-270 which would link to Virginia’s HOT lanes.

Hogan called it the “most important transportation project for the National Capital Region in the last 50 years,” and said it would address “one of the worst traffic bottlenecks in the country” while expanding transit, bike and pedestrian infrastructure.

The state’s Board of Public Works, composed of the governor, comptroller and treasurer, still needs to approve the P3. The board last year approved a predevelopment agreement with the private consortium by a vote of 2-1, with then-State Treasurer Nancy Kopp voting against it.

The Hogan administration has said it will seek approval from the board this fall, before he exits office in January.

The federal Record of Decision is the formal approval of the environmental impact statement and is necessary to move the project forward. The Maryland Department of Transportation will now begin to work with the private team on predevelopment work for the first phase, according to the ROD.

The approval comes after a brief delay past the original Aug. 5 deadline that prompted Hogan to send a letter to President Biden and Transportation Secretary Pete Buttigieg, calling the delay politically motivated and threatening legal action.

Hogan repeated his concerns about delays leading to cost increases in his Thursday statement. “As I emphasized in my discussions with Secretary Buttigieg, years of federal bureaucratic delays — along with political stall tactics by Montgomery County politicians ignoring the will of their constituents — have significantly increased the costs and hurdles for the project,” he said. “As a result, we have applied for a federal grant to help in mitigating the costs of these needless delays.”

The capital region is the most congested in the country based on annual delay and congestion per auto commuter, according to the ROD.

Opponents have five months to file lawsuits to try to block the project. Also on the legal front, the project faces a challenge from team that lost out on the bid.

Singapore’s Sentosa Cove Rallies For A Resurgence
Towns Where Million-Dollar Homes Are Practically The Norm
The impact of the Wintermute hack could have been worse than 3AC, Voyager and Celsius — Here is why
Munis walloped on front end, $2B more outflows
Are Tesla Shares Worth a Look Post-Split?