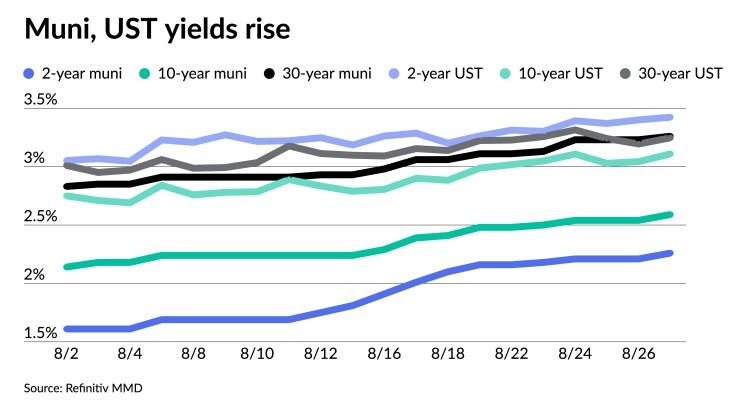 Outside a few pockets of buying, there was a dull tone to start the last week of summer in the municipal market, as triple-A benchmarks were weaker Monday. U.S. Treasuries yields rose and equities ended down.

“The market is obviously weaker today and I think it is still digesting what happened … with the Fed and Powell’s speech in Jackson Hole,” one New York trader said Monday afternoon.

Fed Chair Jerome Powell said Friday the Fed will continue to raise rates for “as long as it takes to wring inflation out of the economy,” said Nuveen strategists Anders S. Persson and John V. Miller.

“Fixed income markets experienced modest increases in rates following the statements, but investors appear to be in a wait-and-see mode,” they said.

This, he said, should bode well for munis and they should become even more attractive.

Wong said these ratios could “go even higher as the Fed continues to combat inflation by keeping a 75-basis point rate hike on the table.”

Moreover, commentary from Powell last week “offered a clear sign to investors that rates are going up and will be higher for the foreseeable future,” said Eric Kazatsky, head of municipal strategy at Bloomberg Intelligence.

“Powell said the inflation battle ‘will likely require maintaining a restrictive policy stance for some time’ and cautioned against loosening policy too soon,” he said.

“At face value, this makes the moves in munis during the previous two weeks appear somewhat prescient, though price adjustments were sorely needed,” according to Kazatsky.

The long end of the curve, he noted, “held up somewhat better, but last week’s performance of 30-year munis had the widest margin of underperformance across the curve, which could persist unless liquidity meaningfully returns.”

The New York trader said the statement on rates is mixing with seasonal factors to give the market a “weird” vibe.

“There is a limited calendar, you have a holiday next Monday, and we are certainly seeing the results of the market angst waiting for the Fed all week last week,” he said.

Overall, he noted, the municipal market was down “close to five basis points” on Monday and it was impacting the retail crowd in different ways — with some being eager to buy this week’s new issues and others carefully waiting on the sidelines for even cheaper prices ahead.

The market is currently offering “prime” levels for retail investors with 4% coupons priced at 4.30% yields — and many new issues are being structured with higher coupons to attract their attention, the trader said.

Still, while he described overall demand as high, some careful and defensive investors wait on the sidelines.

“I think there is some pent-up demand for new issues, but the bigger picture is that many customers are going to be more patient and wait for more of a calendar with cheaper prices,” the trader said.

“Right now the market has got to get cheaper before a lot more people start caring,” he added.

The ratio of municipals to Treasuries at 100% on the long end of the curve is encouraging investors, according to the trader.

“We are slowly starting to see some people coming back to the market, but I still think the market has to get a little weaker,” he added.

This last week of summer brings only $6 billion to the primary market, led by a $1 billion Chicago O’Hare International Airport offering.

“The bonds will come at cheap levels and fair prices for customers who have been patient,” he said. “I don’t foresee any problem this week getting deals done.”

This week also marks “the final week of the summer doldrums, and investors appear to be putting off major decisions until after Labor Day,” said Nuveen strategists. Munis, they noted, should remain well bid after Labor Day.

“We could see periodic tactical sell offs due to large new issues coming to market, as often happens in the fourth quarter,” they said.

However, they noted, “heavy demand from institutions should persist through yearend as portfolio rebalancing continues.”