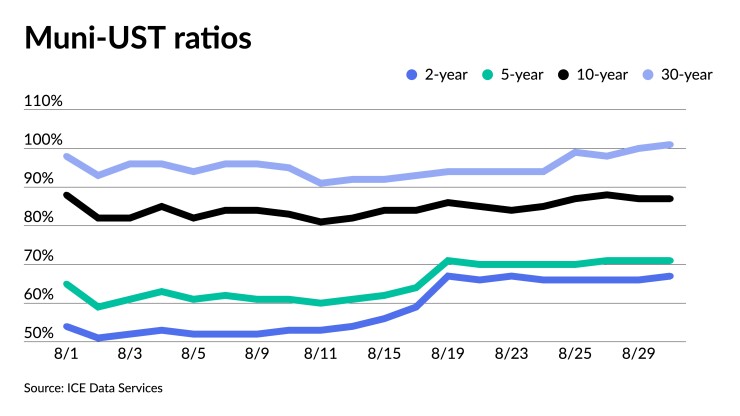 Municipals were steady to weaker in spots Tuesday, while U.S. Treasuries were mixed and equities ended down.

Money pulled from “municipal bond mutual funds last week surpassed the prior period by over five-fold and represented the third consecutive week of outflows,” he noted.

Following Powell’s comments that the Fed will continue to raise interest rates as long as necessary to combat inflation, there was a meaningful selloff in taxable rates moving into this week. Munis, he said, have begun to catch up with that.

Market volatility continues to run rampant, with MacDonald saying investors tend to be a little cautious, especially in the municipal market, where it’s predominantly a retail market.

“That said, this move higher in rates that we’ve seen started before Jackson Hole but were certainly exacerbated by the comments at Jackson Hole,” he said.

“The yields that we’re moving into are becoming a bit more attractive,” with the “front of the yield curve a bit more attractive relative to longer-term yields than we’ve seen,” MacDonald said. The flatter yield curve, he noted, may encourage some investors to look toward shorter maturities, because “you can just take less interest rate risk and capture the same amount of yield.”

The muni curve, Lipton said, “could grow flatter, particularly for short tenors, as the Fed moves to more restrictive ground, yet prospects for another inversion are low given the more compelling ratios and we could expect to see some dilution in relative value for long-dated tenors throughout the tightening cycle.”

Bid-wanted activity moves “hand-in-hand with fund outflows,” he said, and “the sharp volatility has driven trading activity to a decade high.”

And as the month comes to a close, “August will be turning in heavy disappointment as the blissful positive returns of July quickly faded into negative performance throughout this month,” according to Lipton.

“Seasonally, we’re in an interesting part of the calendar where we’re in between the higher reinvestment period during the summer and then after the Labor Day holiday, you generally see issuance kick up a little bit,” MacDonald said. “So we’re a little bit of no man’s land in terms of primary market activity.”

Looking at the forward calendar, there are some bigger deals on the horizon, and he expects investors to re-enter the market next week.

“As we get past the holiday, and into September, we should see volumes in the secondary and primary side starting to pick up,” MacDonald said.