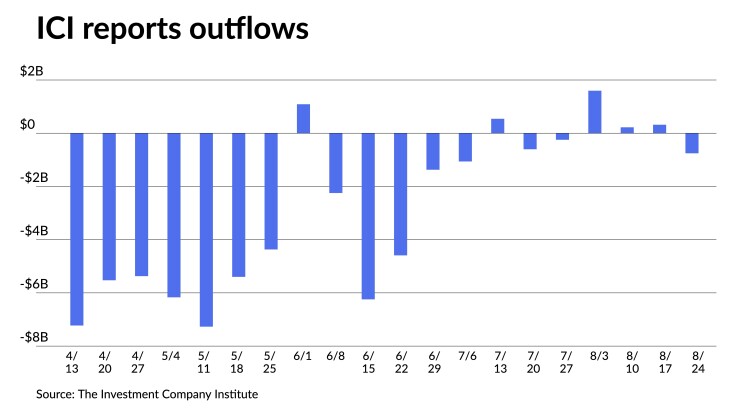 Municipals were little changed Wednesday, being cut a basis point or two in spots to close out August, while U.S. Treasuries sold off ten years and out and equities ended in the red.

The short and long ends of the curve “have undergone the most yield changes this year,” she said.

Short-term rates have risen 173 basis points since the start of the year, “impacted by a ratio correction to align with USTs reacting to rate hikes,” while intermediate muni yields are up about 150 basis points, “buffered in part by more defined flows. Long-dated munis, she said, “have yet to fully recover from heavy selling during the second quarter, leaving the 30-year spot higher by 180 basis points from the end of December.”

“Absolute yields hold a much greater value proposition on the back half of the curve, given a variety of coupon alternatives, as well,” Olsan said.

Cross-market values, she said, “have risen substantially as the effect of heavy fund reallocations has weighed on ratios.”

Short muni-UST ratios fell below 50% at the end of September and the 10-year triple-A MMD spot traded through 70% to the 10-year UST. “A steeper curve was an incentive during most of 2021, holding the 30-year AAA ratio to below 80% by the end of the year,” she said.

Olsan added “active bid list volume for most of this year has moved relative value into more historical (and even wider) ranges.”

“Ratios on the short end of the curve — which were extremely overvalued just a couple of weeks ago — continue to get cheaper and are finally at about their one-year average,” said Roberto Roffo, managing director and portfolio manager at SWBC Investment Services LLC.

In addition, he noted, 30-year ratios continue to offer the best value at approximately 100% of Treasuries, and “if the economy does eventually go into a prolonged recession, offer the best return potential,” he said.

“Ratios of 70% or greater along the entire curve should be an additional draw for new inquiry as the calendar grows during September,” Olsan said.

”A large component to rate direction this year has been the weekly outflow figure,” she said.

The Investment Company Institute reported $755 million of outflows from muni bond mutual funds in the week ending August 24 compared to $320 million of inflows the previous week.

Exchange-traded funds saw outflows of $337 million versus $200 million of outflows the week prior, per ICI data.

The average flow figure in 2021 was a positive $1.6 billion as “buyers made substantial allocations into tax-exempt strategies,” but “the rate backup that began in February and continued in force through June pushed buyers out of funds on asset losses — resulting in a weekly flow average of negative $2.6 billion,” according to Olsan.

“An irony to such heaving selling exacerbating the outflows is much higher entry points in quality-rated bonds,” she said. “New York City GO 4s due 2042 issued in August 2021 at 1.90% are now trading at 4.20%.”

New-issue volume this week in the primary is slightly below the yearly average and should clear the market due to cash on hand and the current ratios, according to Roffo.

Primary volume is being absorbed — even if it’s taking a bit longer than usual due to overall market turmoil, according to Tom Kozlik, head of municipal research and analytics at HilltopSecurities Inc.

“Issuers are hopeful that interest rate and Fed uncertainty will abate so a more predictable market — and market demand — returns,” Kozlik said.

A key driver of market activity, he said, remains the potential path the Federal Reserve is likely to take — not only for the remainder of 2022 but also in 2023.

“I think the word ‘hopeful’ sums up views from many market participants to end the ‘summer many would like to forget,'” Kozlik added.

Economy
Federal Reserve Board Chair Jerome Powell was correct that the central bank has more work to do, analysts said.

It’s not “mission accomplished” for the Fed, said Jeff Klingelhofer, co-head of investments and managing director at Thornburg Investment Management. Rates will continue to go up.

“For me, what’s perhaps most important is that inflation expectations themselves have stayed within a relatively contained band for some time and only now have begun to edge lower,” he said. Still, “hiring freezes and layoffs are ratcheting up across industries,” suggesting “a not so peaceful coexistence” between price stability and full employment.

And despite two quarters of negative GDP, Klingelhofer said, “the world today doesn’t feel like it’s in a recession. But are we moving towards one? Probably.”

While the worst of the inflation numbers are in the past, rates will fall slowly, he said. “We expect the Fed to hike rates above neutral in September. This means that the Fed will shift from a neutral monetary policy to a restrictive monetary policy, which significantly raises the likelihood of a recession.”

Thornburg sees municipal bonds as “a bright spot for investors,” Klingelhofer said. “They look undervalued today versus taxable fixed income broadly. The underlying issuers and municipals remain very well capitalized, and we believe defaults are likely to stay low well into the future.”

Looking at Powell’s speech last week, Stifel Chief Economist Lindsey Piegza said “while much of Powell’s message was focused on convincing the market that the Committee is in it for the long haul, the size of future rate hikes remains unclear. The broader message was a steady climb higher, however incoming data will dictate the pace and magnitude of the September increase as well as future rate hikes.”

August inflation data, she said, will be key to the September rate decision. If inflation slows again, “at least some Fed officials will likely be comfortable with a lesser 50 bps hike while maintaining a focus on a long-term pathway above neutral.”

John Vail, chief global strategist at Nikko Asset Management, expects a half-point increase in September “with hawkish rhetoric about future hikes” followed by similar 50-basis-point hikes “every meeting until March when we expect them to shift to 25 bps hikes.”

But the August consumer price index, if “mild,” may lessen “the market odds on aggressive Fed action, although we could still go into the September 21st meeting with the market betting on 75 basis points in tightening,” he said.

Since the Fed may ”feel some remorse for letting inflation get out of hand,” Kelly said, it “appears determined to sound and act tough on inflation.” Therefore, leaving doubt about the September hike could be “the easiest path,” so a 75-basis-point move “bolster[s] their hawkish credentials.”

Such a hike would allow a half-point raise in November and a quarter-point hike in December, he added, which “would take us to 3.75% to 4.00% by the end of this year.”

Still, Kelly noted, “it is a very close call on recession. … One more shock and we would be in recession.”

Investors should expect “the potential for volatility in the short run.”

“Unfortunately, by taking ownership of inflation, Powell has made the Fed a potential scapegoat, and allowed our dysfunctional political system an out from enacting additional policies to relieve supply side shortages (recent legislation notwithstanding),” Kalish said.

If supply-chain issues aren’t solved politically, intermediate-term inflation will be a problem, he said. “If we don’t fix the supply problems with respect to energy, food, shelter, labor, and other commodities when demand is slowing, we could quickly find ourselves right back where we started once demand returns.”

If that happens, it will mean more rate hikes. “The risk is that at some point the public sees the Fed can’t do anything about the supply side, inflation expectations go up and rates remain high,” Kalish added. “In that environment financial assets struggle.”

Gary Siegel contributed to this report.

Defying forecasts, crude oil prices have wiped out most of this year’s gains and could head lower
Bitcoin Depot says SPAC merger will continue as planned after solid revenue growth
Stocks making the biggest moves after hours: Asana, Zscaler, Marvell and more
Bahamian Attorney General Insists FTX Is the Subject of an ‘Active and Ongoing Investigation’
$15.5K retest is more likely, according to Bitcoin futures and options