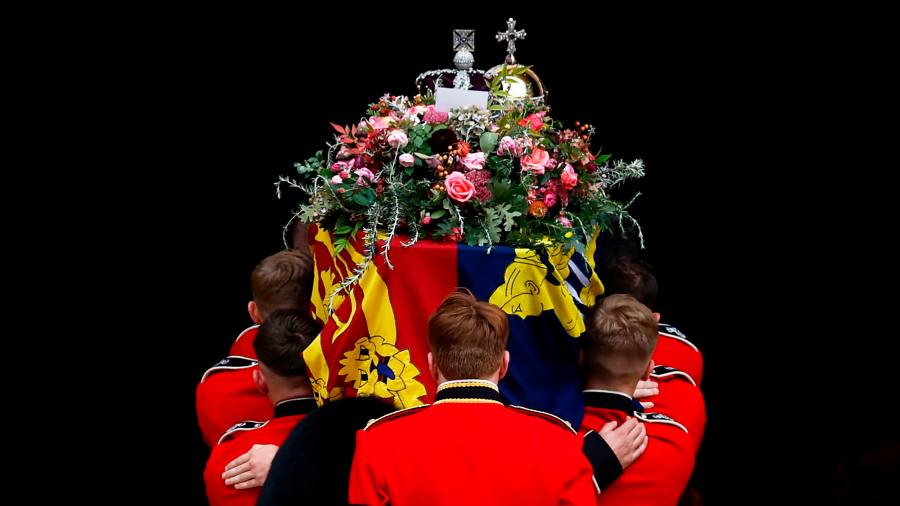 Queen Elizabeth II has completed the journey to her final resting place at Windsor after a momentous state funeral at Westminster Abbey, as world leaders joined Britons in mourning the country’s longest-serving monarch.

The Queen was laid to rest with her late husband Prince Philip at a private ceremony at the King George VI memorial chapel at Windsor at 7.30pm on Monday, drawing to a close 10 days of national mourning. The Royal Family confirmed later on Monday evening that the burial had taken place.

Crowds thronged the route as the Queen’s coffin made its way from the abbey through ceremonial London to Wellington Arch, before being taken west to Windsor Castle for a service of committal at St George’s Chapel.

The state funeral, the first in Britain since Winston Churchill’s death in 1965, was the culmination of a period of mourning when the country came together to mark a dislocating moment in its history but also one of unity and continuity.

The Queen’s coffin was on Monday morning brought on a gun carriage to the abbey from the cavernous silence of Westminster Hall, where she had lain in rest for four full days; her lying-in-state ended at 6.30am on Monday.

Hundreds of thousands of people had joined “the queue” — a line stretching for five miles along the banks of the river Thames — to pay tribute to the Queen, who reigned for 70 years. People in the line spoke of a rare sense of duty and camaraderie.

Before the funeral King Charles said he was “deeply touched” by the support he had received from around the world. At the ceremony itself, his eyes were fixed firmly on his mother’s coffin as the congregation sang the national anthem, “God Save the King”.

The public ceremonies culminated in the Queen’s coffin, still draped in the Royal Standard, being lowered below the quire of St George’s Chapel into the royal vault, from where she was moved on Monday evening to lie alongside her husband, parents and sister in the George VI Memorial Chapel.

It came after a solemn ritual at St George’s Chapel when the Queen’s Bargemaster and a Serjeant of Arms removed the instruments of state — the crown, orb and sceptre used in the coronation — from the top of the coffin.

The moment represented the completion of a circle started after the death of the late Queen’s father, George VI, when the instruments were removed from his coffin and later presented to her at her coronation in 1953.

Finally, the Lord Chamberlain, leader of the royal household, broke his wand of office, symbolising the end of his service to the late monarch, and placed it on the Queen’s coffin alongside the flag.

An extraordinary cast of world leaders attended the state funeral, whose order of service and hymns were agreed in consultation with the late Queen, to remember a woman whose reign spanned Britain’s postwar era.

While most of the visiting dignitaries arrived by bus, US president Joe Biden and his wife came in an armoured vehicle — but were held up in traffic near Marble Arch. Their delayed arrival meant they sat several rows back, behind the president of Poland and in front of the premier of the Czech Republic.

Emmanuel Macron, president of France, and Japanese emperor Naruhito — making his first trip outside his country since ascending the throne in 2019 — joined European royalty in the abbey, where the late Queen was married and crowned.

About 200 key workers and volunteers, recognised in the Queen’s Birthday Honours list in June, were also among the 2,000 invited to attend. The leaders of Russia, Afghanistan, Syria and Venezuela were among those left off the guest list.

The 10 days of carefully choreographed mourning were intended to provide ample space for grief, but also to mark the role of the British royal family as a source of continuity in national life. Westminster Abbey has been the site of royal coronations since William the Conqueror in 1066.

The Queen’s great-grandchildren, Prince George and Princess Charlotte, joined the King and other members of the royal family as the coffin processed through the abbey. The event was expected to have been watched by one of the world’s largest live broadcast audiences.

He said the late monarch had enjoyed “an abundant life” and added that “those who serve” would be remembered longer than “those who cling to power and privilege”, a remark that might have resonated with some of the politicians gathered in the abbey.

Before the ceremony this week there had been debate in the media about whether Britain’s sombre and united response to the Queen’s death, along with the spectacular ceremony, was a reminder of the country’s greatness or a distraction from its many problems.

But while this week many world leaders will assemble for the general assembly of the UN in New York, on Monday the gothic church of Westminster Abbey was briefly the focal point of global power as the world remembered the late Queen.

Some of the mourners wiped away tears during the funeral service, which began with the hymn chosen by the Queen herself: “The Day Thou Gavest, Lord, is Ended”.

Video: Queen Elizabeth II: farewell to a monarch
This article was originally published by Www.ft.com. Read the original article here.