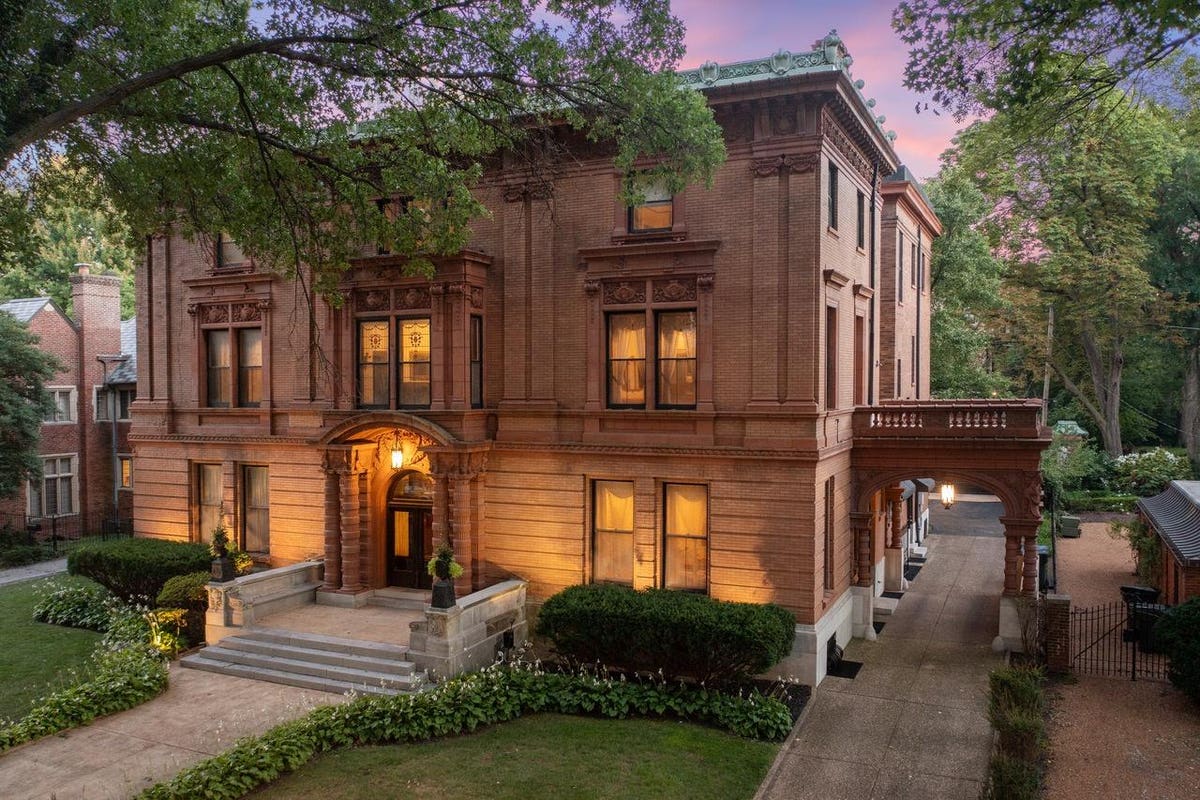 Meet me in St. Louis, Louis, meet me at the fair…the song about the 1904 World’s Fair in St. Louis, Missouri that celebrated the centennial of the Louisiana Purchase has kept it alive in our memories. Now the Nabisco Mansion, another piece of that history, is for sale.

Though it is called the Nabisco Mansion, its owner never worked for or had an interest in that company. Lewis Dozier was a prominent local baker who sold his soda-cracker business to the National Biscuit Company, which would later become Nabisco. After his retirement, he became active in philanthropy and support for the arts.

In 1896 Dozier engaged John Ludwig Wees, a local artist who studied drafting and partnered with an older architect. Although he never officially became an architect, he is credited with the design of a number of buildings in St. Louis and Paris, Texas. For Dozier, Wees designed a 12,000-square-foot mansion in the fashionable Beaux Arts style. Located in the still-desirable Westmoreland Place neighborhood, the location of the house was ideal: just across from Forest Park, the site of the upcoming fair. Dozier, who was on the fair’s steering committee, planned his home around the event. The second and third floors were devoted to 11 bedrooms to accommodate the anticipated stream of guests. The basement was to be a medieval-style banquet hall and a 2,000 square-foot ballroom for entertaining. Among the many visitors who came here was silent-film star Rudolf Valentino, who had his own key.

“This is a magnificent house in a very desirable neighborhood,” says listing broker Sam Hall of Dielmann Sotheby’s International Realty. “It is one of the rare intact neighborhoods of substantial late 19th and early 20th century houses. And it has personality! A saying in the West End, where this house is located, is ‘Characters welcome.’”

Fortunately for prospective owners who are preservationists and lovers of historic architecture, original elements of the house are largely intact. A reception foyer is centered on a carved fireplace with an onyx surround, and a carved-walnut staircase leads past a musician’s gallery on the landing. Main rooms boast 12-foot-tall ceilings and open into one another for large gatherings. Richly carved wainscots and crown moldings partner with ornate ceilings. Stained glass turns ordinary bathroom windows into gorgeous works of art that coordinate with tiles. The original sconces, made for both gas and electricity, are still on the walls.

The current owners, who bought the house in 1996, updated the mechanical systems, installed new HVAC, replaced the roof, restored the basement ballroom and created a new kitchen from three small rooms. They gently updated, but largely preserved the period bathrooms and built a new four-car garage, deck and pergola. Artistic and skilled, they painted period-appropriate wall murals and made fringed silk lampshades for parlor lighting fixtures.

The Beaux Arts style, also known as Beaux Arts Classicism, was an American favorite from about 1880 to 1930. Grandiose and florid, with an exuberance of detail and a variety of stone finishes, it was especially popular for public buildings such as courthouses, libraries, museums and railroad terminals. Private homes in the Beaux Arts style signaled wealth and the height of fashion. At the Nabisco Mansion, concrete, brick, terra cotta and some carved limestone give the illusion of a house entirely constructed of stone.