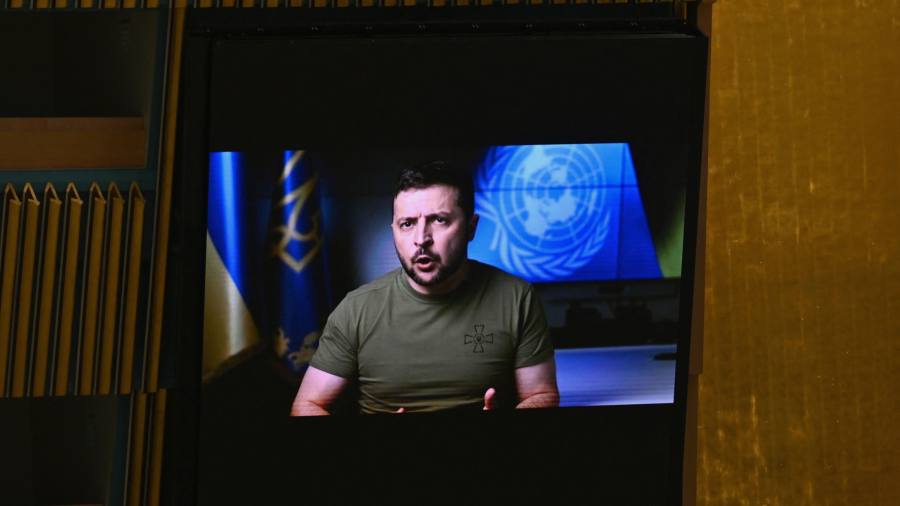 President Volodymyr Zelenskyy has launched a searing rebuke of Russia’s pledge to mobilise additional troops and hold sham referendums in southern and eastern Ukraine, saying Moscow “wants war” but “will not be able to stop the course of history”.

Zelenskyy, speaking in a speech recorded from Kyiv at the UN General Assembly, attacked Russia’s recent escalation, which he said showed President Vladimir Putin was not serious about any possible talks to bring the conflict to an end.

“Russia is afraid of real negotiations and doesn’t want to fulfil any of [its] international obligations,” Zelenskyy said. “It lies to everyone.”

Earlier on Wednesday, Putin ordered the mobilisation of army reservists to support Moscow’s ailing campaign in Ukraine, warning he would use Russia’s nuclear arsenal if its “territorial integrity” was “threatened”.

The warning, which sparked immediate alarm in Washington and around the world, came as Putin claimed that the west wanted to “weaken, divide and destroy Russia” and pressed on with plans to annex swaths of Ukrainian territory.

In his UN speech, Zelenskyy called for retribution from western countries for Russia’s actions, including revoking its UN Security Council veto.

“A crime has been committed against Ukraine, and we demand just punishment,” he said.

US president Joe Biden also hit out at Putin’s “overt nuclear threats against Europe [and] reckless disregard for the responsibilities of a non-proliferation regime”, attacking the referendum and mobilisation plans in his speech to the UN on Wednesday as “outrageous acts”.

Biden added: “This war is about extinguishing Ukraine’s right to exist as a state, plain and simple . . . That should make your blood run cold.”

Moscow announced the “partial mobilisation” of 300,000 reservists ahead of heavily stage-managed votes in four occupied regions of Ukraine on the question of joining Russia. Western officials have estimated between 150,000 and 190,000 Russian forces are currently on the ground in Ukraine.

The results of the “referendums”, starting on Friday in the Russian-controlled areas of the Donetsk, Luhansk, Kherson and Zaporizhzhia regions, are in effect a foregone conclusion, given the Kremlin is in charge of the votes.

Zelenskyy pledged Ukraine would take back its “entire territory” and asked for more weapons from the US and other western countries to help it do so.

He also urged the US and others to declare Russia a state sponsor of terror, or take other political actions to send a strong signal about isolating Russia on the world stage.

“We must finally recognise Russia as the state of sponsor of terrorists at all levels in all countries,” he said.

The Biden administration has opposed such a step, saying it could harm efforts to provide humanitarian assistance and interfere with eventual peace talks.

The US and other western powers will denounce Russia at a Thursday UN Security Council meeting on Ukraine, which Russian foreign minister Sergei Lavrov is expected to attend. Diplomats are preparing for a tense confrontation.

Also on Wednesday, Russia released two US veterans and five British citizens as part of a prisoner swap with Ukraine that was brokered by Saudi Arabia, according to US and British officials.