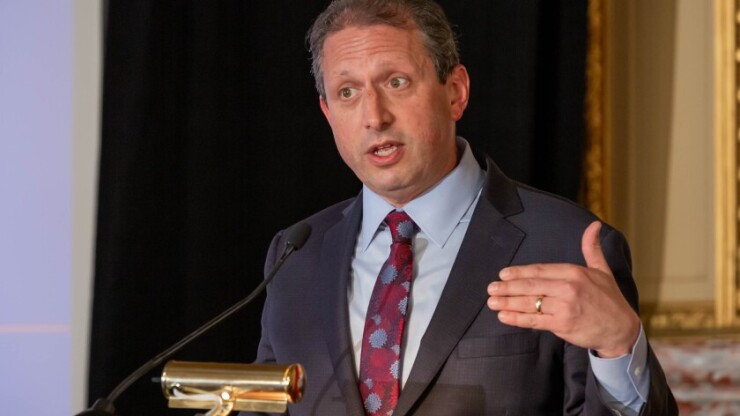 Voicing concern that BlackRock Inc.’s investment actions don’t match up with its ESG policy commitments, Lander sent a letter to the company requesting immediate action to clarify and remedy its position.

Lander’s letter means BlackRock has been chastised by public officials of all stripes on climate change and ESG in the wake of Fink’s widely heralded 2020 annual letter to CEOs, in which he declared that “climate risk is investment risk” and required a “fundamental reshaping of finance.”

BlackRock is the largest asset manager in the world and the largest for three of the five New York City pension funds, managing about $43 billion of their investments. Lander is fiduciary for the city’s pension funds.

As of January, the five funds had $265.9 billion in assets under management and were the fourth largest public pension plan in the United States.

The letter states that the climate commitments of NYCERS, BERS and TRS can only be met with the active support of their asset managers, and that includes BlackRock.

“The fundamental contradiction between BlackRock’s statements and actions is alarming. BlackRock cannot simultaneously declare that climate risk is a systemic financial risk and argue that BlackRock has no role in mitigating the risks that climate change poses to its investments by supporting decarbonization in the real economy,” Lander wrote.

In his letter, Lander asked the firm to publish an implementation plan that highlights its commitment to “achieving net zero greenhouse gas emissions across its entire portfolio, with concrete steps that detail how it intends to reach science-based targets on a specific timeframe, and clear mechanisms to regularly report on Scopes 1, 2, and 3 emissions for all assets in BlackRock’s portfolio.”

He also asked the firm to give a detailed approach to keeping fossil fuel reserves in the ground and phasing out high-emitting assets.

“As a fiduciary cognizant of the risks of inaction, BlackRock must demonstrate a plan to use its position as the world’s largest asset manager, with all the corporate governance responsibilities that go along with that position, to move its portfolio companies to get their businesses in line with a net zero economy,” he wrote.

Lander pointed out the economic consequences of inaction.

“If we do not find a way to dramatically reduce carbon emissions in alignment with the Paris Agreement, the harm will not only be measured in lives lost and people displaced; it will also be measured in trillions of dollars lost in our collective portfolios,” Lander wrote.

In July, West Virginia Treasurer Riley Moore placed five companies on a state-mandated list of restricted financial institutions which he said engage in a “boycott of energy companies.”

“While the environmental, social and governance or ESG movement might be politically popular in California or in New York, financial institutions need to understand their practices are hurting people across West Virginia,” Moore told The Bond Buyer at the time.

In January, the Board of Treasury Investments, which manages the state’s roughly $8 billion of operating funds, said it would no longer use a BlackRock investment fund as part of its banking transactions. That decision was based on reports BlackRock urged firms to embrace “net zero” investment strategies while increasing investments in Chinese companies.

Other Republican politicians have seized on opposition to ESG as a way to activate their base voters.

Florida Gov. Ron DeSantis has taken aim at ESG and what he terms the “woke corporate elite.”

In July, he announced administrative actions and legislative proposals that are aimed at “protecting residents from the environmental, social and corporate governance movement.”

DeSantis also said he will work with like-minded state officials to leverage the investment power of state pension funds through shareholder advocacy to ensure corporations are focused on maximizing shareholder value, rather than what he calls woke ideology.

The right-wing push against allowing investors to know or act on environmental and social risks also targeted S&P Global Ratings.

In a May 18 letter to S&P, Idaho officials called on the rating agency to drop its current ESG policies. Idaho is rated triple-A by Moody’s Investors Service and Fitch Ratings and AA-plus by S&P.

“We join with our sister states, especially Utah’s thorough letter in objection, in opposing S&P’s use of ESG credit indicators and object to any attempts at subjective quantification beyond the conservative and careful management of a state’s finances, repayment of debt, and a state’s ongoing creditworthiness,” said the letter, which was signed by Gov. Brad Little, Treasurer Julie Ellsworth and other elected state and Congressional officials.

This action came in the wake of Utah’s complaint in April. Utah is rated triple-A by Moody’s, S&P and Fitch.

In a May 16 reply to the Utah officials, Eden Perry, head of S&P’s U.S. public finance practice, said the agency’s opinions were intended to provide investors and market participants with information about the relative credit risk of the issuers and individual debt issues.

“Our ESG credit indicators simply provide additional transparency on those ESG credit factors that are already incorporated into our credit rating analysis,” she said. “The only thing that has changed, with the publishing of our ESG indicators, is that we are now providing both a description and a numerical representation of how relevant ESG factors influence our credit rating opinions.”

In March, Texas cracked down on financial firms the state said may be mistreating the fossil fuel industry as the state implemented law passed last year that’s aimed at protecting the state’s oil and natural gas businesses.

Even offering investors an option for fossil-fuel-free investment, such as a fund supporting environmental goals, may land a company in trouble, going by the language Texas Comptroller Glenn Hegar used when he announced an enforcement initiative.

In August, attorney generals from 19 states wrote a letter to BlackRock criticizing the firm’s policies on fossil fuels and what the letter termed a “quixotic climate agenda.”

The firm, in a response letter, said its focus on climate reflects its fiduciary efforts to produce the best investment returns.

“BlackRock’s belief that climate risk poses investment risk is backed by our publicly-available research,” says the letter signed by Dalia Blass, the firm’s head of external affairs. “This research reflects that, even with short-term shocks to the energy sector (including shocks due to the war in Ukraine), the longer-term shift towards a less carbon-intensive economy is likely to continue.”

“The Attorneys General from Arizona, Nebraska, Kentucky, and 16 other states who wrote to BlackRock on August 4, 2022, are waging a war of political distraction in the hopes of protecting the fossil fuel interests that have captured their states,” Lander said. “We recognize the absurdity of Texas Comptroller Hegar’s recent directive to boycott BlackRock, which caters to short-sighted oil and gas interests, irresponsibly jeopardizes the returns of Texas pension funds, and potentially raises costs for Texas taxpayers. But political theater cannot and must not guide fiduciary actions.”

Centrica chief warns of more energy supplier failures this winter
Defying forecasts, crude oil prices have wiped out most of this year’s gains and could head lower
CrossTower eyeing further crypto acquisitions outside of Voyager bid
Mortgage Demand Down Up To 88% From This Time Last Year
Fumiya ‘the Most Famous Japanese in the Philippines’ Becomes PROJECT XENO Ambassador