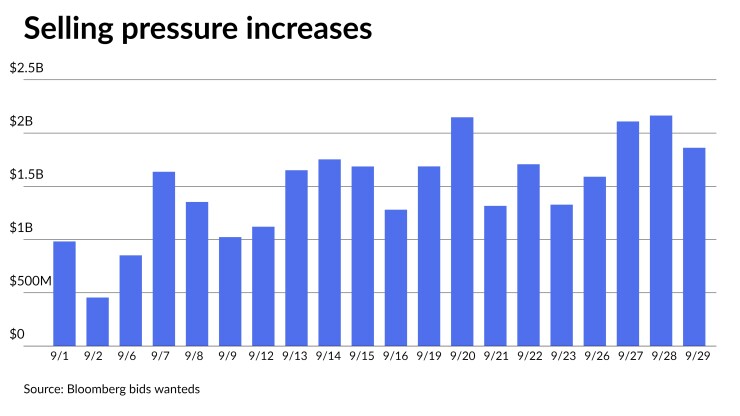 Municipals were little changed Friday to close out a month that saw triple-A yields rise more than three-quarters of a point on the front end, $7.6 billion flow out of mutual funds and issuance fall by 43%.

U.S. Treasuries were weaker and equities ended in the red after a month of central bank rate hikes, ever-increasing inflation data and resulting global market volatility.

Municipals were not immune and are poised to close out September with 3.84% losses while high-yield is at 6% in the red and taxables at negative 4.61%, per Bloomberg indices.

With the third quarter coming to an end, “munis showed no sign of reversing the recent selloff despite a large Treasury rally on Wednesday which made munis look relatively cheaper,” said BofA strategists Yingchen Li and Ian Rogow. “To be fair, the muni market itself does not appear to be the issue.”

“Outflows from mutual funds did rise, but more in line with February and March levels and significantly lower than those from April and May,” they said. “At this point, investors are more focused on tax loss swapping and some new purchases at recent higher yields.”

And “while USTs yield volatility remains extreme, tax-exempts simply cannot keep up,” according to Barclays PLC.

Barclays strategists Mikhail Foux, Clare Pickering and Mayur Patel said “muni yields have moved higher in the early part of the week, but have outperformed.”

When UST yields fell Wednesday, munis also participated in the rally but to a much smaller degree, they said.

“On a positive note, at current levels, interest from direct retail investors is finally starting; as high-quality five percent coupon tax-exempt bonds are starting to trade at a discount, retail have become more active and should provide some support,” they said.

“Muni ratios are becoming attractive across the curve, but especially for long-dated municipals,” Foux, Pickering and Patel said.

Long-dated ratios in the 110%-115% range historically have attracted crossover interest, “similar to May 2022, and now are not that far from that level,” they noted.

“The muni yield curve had become very steep until this week, when it has dramatically bear-flattened, with the 5s30s slope decreasing nearly 25bp in a very short time after the short end and the belly of the curve became pressured,” they said. They think the long end might continue to outperform but to a lesser degree.

Calendar subdued to start the fourth quarter
Investors will be greeted Monday with a new-issue calendar estimated at $3.816 billion.

There are $3.308 billion of negotiated deals on tap and $508.1 million on the competitive calendar.

The negotiated calendar is led by the $1.35 billion of GOs from New York City in two deals.

New York City will dip its toes into the social bond municipal market for the first time when it offers a $400 million taxable general obligation deal.

This is the city’s first sale of social bonds.

Proceeds from the sale of the social bonds will go to supporting more than 3,000 units of affordable housing under the mayor’s “Housing Our Neighbors: A Blueprint for Housing and Homelessness“ plan.

The city also will price $950 million of tax-exempt fixed-rate bonds after a one-day retail order period on Monday.

Other notable deals include $500 million of revenue bonds from Austin, Texas, in two tranches and $308 million of unlimited tax schoolhouse bonds from the Spring Branch Independent School District, Texas.