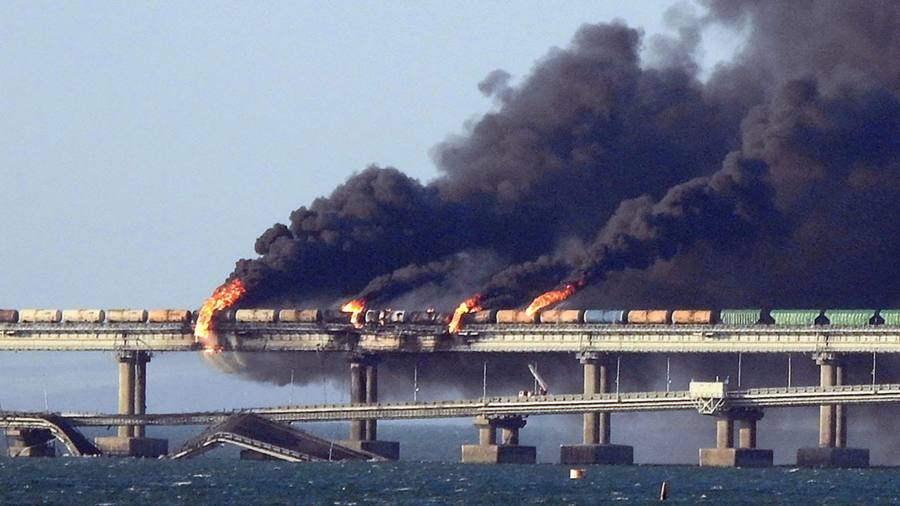 An explosion tore through Russia’s bridge across the Kerch Strait to Crimea early on Saturday, severely damaging it in a major blow to Vladimir Putin more than seven months into his invasion of Ukraine.

Russia’s anti-terrorist committee said a truck exploded on the bridge’s roadside in the early hours of Saturday morning and caused seven fuel tanks on the railway bridge which runs alongside it to ignite.

Putin, Russia’s president, ordered senior officials and security agencies to investigate the explosion, which sent huge clouds of smoke into the sky as a blaze raged, caused two road spans of the bridge to collapse and scorched part of the railway.

The apparent attack is another humiliation for Russia as its invasion of Ukraine, originally designed to capture Kyiv in a matter of days, continues to struggle.

The bridge is a major conduit to supply Russia’s war effort in south-eastern Ukraine, where its troops have made substantial retreats in the last week from territory Putin claimed as Russian after annexing four Ukrainian regions.

Putin had attempted to raise the stakes following a series of battlefield setbacks by claiming the territories as Russian soil — allowing him to reframe the invasion as a defensive war, justifying the mobilisation of the army’s reserves, and raising the threat Russia could use nuclear weapons if Ukraine tried to take the regions back.

Instead, the quagmire has only deepened. Many Russian people have fled to Kazakhstan to avoid military service, while Ukraine continues to make advances in the east and south, prompting rare public criticism of Moscow’s army from some Russian officials and on state television.

The 12-mile bridge was devised when Russia annexed Crimea from Ukraine in 2014 and completed in 2018. It is an engineering feat — the Wehrmacht and Red Army both tried and failed to cross the waters between the peninsula and the Russian mainland during the second world war — and has become a symbol of Russian prestige.

Putin opened the bridge in 2018 when he drove a truck across it alongside his childhood judo sparring partner Arkady Rotenberg, the billionaire he placed in charge of building it.

It is a key artery for shipping as it spans routes connecting export ports on the Azov Sea to the Black Sea.

Ukrainian officials did not claim responsibility for the attack but hailed the bridge’s collapse.

“Crimea, the bridge, the beginning,” tweeted Mykhailo Podolyak, a senior adviser to Ukrainian president Volodymyr Zelenskyy, as he posted a picture of the bridge collapsing into the sea.

“Everything illegal must be destroyed, everything stolen must be returned to Ukraine, everything occupied by Russia must be expelled.”

Andriy Yermak, Zelenskyy’s chief of staff, tweeted two pictures of a bridge, the first showing it under stars in the evening and the second showing it surrounded by clouds.

Ukraine’s defence ministry, military intelligence and a spokesperson for Zelenskyy all declined to comment.

Western diplomats in Kyiv seeking information on the explosion were told by a Ukrainian official that the country’s military had evidence that the fuel tanks on the railway bridge were headed to a military depot. The official stopped short of taking credit for the attack, one diplomat said, but the claim implies that the Ukrainian government considered the fuel tanks were a military, and thus legitimate, target.

In response to the explosion, a senior EU official noted that the bridge’s construction “took place without Ukraine’s consent and constituted another violation of Ukraine’s sovereignty and territorial integrity” and that Crimea “has been illegally annexed by Russia since 2014”.

Numerous key infrastructure and military targets in western Russia and in Crimea have been hit by explosions since the start of Moscow’s full-scale invasion of Ukraine in February.

Kyiv has stopped short of formally claiming responsibility for the attacks but mocked Russia’s attempts to reassure the population by blaming the explosions on mundane causes such as gas leaks.

On Saturday, pictures shared on social media showed flames wrapping around a section of the bridge and smoke rising over the water.

Dashboard camera footage appeared to catch the moment of the explosion, showing that some passenger vehicles were travelling on the road when it took place. The FT could not verify the footage.

Other footage appeared to show structural damage and parts of the motorway submerged in the strait.

Russian officials said they had put out the fire and closed the bridge to rail and road traffic.

Russian investigators said that three people were killed in the apparent attack. They claimed the people were in a car driving past the truck when it exploded. The truck belonged to a resident of the nearby Russian province of Krasnodar, the investigators said, adding that they had begun a search of the person’s home.

Dmitry Peskov, Putin’s spokesman, said it was too early to tell how long it would take Russia to rebuild the bridge.

Additional reporting by Mehul Srivastava in Kyiv, Henry Foy in Brussels and John Paul Rathbone and Christopher Miller in London