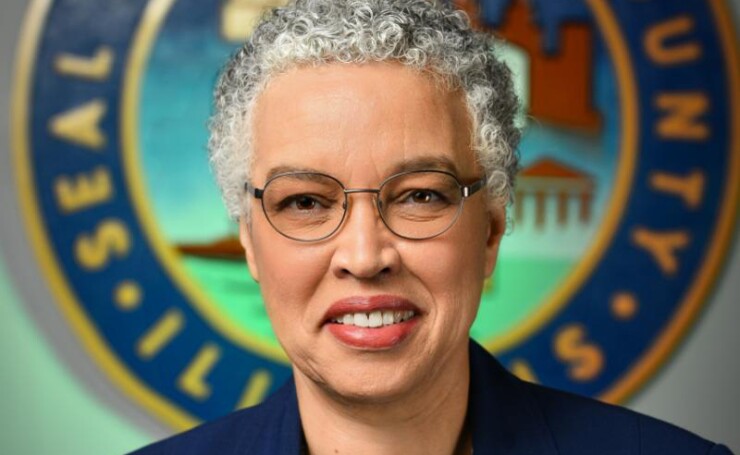 The proposed spending plan, up 7.8% from fiscal 2022, includes a $1.97 billion general fund, a $237 million fund that holds transportation-related taxes, and a $3.99 billion health fund. Heading into budget season, Board President Toni Preckwinkle’s administration forecast just an $18.2 million gap to close, the lowest since she took office in 2010.

The proposed general fund benefits from a projected $124 million increase in sales tax collections to $1.1 billion which accounts for 55% of the general fund.

“In the face of multiple economic risks, Cook County has had its bond rating upgraded, continued making supplemental pension payments to put the county’s pension fund on a path toward sustainability and built up a manageable reserve fund,” Preckwinkle said. “Despite a pandemic, global economic turmoil and rising inflation, the fiscal condition of Cook County is strong.”

Preckwinkle, a Democrat, is seeking a fourth term to lead the county which includes Chicago and neighboring suburbs against Republican nominee Robert Fioretti and Libertarian Thea Tsatsos.

With a fund balance that exceeds the county’s target of two months’ coverage of general and transportation fund expenses as well as a ceiling of three months, the budget would draw down some of the balance in 2023. The county opened fiscal 2022 December 1 with a balance of $703.6 million and expects a $233.4 million increase before closing the books.

The county would tap $231.8 million, directing it to other accounts and use another $30 million to establish the new infrastructure fund, send $44.3 million to a self-insurance fund and $29.3 million to an equity fund to finance various social programs.

“As a result, by the end of FY2023, the fund balance is expected to total $571.7 million,” which is slightly above the county’s 25% ceiling based on its fund policy, budget documents say. “This amount accounts for approximately 26% of the county’s FY2023 annual budgeted expenditures from the general fund and the transportation fund.”

Longer term, the fund balance is projected to keep growing modestly hitting $603.9 million by fiscal 2027 under a baseline fiscal scenario. Under a more positive fiscal picture, the balance could hit more than $900 million but under a “worst case” it falls to $120 million.

The county adheres to a policy that allows it to draw the amount over the “ceiling” but only for non-recurring expenses, to pay down bonds, outstanding pensions or retiree healthcare liabilities, or for a transfer to a committed or assigned fund balance in the following fiscal year.

Flush reserves helped draw positive rating actions last year and over the summer so it’s unclear how the draw might impact future analysis. The country stresses that the levels remain healthy and above the “ceiling.”

The county would stay on track in fiscal 2023 with its supplemental pension contributions.

The 2023 excess contribution of $291.7 million supplements a $200 million required payment under the current statutory formula, bringing to $2.34 billion the extra funding sent to the pension fund over the last six years since the sales tax was raised to save the fund from insolvency. The county also plans a $20 million payment into a special pension stabilization fund.

The pension fund’s estimated funded ratio recognizing supplemental funding increased to 70.7% and puts it on a track to 100% ratio in 2043. Without the extra allocations, the fund would fall under 60% funded and exhaust assets in the coming decades.

The county sends the extra cash to the fund under an intergovernmental agreement, so it’s not recognized for actuarial purposes on an ongoing basis. Stakeholders remain in negotiations over how best to write the new formula into state statutes.

The budget has grown by about 10.6% annually since 2014 but that’s primarily due to increased pension contributions and the expansion of the county’s healthcare insurance program CountyCare.

The budget provides ongoing funding for various programs helped with about $250 million of American Rescue Plan Act relief that will be tapped over the next few years to bolster health care programs, administer a guaranteed income pilot, provide medical debt relief, homeless program, and neighborhood and small business grants.

About $1 billion in federal COVID-19 pandemic relief allowed the county to help make up past revenue losses as well as spend on various programs. Over the next three to five years, the county will spend $700 million on community programs.

The finance team said it’s watching closely how revenues perform with some like hotel taxes still in COVID-19 pandemic recovery mode and some economically sensitive to a recession like sales taxes.

County budget chief Annette Guzman said the spending plan relies on conservative revenue estimates “because we have concerns about recessionary impacts” and noted the availability of fund balances.

The gap fell from a $121.4 million shortfall projected a year ago this time ahead of the eventual adoption of a fiscal 2022 $8.1 billion budget. The county was facing a $410 million gap two years ago as the pandemic took a toll on revenues.

Reversing a trend of negative actions, Fitch Ratings lifted the county’s GO rating to AA-minus from A-plus last November, assigning a stable outlook, and S&P Global Ratings returned the county’s outlook to stable from negative and affirmed the A-plus rating.

Fitch and S&P affirmed the ratings ahead of a summer GO sale. Moody’s Investors Service affirmed its A2 rating and revised its outlook to positive from stable.

“The rating is likely to move upward if the county can sustain strong financial reserves and balanced operations despite potentially deteriorating underlying economic conditions and myriad challenges and uncertainties associated with operation of a large safety net health system,” Moody’s said.

Second installment tax bills are typically due over the summer but won’t go out until later this year. Preckwinkle has blamed the delays on a combination of the COVID-19 pandemic and a major technological upgrade still being completed — staying out of a dispute between two other elected bodies.

The county launched over the summer a $300 million borrowing program for eligible suburban local governments to participate in that provides no-interest loans to manage a months-long delay in second installment property tax collections.

The bridge loan program announced in July will spare suburban taxing bodies from having to issue tax anticipation notes to bridge the gap, with eligibility tied to a local government’s need and their costs to access the capital markets. As many as 500 taxing bodies might qualify. The county is still finalizing final participation numbers. PNC Bank is providing a line of credit to fund the bridge loan program.