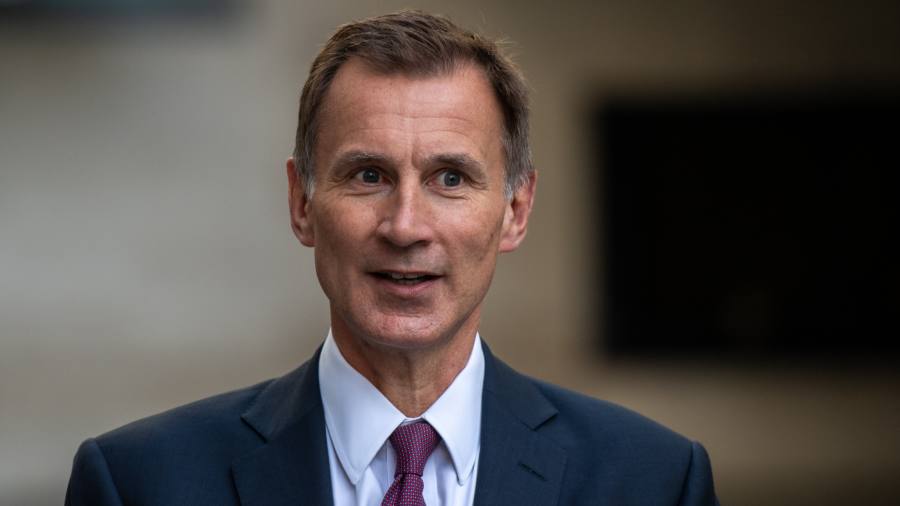 Jeremy Hunt, the new UK chancellor, admitted taxes would have to rise and spending would have to be cut after prime minister Liz Truss failed to reassure markets with a U-turn on cutting corporation tax.

In his first interviews since replacing Kwasi Kwarteng, who was sacked by the prime minister on Friday, Hunt buried the last parts of Truss’s low-tax economic strategy and admitted there were some “very difficult decisions ahead”.

“Taxes are not going to come down by as much as people hoped, and some taxes will have to go up,” he told the BBC’s Today programme, adding: “If we’re going to fund the NHS and our public services and keep taxes down, we have to solve the growth paradox.”

The medium-term fiscal plan which the Treasury is due to produce on October 31 will now “pretty much” be a “full budget”, he told ITV.

Hours after Hunt spoke, Andrew Bailey, governor of the Bank of England, welcomed the government’s U-turn on raising the corporation tax rate, saying he valued the “sustainability of fiscal policy”.

“I have spoken to Jeremy Hunt yesterday and there was a clear meeting of minds on the importance of stability and fiscal sustainability,” Bailey said, adding that the U-turn on corporation tax was “an important measure” in that regard.

But he added that in his view the government’s energy price guarantee “will add to demand and add to inflationary pressures” in the UK.

Highlighting the need for Hunt to demonstrate sustainable finances, he said that having the government’s fiscal statement at the end of the month was the “correct sequence” before the BoE’s next interest rate decision, due on November 3.

But Bailey warned that the central bank was inclined to impose a large increase in interest rates in response to Truss and Hunt’s fiscal policies, even if they show a greater desire to bring debt down as a share of national income.

“We will not hesitate to raise interest rates to meet the inflation target. And, as things stand today, my best guess is that inflationary pressures will require a stronger response than we perhaps thought in August,” Bailey said.

Bailey refused to predict how the measures taken were likely to be interpreted by financial markets when they reopen on Monday.

Gilt markets were hit by a fresh sell-off on Friday afternoon after an abrupt eight-minute Downing Street press conference by Truss. Whitehall is braced for further turbulence in the coming week.

One senior official said: “What Liz did is clearly not enough, there’s going to be more U-turns and more pain ahead. I don’t think they’ve clocked yet that it could be about to get even worse.”

Although Truss had instructed Hunt that there would be no further U-turns on last month’s disastrous “mini” Budget, the new chancellor told the BBC on Saturday that he would be “completely honest with the country” about the crisis and that spending cuts would be required.

“I’m going to be asking all government departments to find additional efficiency savings,” he said. “[There will be] difficult decisions on spending, which is not going to rise as much as people hope.”

Hunt declined to say whether households’ benefits would be uprated in line with inflation. He said: “I am very sensitive to the needs of people right at the bottom of the income scale and I’m not going to make that commitment within hours of taking on this job.”

The chancellor told Sky News the government “won’t have the speed of tax cuts” it hoped for, but insisted there would be no return to major levels of austerity. “I don’t think we’re talking about austerity in the way we had it in 2010. But we’re going to have to take tough decisions on both spending and tax,” he said.

One cabinet minister questioned whether Hunt’s pledge was credible. “I don’t see how any major package of cuts gets through the Commons. If MPs won’t vote for it, it’s not credible and the markets will reject it,” he said.

Hunt criticised Kwarteng for two major “mistakes”, saying it was “wrong” to cut the top rate of 45p income tax and to “fly blind” without full costings from the Office for Budget Responsibility. The chancellor said both measures were “being put right”.

Any more government U-turns are likely to further imperil the prime minister’s position. Some senior MPs predicted she would struggle to survive the current crisis.

One veteran MP said: “There is no point to her project or premiership now, it feels like it is already over.”

Another senior Tory MP predicted that letters of no confidence in Truss would reach “a critical point in the very near future” that would force Sir Graham Brady, chair of the 1922 committee of backbench MPs, to act.

The Times reported that Kwarteng believes Truss has just “a few weeks” left as prime minister.