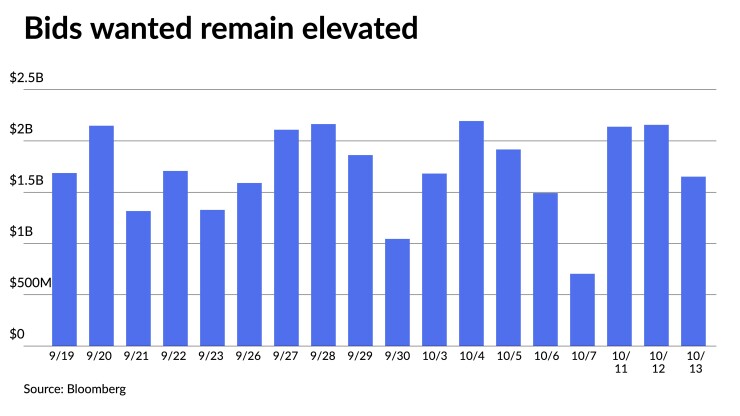 U.S. Treasury yields rose, pushing them to multiyear highs. The two-year closed above 4.5% and the 10-year eclipsed 4%. Equities ended down on continued concerns over inflation.

“Despite a pick-up in volatility in the rates market, municipals have been performing relatively well in October,” according to Barclays PLC.

Helping is the slowdown in issuance, despite October usually being one of the heaviest supply months of the year. However, they believe issuance will “pick up near term but this month will likely turn out to be relatively light by historic standards.”

“Retail investors, on the other hand, appear to appreciate current higher tax-exempt yield levels and view munis as an area with lower volatility relative to taxable bond or the equity markets,” they said.

If issuance increases, Barclays strategists said it will “put some pressure on the secondary market,” which “could present a good entry point in the next several weeks.

“In our view, investors are better off just nibbling, rather than being aggressive right now,” they said.

Since early August, muni-UST ratios have been steady while “the ’non-recession’ trade lifted the 10-year Treasury yield by 150bps,” BofA strategists said.

“If 10+ year Treasury yields climb into higher ranges, we think the 10-year muni AAA yield most likely would only revisit its September peak,” BofA strategists said.

Some investors appear to be “taking advantage of the relative stability in the muni market and have been trying to raise liquidity, keeping the number of bid-wanteds still elevated at the moment,” Barclays strategists said.

As a result, they noted said “dealers have been slowly getting longer but the market still seems relatively stable.”

“Even on Thursday as a result of the CPI’s negative surprise, muni yields widened a bit, but still outperformed Treasuries by a wide range, pushing ratios down even more,” Barclays strategists said.

BofA strategists said, “economic data continues to be supportive of a hawkish Fed stance as the ’non-recession trade’ extends to October.”

While “employment reports are strong, and inflation shows little signs of abating,” they said there’s still the question of “how much longer can this ’non-recession’ theme extend is likely to become a market focus over the next several weeks.”

Barclays strategists said that Thursday’s CPI “presented an unwelcome surprise to investors,” and in response, USTs “sold off by 10-15bp with the curve bear-flattening.”

“Fed Funds futures now price in with 60%+ probability another 75bps rate hike at December’s meeting if the Fed only hikes 75bps at the November meeting,” according to BofA strategists.

Barclays strategists added there’s even a “small probability of a 100bp rate hike,” though that seems unlikely to them.

They remain “optimistic on municipal performance in Q4, but would prefer to add at more attractive entry points versus Treasuries.”

Calendar rebounds eightfold
Investors will be greeted Monday with a new-issue calendar estimated at $8.527 billion.

There are $7.413 billion of negotiated deals on tap and 1.113 billion on the competitive calendar.

Rhode Island leads the competitive calendar with $223 million of GOs in two deals.