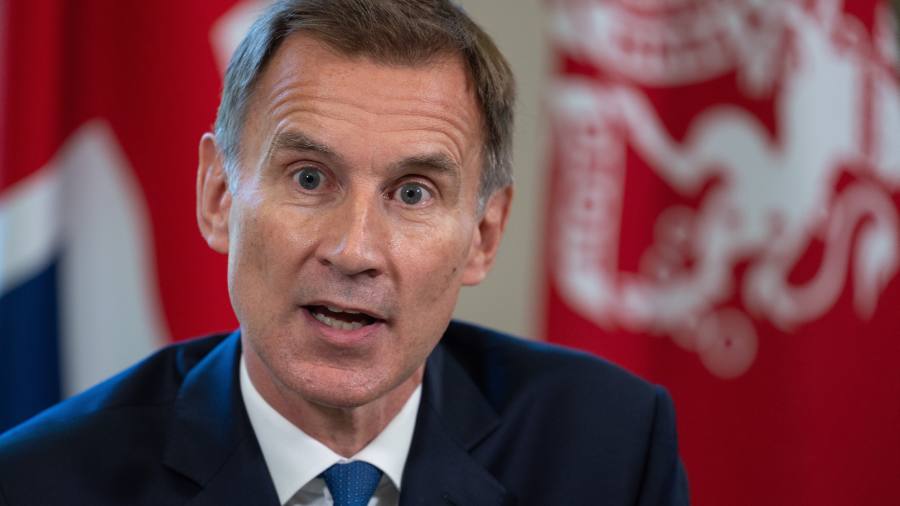 Jeremy Hunt, the new UK chancellor, on Monday ripped up Liz Truss’s economic policy, in a move that reassured markets but left the prime minister’s future hanging by a thread.

Hunt scrapped two-thirds of the controversial £45bn of unfunded tax cuts announced by his predecessor Kwasi Kwarteng and warned of “eye-wateringly difficult” decisions still to come to balance the books.

While Hunt was rewriting Truss’s economic strategy, the prime minister held crisis talks during the day with cabinet ministers, Tory MPs and Sir Graham Brady, chair of the backbench 1922 committee. Several Tory MPs said Brady had already received a “significant” number of letters of no confidence in the prime minister.

One former cabinet minister said: “We know how this is going to end. The advice going into the PM is not to extend the agony. This is far worse than anything Boris Johnson did. This affects people’s jobs, livelihoods, dreams.”

The prime minister sat pale and motionless during a brief appearance in the Commons, where she listened to Hunt read the last rites over her economic plan.

In a sign that power has flowed away from the prime minister, Hunt told MPs he would consider binning even more of Truss’s policies, as he told the House of Commons that “economic stability” was now the priority.

He refused to rule out the possibility of ending the “triple lock”, which ensures inflation-linked pension rises. “I’ve said nothing is off the table,” he said. He added he was not opposed to windfall taxes “in principle”, although the government already has some levies on the energy sector.

Across Whitehall ministers and officials began trying to find savings from stretched budgets, even though many public services including hospitals, schools and courts are already under massive pressure.

Hunt’s reversal of most of Kwarteng’s mini-Budget on September 23 saved £32bn, but the new chancellor will have to make additional big savings and raise taxes further to fill a fiscal hole estimated at about £70bn.

The new chancellor scrapped a £6bn cut in the basic rate of income tax, along with changes to dividend taxes, taxes for freelances, a VAT tax break for foreign shoppers and a freeze on alcohol duty, saving about £5bn. Truss had already axed tax cuts for big business and the wealthy, saving £21bn.

In another dramatic move, Hunt announced that an “energy price guarantee” to households and business would last only until April, rather than two years, as previously planned, and thereafter would be more targeted.

The scheme, which is set to cost £60bn for the first six months, would be redrawn so that it would cost “significantly less”, while retaining help for those most in need. A Treasury review will be launched into the scheme.

Rachel Reeves, shadow chancellor, said the Conservative government was taking Britain back to an era of austerity: “They have set fire to everything.”

The 30-year gilt yield tumbled 0.41 percentage points to 4.37 per cent, reflecting higher prices for government bonds, as markets reflected on the fact that Hunt seemed serious about taking the measures needed to get debt under control.

Shorter-dated gilt yields also fell sharply, while the pound gained 1.3 per cent against the dollar to trade at $1.1314. Hunt insisted: “The UK will always pay its way.”

The chancellor will set out more tax rises and spending cuts in a medium-term fiscal plan on October 31, accompanied by Office for Budget Responsibility forecasts. Truss’s future is far less certain.

Her allies admit that the next 48 hours will be critical in determining if she could ride out the storm, but a new poll by Redfield & Wilton cast further gloom over her premiership.

The survey put Labour on 56 points and the Conservatives on 20; the 36-point lead was the biggest recorded by any pollster for any party since 1997. Nadine Dorries, former cabinet minister, said the Tories could be heading for “extinction”.

The Bank of England confirmed on Monday it was ending bond-buying operations and replacing it with a lending facility, noting the central bank was not there “to provide a permanent backstop” to the pensions industry, which has been hit by the volatility in gilts.

Hunt’s reversals will not completely fill the hole in the public finances, partly because the Treasury is hoping to lower interest rates in the markets and thereby reduce the gap still to be bridged.