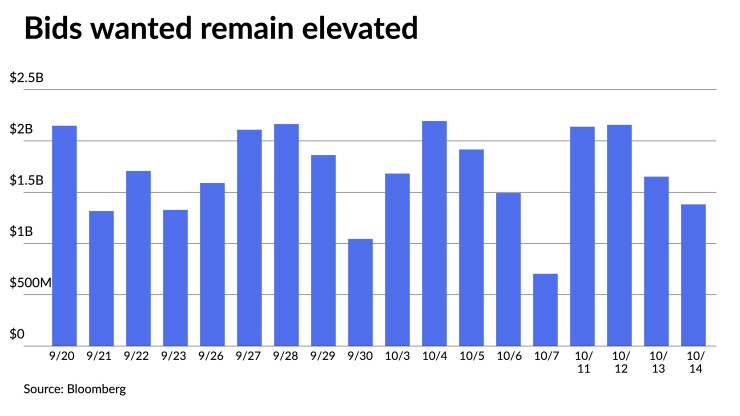 Munis were slightly better to kick off the week, while U.S. Treasuries were firmer 10 years and in and equities rallied.

Municipal triple-A yields fell one to three basis points Monday while UST saw the 10- and 30-year end the session just above 4%.

Last week’s calendar was very light due to the holiday-shortened week and the release of the consumer price index report on Thursday, noted Jason Wong, vice president of municipals at AmeriVet Securities. This week, volume rebounds eightfold with a new-issue calendar of $8.5 billion, including several billion-dollar deals.

While there was only four days of trading last week, he said there was about $43 billion in secondary trading as “volatility continues to hit the markets as accounts are still worried about high inflation, a possible recession and the potential of more rate hikes.”

Wong said clients’ bids wanteds continue to be at “elevated levels with about $7.33 billion in total par amounts,” per Bloomberg data.

“Muni yields for the week rose slightly with the 10-year notes rising by just 1.6 basis points to 3.16% as munis sold off due to the higher-than-expected inflation numbers on Thursday,” he said. But despite munis finishing the week weaker, they outperformed USTs as “Treasury yields increased dramatically because of the CPI number.”

With the release of the CPI figures, inflation continues to be at elevated levels, resulting in triple-A yield curves being cut, with larger losses on the short end, while USTs saw yields rise nine 18 basis points five years and in, he said.

“Although we did not see the sharp increases in yields as we saw in Treasuries, keep in mind that munis usually lag Treasuries as we are seeing the muni curve continue to flatten even more,” Wong said. “Since the beginning of the third quarter, we have seen the short end yield rise by about 150 basis points, while the 10-year portion only increasing by roughly 70 basis points, and the long by just 65 basis points.”

Fed rate increases should continue, at least for now, Nuveen said. The 10-year UST reached 4% last week (and held there on Monday), which remains inverted relative to short-term yields. This suggests, they said, that investors believe the Fed will keep raising short-term rates.

“Many expect the Fed will be successful by the second quarter of 2023 when long-term rates should rally,” they said.

But the muni market continues to be an area of opportunity, said Cooper Howard, fixed income strategist focused on munis at Charles Schwab.

“We think the bulk of the move up in yields is behind us so we favor extending duration and focusing on higher-rated issuers,” Howard noted. “Relative yields have declined recently but and are more attractive the further out the yield curve you move.”

While yields are attractive, he said that “investors continue to pull money out of muni mutual funds and ETFs at a record pace,” putting “upward pressure on credit spreads even though credit risks aren’t on the rise.”

“While mutual funds have seen redemptions, individual investors have supported the market with heavy interest, as they can buy bonds with a tax-exempt 4% yield,” Nuveen strategists said. “Institutional investors also continue to rework their portfolios.”

They believe there will be continued volatility through the rest of the year but expect a better year in 2023.

Treasuries were firmer 10 years and in.