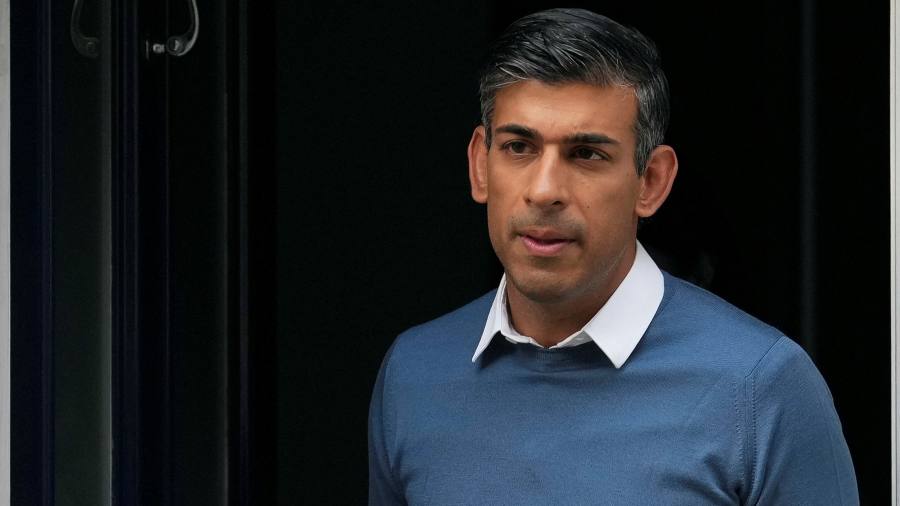 Former UK chancellor Rishi Sunak is poised to formally enter the race to become Britain’s next prime minister after securing public backing from the 100 Tory MPs needed to enter the ballot.

Sunak had 111 declared backers by Saturday evening; Conservative MPs had yet to decide whether to put former prime minister Boris Johnson on the ballot paper too.

Johnson’s allies claimed that the ex-premier, who resigned in July following a series of scandals and more than 60 ministerial resignations, had secured more than 100 MP supporters. Sunak supporters asked to see the proof.

By 7pm on Saturday Johnson, who has only just returned to Britain from a holiday in the Dominican Republic, had around 50 publicly declared backers, according to data collected by the FT.

His allies said that the former prime minister was seeking a meeting with Sunak on the unlikely premise that the frontrunner in the contest might capitulate.

“Rishi knows that if he goes head-to-head with Boris in a vote among the members he’ll lose,” said one ally, arguing that Johnson could strike a deal with Sunak and give him a prominent role in his government.

But many in the party believe he would be a hugely divisive choice and analysts have warned that investors would react badly to the prospect of his return, saying it would bring the risk of further economic and political upheaval.

William Hague, former Conservative leader, said Johnson would lead the party into a “death spiral”. A number of Tory MPs have warned that they could quit if he became prime minister, imperilling the Tories’ majority.

Johnson’s allies said that the former prime minister “could” enter the contest if he chose to. His friends have said they are certain he would run if he was sure of securing the necessary number of nominations.

Penny Mordaunt, the Leader of the House of Commons, hopes to emerge as a compromise candidate but so far has only 23 backers. If Johnson pulls out of the contest she would aim to pick up his supporters.

Sunak is seen by some Conservatives as a divisive figure because of his role in toppling Johnson: his resignation as chancellor in July brought the leadership crisis to a head. Some on the Tory right also dislike his record of raising taxes.

The final two selected by MPs will be presented to the party members, who will make the final decision by Friday.

If both Sunak and Johnson make it on to the shortlist when nominations close on Monday, many Tory MPs believe that Johnson would win but the party would be badly fractured.

The former prime minister is still popular with party members and could claim that he has a mandate, having won an 80-seat majority at the 2019 election.

But the prospect of his return risks further market turmoil, not least because Johnson is known to be far less enthusiastic about fiscal discipline than Sunak, his former chancellor.

In his resignation letter to Johnson in July, Sunak said: “Our people know that if something is too good to be true, it is not true.”

Johnson also faces a parliamentary inquiry into whether he lied to MPs over the “partygate affair”. If found guilty, he could be suspended from parliament and could face a by-election.

Robert Jenrick, health minister, said: “We should not forget that 43 days ago the party removed Boris Johnson as serious issues engulfed his premiership . . . Some of these remain unresolved.”

Kemi Badenoch, international trade secretary and a contender in this summer’s leadership contest, backed Sunak. She wrote in The Times that the country faced problems “so acute that only straight talking about what is required will do”.