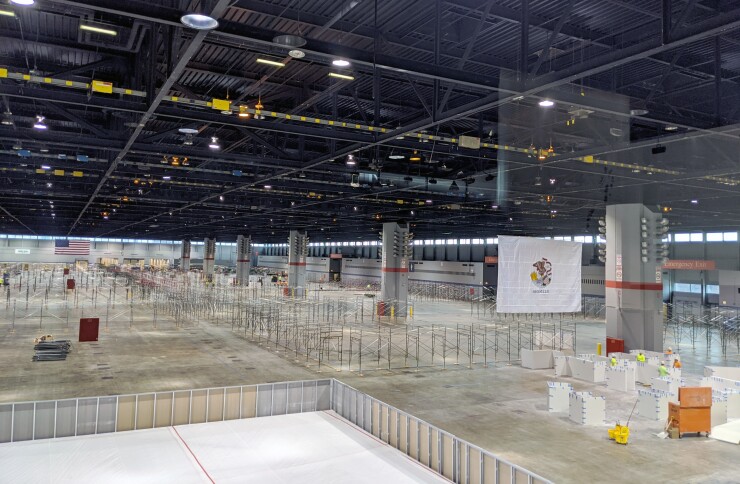 The public agency that manages Chicago’s convention center campus will return to the market next month with a debt restructuring to give it breathing room to meet fiscal 2023 debt service as operations and tax collections remain in COVID-19 recovery mode.

The Metropolitan Pier and Exposition Authority board signed off Tuesday on a borrowing of up to $26 million of expansion project refunding bonds with a final maturity no later than Jan. 16, 2030, although the current plan anticipates a Dec. 15, 2027, maturity.

While the agency heads into a much rockier market and higher interest rate environment than it navigated with its $811 million 2021 sale, it will take with it two higher ratings which followed a round of spring upgrades for the Illinois state government, two of which raised MPEA’s linked rating.

The authority generates operating funds from hosting shows, conventions and other events at its McCormick Place Convention Center campus, arena, and hotels. It repays $4.4 billion of outstanding project expansion debt with taxes on food and beverages, car rental, hotel taxes, and airport departures.

“MPEA is planning to refinance the fiscal year 2023 debt service to bring the debt service in line with expected authority tax collections. This supports the authority’s goals to keep a full $30M reserve fund balance as well as to maintain flexibility as the authority’s tax recovery continues post-COVID,” the agency said in a statement.

Those taxes took a big hit during the COVID-19 pandemic, straining an already steep debt service schedule that was already expected to force the authority to roll over old debt using the so-called “scoop-and-toss” maneuver.

The authority owes $213.2 million in debt service payments for fiscal 2023 that runs through June 30, according to the schedule in the agency’s last final offering statement. That rises to $269.5 million in fiscal 2024.

Collections for the first three months of fiscal 2023 reached $45.8 million. Though not on track to fully cover debt service, revenues are up dramatically from the $24.2 million generated for the same period a year earlier, according to the financial results presented to the board.

The taxes on food and beverages, auto rentals, hotel rooms, and airport tax departures all were up, with the hotel tax showing the strongest rebound of 177% at $17.7 million.

Events are also on the upswing. The McCormick Place Convention Center hosted 107 events with 1.28 million attendees from July 2021, when it reopened after a state-ordered April 2020 shutdown to help curb the spread of COVID-19, through August 2022. Across the campus, a total of 228 events were staged with 1.65 million visitors.

From September through December, MPEA expects to host 31 events with 572,000 attendees and 112 events through fiscal 2023 with 2.28 million visitors.

MPEA plans to price the bonds in mid-November.

The agency projected the need to scoop-and-toss $177 million of debt service owed between 2023 and 2025 to cover a gap between tourism-related tax revenues and the steep bond repayment ramp, according to its three-year financial plan approved last spring.

While operations are on the mend, a full recovery to pre-pandemic levels isn’t expected until fiscal 2024 with operating profitability taking until fiscal 2025 to return.

“This scoop-and-toss plan is meaningfully reduced from the previous year’s three-year plan that called for annual refinancings of $110 million-$150 million,” S&P Global Ratings noted in its spring upgrade of MPEA to A-minus from BBB-plus after it upgraded the state to BBB-plus.

The agency last year restructured debt service coming due in fiscal 2022, providing some breathing room by lowering the overall tab to $113 million from $260 million and allowing the agency to avoid having to tap a state sales tax backup pledge, as it did in fiscal 2021.

The agency has met other goals including the replenishment of its $30 million reserve, and it’s repaid a $10 million 2021 draw on state sales taxes. The state provides a $350 million pledge of sales taxes which serves as the ultimate security for the bonds although the backstop is capped at $300 million from fiscal 2023 to 2026.

The MPEA statute requires it replenish reserves before repaying the state for the unreimbursed sale tax draw. Before 2021, the agency’s last draw — $57 million — occurred after the 2008 financial crisis. It wasn’t completely repaid until fiscal 2019.

Moody’s Investors Service, Fitch Ratings, and S&P impose caps on the MPEA rating to just above or below the state’s based on their interpretation of the security.

Fitch in May upgraded MPEA to BBB from the junk level of BB-plus, keeping it one notch below Illinois, where it caps the MPEA expansion project bonds based on the requirement for annual appropriation of sales tax revenues to the bond trustee.

S&P applies its priority-lien tax revenue debt criteria to the rating that takes into account both the strength of the pledged revenues and the general credit quality of the obligor government and so the rating is capped at one notch above the state.

Moody’s opted to hold the MPEA rating steady at Baa3 following its April upgrade of the state to Baa1 from Baa2.  Kroll Bond Rating Agency assigned a first-time rating of AA-minus with a stable outlook to the 2021 deal.