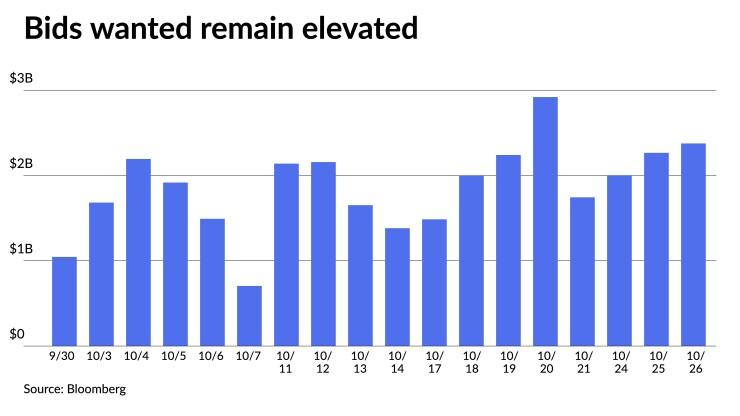 Municipals were steady in secondary trading while the last large deal of the week, the Triborough Bridge and Tunnel Authority’s $700 million of MTA Bridges and Tunnels green bonds, priced.

U.S. Treasuries saw more improvements with the 10-year falling below 4%, while equities ended mixed after gross domestic product and other economic data came in better than expected.

There has been a pullback of expectations on Federal Reserve tightening, which has, in turn, resulted in UST yields falling, said Cooper Howard, a fixed-income strategist focused on munis at Charles Schwab.

This has resulted in some underperformance on the muni side.

It was “not necessarily too surprising” because relative value was depressed with the 10-year ratio below 80%.

Historically, in October and November, the 10-year muni-USTs ratio averages about 90%. “Seeing some rising relative yields isn’t too surprising in that sense,” he said.

There continue to be strong outflows from mutual funds, though when looking closer at the movement of money, there are still inflows into money market funds.There’s “a lot of reallocation more towards shorter-term bonds, which makes sense, given the shape of the yield curve.”

“Much has been made about outflows from muni mutual funds,” he said. “However, the outflows are occurring mostly among intermediate-term and long-term funds while short-term MMFs are attracting assets.” The funds saw nearly $3 billion of inflows this week.

Refinitiv Lipper had yet to update its fund flows data as of publication.

“This dynamic has put pressure on relative yields for short-term munis which are now reading as rich relative to historical averages,” Howard added.

The heavy amount of bids wanted has caused a fair amount of selling pressure and added to the volatility.

Bids-wanteds have continued to climb above $2 billion this week with Wednesday’s total hitting $2.375 billion.

As the end of October approaches, Howard said it’s been a difficult month for municipal bond investors. Monthly returns are down about 1%, already on the back of being down 3.84% in September and then 2.2% on August.

But while muni performance has been ugly,it has not been as terrible as other fixed-income asset classes. Year-to-date, munis are down 13.02%.

While “that’s the worst performance in the history of the Bloomberg Municipal Bond Index, they’re outperforming both the Agg and corporate bond, which are down 16.7% and 20.9% [year-to-date], respectively, he said.

This poor performance has been rate-driven and not over concerns about credit quality, Howard and others have noted.

November and December will be dictated by Fed policy. He believes there will be another 75 basis point rate hike at the November meeting and more guidance provide at the meeting about what the Fed will do for the remainder of the year, which will influence the muni market.

Federal Open Market Committee meetings have generally caused issuers to pull back. “So if there is a path of higher Fed policy, tighter Fed policy, I would suspect that there would probably be low issuance,” he said.

The average seven-day simple yield for all tax-free and municipal money-market funds fell to 1.92%.

Taxable money-fund assets inflows of $12.20 billion to end the reporting week at $4.441 trillion of total net assets. The average seven-day simple yield for all taxable reporting funds rose to 2.72%.

“While this returned real GDP growth to positive territory following back-to-back quarterly contractions in H1 2022 and lifted the level of real GDP above that in Q4 2021, the underlying details of the GDP report point to continued softening in domestic demand amid elevated but moderating inflationary pressures,” they said.

Despite the rebound in headline real GDP, Levy and Ghzalah said “more nuanced gauges of domestic demand point to a broad-based slowdown in real economic activity that is likely to persist as tightening financial conditions begin to bite.”

He believes that “this combination of elevated inflation, which has been eroding household purchasing power, as well as the aggressive pace of monetary tightening will cause the economy to slip into recession starting in the second quarter of 2023.”

The U.S. economy seems to “have bounced back from those two negative GDP readings with a solid 2.6% improvement with economic activity … but when you dig into the numbers it is clear that an economic slowdown is here,” said Edward Moya, senior market analysts at OANDA.

While the international trade component helped this quarter, that won’t remain moving forward. ”Consumer spending is softening and prices are coming down” faster, and business investment is weakening, Moya said.

The figure marked the end of the technical recession, according to a Morgan Stanley Research analysts “The upside was driven by an increase in exports, consumer spending, business investment, and government spending,” they said. “This was somewhat offset by a decline in residential investment and inventory investment.”

Morgan Stanley Research strategists expect “3Q22 to mark the peak in quarterly growth, as the cumulative effect of tighter monetary policy begins to push growth below potential.” They predict weaker growth in Q4.

Bahamian Attorney General Insists FTX Is the Subject of an ‘Active and Ongoing Investigation’
Ratings agencies say higher ed is pressured
November on pace for best month since 1986
For Emily Dickinson’s Birthday, Visit Her New England Home
Ethereum derivatives look bearish, but traders believe the ETH bottom is in