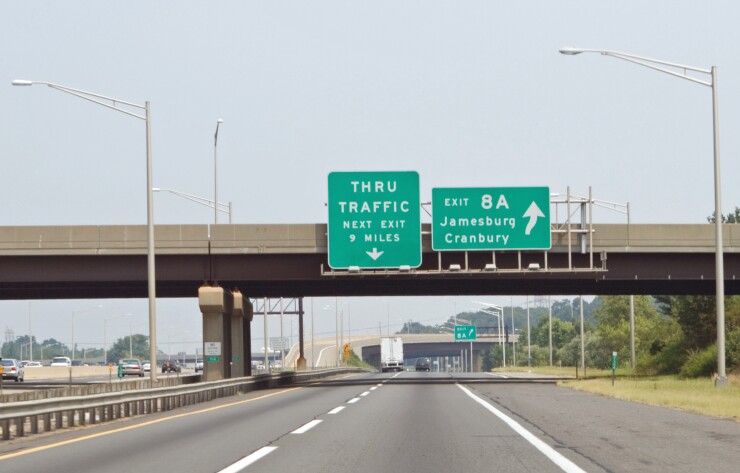 The New Jersey Turnpike Authority is scheduled to close next week on a $700 million revenue bond deal.

Proceeds are destined for improvement projects across the 290 miles of roadway that make up the New Jersey Turnpike and Garden State Parkway.

The scheduled work will include “capacity enhancements on both the Turnpike and the Parkway, bridge preservation and security, and drainage, roadway lighting and other improvements, including non-roadway technology improvements,” according to offering documents.

The bonds are backed by Turnpike Authority toll revenue, which according to financial reports pulled in $1.1 billion from drivers in 2021.

Since 2020, the Turnpike Authority has raised toll rates, with toll rates jumping by 36% on the turnpike and 27% on the parkway. The authority plans to continue piecemeal increases on both roadways going forward, totaling no more than 3% a year, which helps provide the credit an extra layer of security, said the offering statement.

Those increases have coincided with the launch of the authority’s 20-year capital plan in 2019, which calls for billions in funding for wide-ranging improvements to bridges, roads, interchanges, and associated facilities and technology.

In the plan’s first year, the authority sold $449.1 million of revenue bonds. Following a freeze during the pandemic, it then sold $1.5 billion of new bonds in two offerings in 2021.

With its latest issuance, the NJTA is averaging around $1 billion in spending a year on capital improvements.

In Febuary, S&P upgraded the Turnpike Authority to AA-minus from A-plus, citing in its decision the authority’s “operational resilience” and “rate setting flexibility,” as key to ensuring long-term liabilities.

However, reliance on a single income stream for servicing the new debt could become problematic, analysts added.

“Annual toll increases of 3% began in 2022, which should remove the need for periodic large rate increases,” Fitch said. “Nevertheless, some uncertainty remains as to the level of political and user support for future rate increases above inflation.”