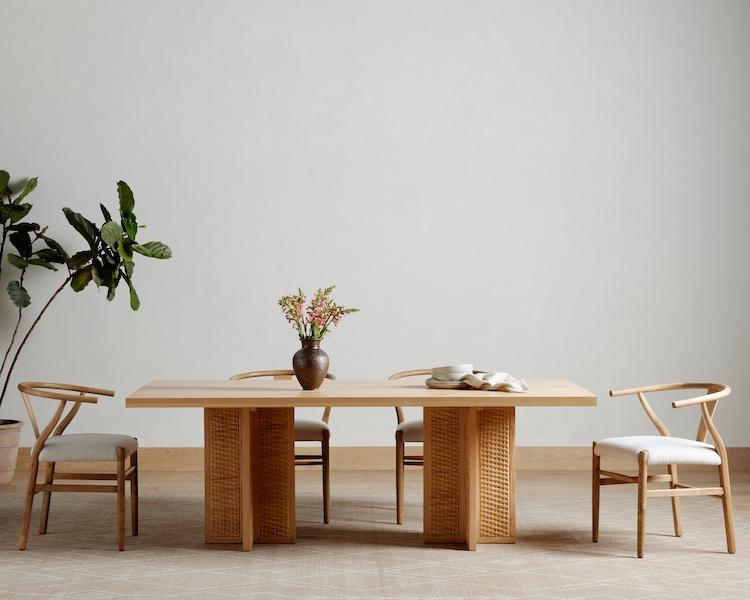 If you’ve ever purchased or searched for a piece of furniture from a major national retailer, you’ve probably come across the brand Four Hands without even knowing it. But don’t be fooled, Four Hands is a major name in the furniture industry earning nearly $500 million in revenue in 2021, outpacing the two previous years combined. While it is mostly known as a “brand behind the brand”, or a brand lauded by interior designers, due to social media they’ve become far more consumer-facing in recent years.

Headquartered in Austin, Texas, Four Hands employs a team of nearly 700 employees. There are additional distribution centers and showrooms located in High Point and Las Vegas as well as offices in China, India, Indonesia, Mexico, and Vietnam.

Founded originally founded as an international importer of antiques and handicrafts, Four Hands has grown to sell thousands of products in a variety of categories at many of the top national furniture retailers as well as boutique online outposts including Kathy Kuo and Paynes Gray. It has become a brand that stands out for having high-quality, unique pieces that quite simply don’t look like a copy of everything else on the market.

I recently spoke with CEO Matthew Briggs, who joined Four Hands in 2001. He is a major part of how the brand has evolved over the past two decades to become the powerhouse that it is today.

Amanda Lauren: Four hands currently has more than 2000 different products, which is a very large number. How do you maintain an inventory of this size with such a strong emphasis on quality and design?

Matthew Briggs: In 2006, Four Hands was just importing, finding things we liked, and putting a look together. But [then we started to realize] we were middleman, and that wasn’t a formula for long-term success.

We realized we had to become the creators in the supply chain. So we started hiring great product people, and partnering with great designers. We have over 40 people working in the United States and we send them to every international trade show from Paris, Cologne, Milan, Guadalajara, and Mexico City, to Miami, High Point, and Vegas. And we’ve got people out there who love furniture, love the industry, and are just looking for what’s interesting, as well as what trends are in their infancy.

The other thing is due to longevity in the industry, the scale, and the way that we function as a company, we’ve managed to partner with the best and most creative factories in the industry. Then doing [nearly] all the design in-house.

We essentially create the product from step one. And it’s a huge differentiator in the industry, because, there are a lot of people who don’t do any product development or research at all. They merely copy what we do, or what other creators in the industry do.

Briggs: Originally, we were sort of this brand behind the brands. But once we were on social media platforms such as Instagram, it was all very organic. Designers would start calling us out and tagging us because I think the whole industry has become more transparent.

I think it’s a great example of how the industry has evolved in a really good way. When I started out, it was all about secrecy—hiding your sources, and protecting markets. What I mean by that is, if you were a local retailer, in a city, you didn’t want anyone to know where your inventory was purchased. Store owners didn’t even tell their salespeople, they hid the brands. And then they went to everyone they bought from and insisted on exclusivity in a 25-mile or so radius. So it was all about owning that market. And on a national level, we experienced that. One of the amazing things that the design community has done for the industry is, they’ve just blown all that away. They’re way more transparent.

Lauren: What is it like being essentially a non-consumer facing brand that some consumers are very well aware of?

Briggs: We like having a more public-facing, persona now because we put so much effort into our own look. We do so much of our own photography and creating digital assets. We don’t think anybody represents our brand better than we do. So, we love the fact that we’re not relying on a national or a regional retailer to represent our products in photography or print.

Lauren: Do you think the average consumer has any brand awareness when it comes to home furnishings?

Briggs: The average consumer doesn’t necessarily know that but if someone’s building a house and they start getting into it, pretty soon they figure things out. Who are the best people that make wallpaper? Who makes the best paint colors, etc?

Maybe not every person in the country knows who we are. But if people have taken an active interest in the design space, or the furniture space, for sure know who we are.

Lauren: Due to demand, every major furniture brand has seen growth due to the pandemic in the past three years. Are there other things that have attributed to Four Hands’ growth in recent years?

Briggs: Growth was pretty strong before going into the pandemic because we had such a strong emphasis on bringing great new products to market. We’ve become a lot better in the last ten years and started seeing our growth accelerate. A lot of this had to do with the ease of doing business with us—the digital assets, operational excellence, product development, etc.

Briggs: One of the biggest problems in the very short term right now is an oversupply of products in the market. Everyone’s stocked because everyone sort of anticipated the party going on forever. So what we’ve seen throughout the industry is that pretty much everyone has a lot of inventory. We’re going from an environment where there was almost no discounting whatsoever to people, they’re having to very rapidly readjust the way they’re thinking about their product and the way they’re thinking about the sales process, and embrace the fact that there is going to be a promotional environment that can get in.

That’s extremely uncomfortable. For a lot of people, it’s been such an amazing few years for business because price was not the deciding factor. And I think we’re back to an environment now where people are going to get creative again, and find whole new ways of selling products.

Briggs: We are launching really nice high-end table games. Then there are areas like outdoor umbrellas, which is a very niche-specific market, and outdoor fireplaces. We don’t see those as individually huge markets, but we see them as really important. For our customers, we put our stamp on that look, and bring a product that Four Hands look and feel to that part of the market.

The conversation has been edited and condensed for clarity.