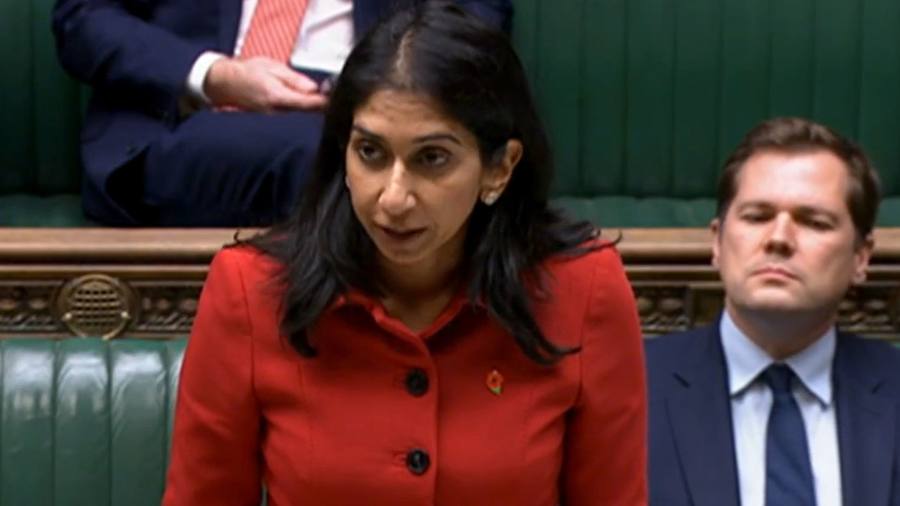 UK home secretary Suella Braverman was fighting for her political life on Monday as she was accused of breaking the law over the government’s treatment of asylum seekers.

Rishi Sunak, the prime minister, was coming under increasing pressure to fire Braverman, who admitted earlier she had used her personal email seven times to handle documents about government business.

Braverman is under intense scrutiny about the crisis at an immigration processing centre at Manston in Kent, where conditions were described as “wretched” last week by David Neal, chief inspector of borders and immigration.

Shadow home secretary Yvette Cooper told Braverman in the House of Commons that her failure to heed legal advice about the prolonged detention of migrants at Manston had led to dangerous overcrowding and outbreaks of disease, including diphtheria.

Cooper suggested the home secretary’s refusal to adopt contingency plans to ease the overcrowding, including at a meeting on October 19 — the same day she admitted wrongly using her private email for government business — amounted to her knowingly “breaking the law”.

“Can she confirm or tell us that she breached the ministerial code three times in a single day? How is anyone supposed to have confidence in her as a home secretary given these serious issues?” asked Cooper.

Braverman also came under fire from some Tory MPs, with backbencher Sir Roger Gale blaming her directly for the crisis at Manston, which is in his constituency.

About 4,000 migrants are being held in a facility designed for a maximum of around 1,600, with many staying far longer than is legally allowed.

“That facility operated very efficiently indeed until five weeks ago when I am afraid the home secretary took the policy decision not to commission further accommodation — it is what led to the crisis at Manston,” said Gale.

Braverman, who was reappointed as home secretary by Sunak only a week after she had resigned from Liz Truss’s shortlived government, acknowledged the immigration system is “broken”.

But she was defiant, saying only the Conservative party was “serious about stopping the invasion of our southern coast”.

She denied she had ignored legal advice relating to Manston. She also denied allegations she blocked the use of alternative accommodation to house migrants staying there, saying that more than 40,000 people crossed the English Channel to the UK on small boats this year, and that she was “energetically” seeking solutions.

“On no occasion have I blocked the procurement of hotels or alternative accommodation to ease the pressure on Manston,” she said.

Braverman added there had been agreements with more than 30 hotels for 4,500 bed spaces since September 6, when she was appointed home secretary by Truss, and 9,000 people had been moved from Manston in that time.

Two Whitehall officials said Braverman had opposed the use of hotels to cut the number of migrants at Manston.

Some Tory MPs expressed surprise she was so forthright in her Commons statement, and predicted there could be a legal challenge to the government’s treatment of asylum seekers.

One former minister said: “Manston will get judicially reviewed and there could even be a public inquiry. At that point, all of the paper trails will come out and we’ll see who is right.”

Braverman was forced to resign on October 19 after it emerged she had that day used her personal email to send a draft government document about immigration policy to Sir John Hayes, a Conservative MP and close ally.

In a letter to Dame Diana Johnson, chair of the Commons home affairs committee, Braverman on Monday admitted that using her personal IT on October 19 for official business constituted a breach of the ministerial code, partly because it flouted government security guidelines.

She also revealed that she had used her personal email to handle official documents on six other occasions before her resignation.

“The Home Office conducted a review of my use of personal email . . . the review . . . identified that within the period between 6th September and 19th October, I had sent official documents from my government email to my personal email address on six occasions,” she wrote in the letter to Johnson.

Braverman added these emails were within “permitted use”, and that such use of her personal IT was reasonable.

In her letter to Johnson, Braverman wrote: “I am sorry for the errors of judgment set out above.”