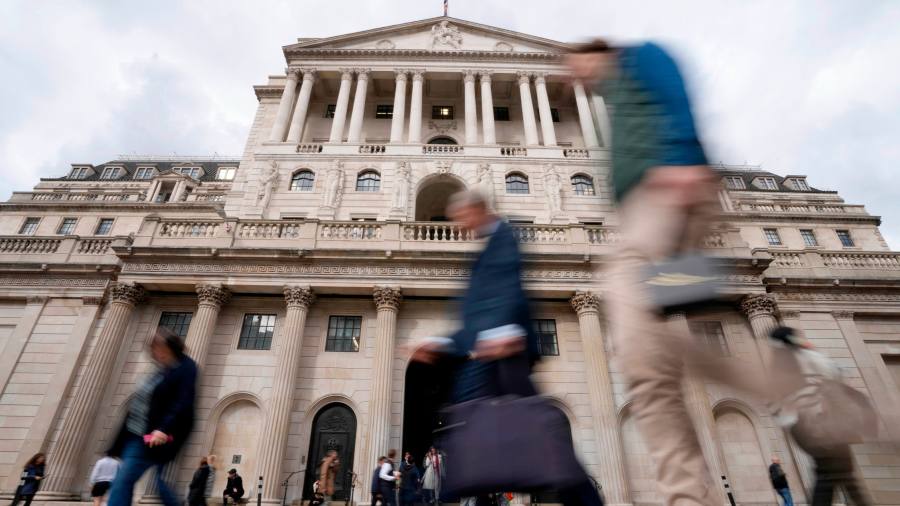 The Bank of England has signalled that borrowing costs will not rise as much as markets expect in the future, even as it imposed the biggest rate rise for three decades to combat soaring inflation.

The BoE’s 0.75 percentage point increase to 3 per cent took interest rates to their highest point since 2008. But the central bank issued unusually strong guidance that rates would not need to rise much further to bring inflation back to its 2 per cent target, partly because it forecast a prolonged recession ahead.

“We can make no promises about future interest rates,” said BoE governor Andrew Bailey. “But based on where we stand today, we think [rates] will have to go up by less than currently priced into financial markets. That is important because, for instance, it means that the rates on new fixed-term mortgages should not need to rise as they have done.”

The pound fell almost 2 per cent against the dollar, which had been buoyed by a contrasting message from the Federal Reserve that US interest rates would increase by more than Wall Street anticipates.

The BoE’s 0.75 percentage point rise, the highest for 30 years, followed identical increases by the Fed on Wednesday and the European Central Bank last week as monetary authorities worldwide sought to contend with rising inflation, which has reached a 40-year high in the UK of 10.1 per cent.

Seven of the nine Monetary Policy Committee members voted for the rise, maintaining that “a larger increase” this month “would help to bring inflation back to the 2 per cent target sustainably in the medium term, and to reduce the risks of a more extended and costly tightening later”.

But guidance and economic forecasts published by the BoE suggested it was taking a more dovish stance on interest rates than the Fed. Jay Powell, the US central bank chair, this week labelled talk of pausing interest rate rises as “very premature”.

The BoE projected that if it increased interest rates to 5.25 per cent, Britain would be plunged into the longest recession since the second world war — eight quarters of contraction — and inflation would fall to zero in three years’ time.

But, in a strong signal that it believed it may have already done the bulk of the work needed to curb inflation, the central bank highlighted an alternative in which rates do not rise any further from the current 3 per cent.

Even if interest rates stay on hold at 3 per cent, the BoE still forecasts a recession for five quarters, based on higher energy prices and mortgage costs.

By contrast, Christine Lagarde, the ECB president, struck a hawkish note about eurozone policy, saying on Thursday that a “mild recession” in the region would not be enough to “tame inflation” on its own.

The BoE said the majority of the MPC believed “further increases” might be required for inflation to return sustainably to target, but stressed that recent market pricing for the peak in interest rates had been too high.

In a further dovish signal, the central bank said its forecasts were based on government policy as of October 17. They therefore do not factor in prime minister Rishi Sunak’s plans, due to be announced this month, to make £50bn of savings, which would put further downward pressure on inflation.

The MPC said it would “take account of any additional information in the government’s autumn statement at its December meeting and in its next forecast in February”.

November on pace for best month since 1986
DiNapoli: NYS pension fund at $233.2B despite -3.85% return
Ether tests $1,200 but bears better positioned for $1.13B options expiry on Nov. 25
German property market will slow — but no significant correction ahead, central bank says
Net migration to UK hits record high of 504,000