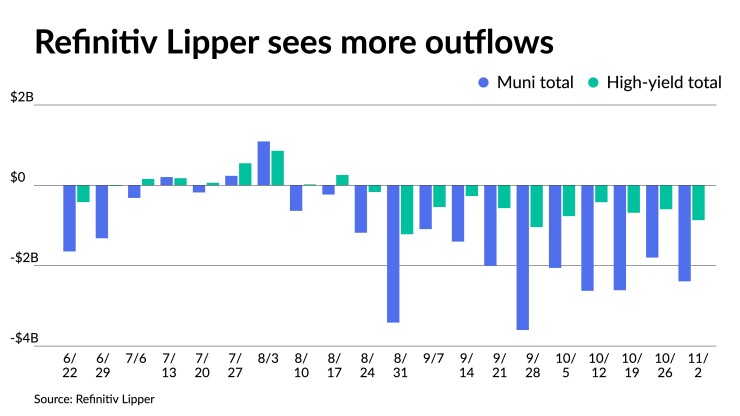 Municipals were weaker in secondary trading Thursday as a $1 billion-plus deal from the City and County of Denver took focus in the primary and mutual fund outflows grew by another $2.4 billion. U.S. Treasury yields rose, with the two-year seeing the greatest losses, and equities ended in the red as markets continue to digest Fed policy moves.

Triple-A yields rose two to four basis points while UST saw yields rise as much as nine basis points on the two-year to highs last reached in July 2007. The two-year UST is currently 53 basis points higher than the 30-year.

Refinitiv Lipper reported $2.389 billion of outflows from municipal bond mutual funds for the week ending Wednesday after $1.798 billion the week prior.

“Broader gains are being made in early November business as potential cash is forced into the secondary market for meaningful product,” said Kim Olsan, senior vice president of municipal bond trading at FHN Financial.

Large-issue utility credits, she noted, such as “Aa1/AA+ Salt River AZ Power bonds can be reliable barometers of buyer confidence in current levels.”

“Intermediate maturities in the issue are trading with nominal spreads to AAAs, as compared to levels from May (during a large pullback) that reached +20/AAA,” she said.

“Whether or not further gains can be made will depend on how much weight municipal bidders place on UST moves — follow any weakness or defy it in light of moderating supply,” Olsan said.

Per Refinitiv Lipper, the four-week moving muni fund flow average is negative $2.3 billion, versus the Investment Company Institute’s negative $4.5 billion, and Olsan said, “absolute yields have not continued to trade off on that data.”

“Rather, attractive cross-market muni rates (100% or greater relative value and 8% TEYs in long high grades) and modest supply conditions (and projections) appear to have switched up how, not why, investors are participating in the asset class,” she said.

All of those factors lead to weakness in the market.

But on the other side, supply has been lower than expected for the year.

And due to the FOMC meeting this week and Veterans Day next Friday, supply is not anticipated to pick up any time soon, he said. Thanksgiving is just on the horizon, followed by the holiday season, all leading to more instances of less issuance.

That lower issuance could help support the market a little bit as “we have these other negative factors going into the end of the year,” Brandon said.

“I generally get the feeling that the market wants to turn the page and get to 2023,” he said. “2022 has been such a terrible year … what people are starting to do is set themselves up for what is going to happen in January.”

Trade data from the Municipal Securities Rulemaking Board indicate “a growing share being traded in 4s at the expense of more costly 5s,” she said.

She said that “any eventual softening in the economy and plateau in rate hikes” would favor 4s coupons outperforming 5s.

The average seven-day simple yield for all tax-free and municipal money-market funds fell to 1.81%.

Taxable money-fund assets inflows of $28.31 billion to end the reporting week at $4.469 trillion of total net assets. The average seven-day simple yield for all taxable reporting funds rose to 2.77%.

“Given the historically fast progress the Fed has made in lifting the policy rate, Chair [Jerome] Powell in his press conference emphasized that ‘the important question’ is not how quickly the Fed will need to raise rates over the next few meetings, but rather where rates will need to end up and how long they will need to remain elevated,” said Mickey Levy and Mahmoud Abu Ghzalah of Berenberg Capital Markets.

Historically, they noted, “the Fed has always lifted the policy rate above inflation, and [Wednesday’s] outsized policy rate increase and commentary from Chair Powell indicating the terminal rate may need to rise above the Fed’s current dot-plot projection of 4.6% at year-end 2023 implies the real policy rate will move comfortably into positive territory early next year.”

“After initial hopes of a more dovish tone, it appears the remarks convinced the market of the Fed’s persistence to continue the current hiking cycle for now,” said Phil Rasori, COO of Mortgage Capital Trading.

“The Fed is likely to maintain its hawkish stance well into 2023, until recessionary conditions or financial stability concerns emerge,” Levy and Ghzalah said.

And while recession risks are rising, James Knightley, ING’s Chief International Economist, said “that is the price the Fed is prepared to pay to get inflation under control.”

Levy and Ghzalah predict the Fed “will step down the pace of rate hikes to 50bp at its December meeting, but also … lift rates by a further 50bp” during its first meeting in 2023, “which would lift the Fed funds rate target range to 4.75%-5.00%.”

They continue to anticipate “a mild recession will unfold over the course of 2023, which will prompt the Fed to ease policy toward the end of the year.”

Robert Bayston, head of U.S. Government and Mortgage Portfolios at Insight Investment, also expects “a smaller 50bp hike in December, representing a planned ‘downshift’ rather than a strategic ‘pivot’.” However, he noted “risks are skewed toward another 75bp hike, depending on upcoming data releases.”

“The Fed’s rate hikes have had more impact on financial assets this year than the real economy … reflected by tightening financial conditions over the year,” he said.

The upside is that tighter financial conditions, including higher rates, credit spreads and lower equity valuations, help the transmission of tighter monetary policy into the real economy, Bayston said.

“However, there is a danger that, as the Fed downshifts to a slower pace for tightening, the Fed will inadvertently loosen financial conditions if markets rally in the aftermath,” he said.

The challenge for the Fed, Bayston said, is to communicate to the market “its desire to keep monetary policy and financial conditions tight over the medium term.”

“It may do this by continuing to deploy hawkish rhetoric,” he said. “Perhaps that is why Powell was clear to send a  message that the end of its hiking cycle is not yet in sight.”