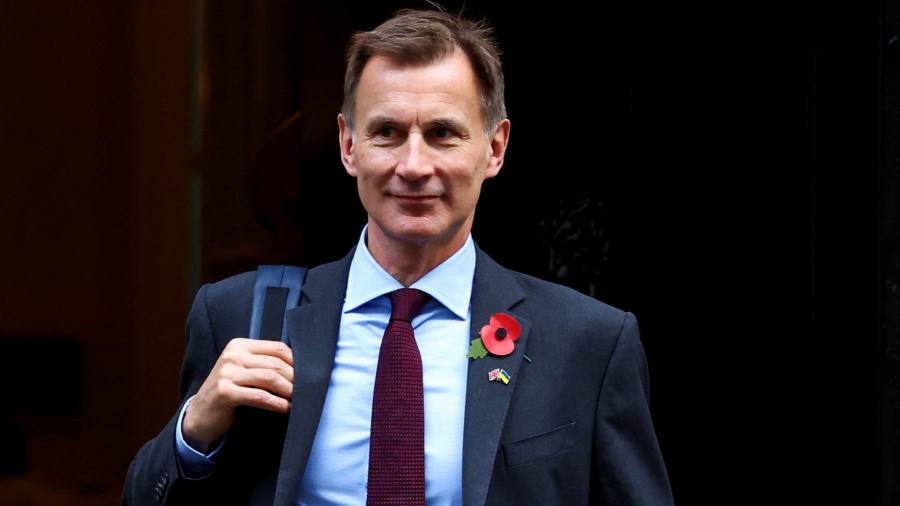 Jeremy Hunt is planning a stealth raid on inheritance tax in the Autumn Statement as part of the chancellor’s attempt to raise about £54bn through tax rises and spending cuts to fill a hole in the UK public finances.

Government officials said Hunt was drawing up plans to extend a freeze in the inheritance tax “nil-rate band” from 2025-26 to 2027-28, a move that would raise at least half a billion pounds for the Treasury.

The plan is part of a broader strategy to use “fiscal drag” to surreptitiously raise the funding needed to restore order to the public finances when Hunt delivers his Autumn Statement on November 17.

With inflation high, Hunt plans to keep tax-free thresholds at the same level for various levies, including those on income, pensions and capital gains to expand the state’s tax haul by billions of pounds via the back door.

The move will hit traditional Tory voters but Hunt and Rishi Sunak, the prime minister, have insisted that those with “the broadest shoulders” must pay more.

Treasury insiders say Hunt is looking at a fiscal contraction of about £54bn with the aim of cutting debt as a share of national income in the fifth year of the forecast period. That would include “headroom” — or room for error — of up to £10bn.

Meanwhile the government has dropped plans to build a £250mn “national flagship” — dubbed “HMS Brexit” — which was intended to drive trade deals around the world.

The suspension of the publicly funded project, billed as a successor to the Royal Yacht Britannia but derided by critics, is the first major spending cut ahead of next week’s announcements.

However, Sunak has decided against a big increase in bank taxation, according to people briefed on preparations for the Autumn Statement, sticking to the plans he originally set out as chancellor last year.

Hunt has already reinstated Sunak’s plan to increase corporation tax rates to 25 per cent next April. Liz Truss’s administration had proposed sticking with the existing rate at 19 per cent.

Before Sunak became prime minister, Hunt had kept on the table the current 8 per cent “bank surcharge”, which could have seen the effective tax rate for banks rise from 27 per cent to 33 per cent from next April.

Sunak has insisted on sticking to the 25 per cent corporation tax rate from next April but will cut the bank surcharge from 8 per cent to 3 per cent. This means banks will pay an effective rate of 28 per cent — higher than now.

The Treasury said: “Banks should continue to make a fair, sustainable tax contribution into the public purse, but we recognise the need for the tax system to support our objectives for a strong and competitive banking sector.”

Hunt’s Autumn Statement will use “stealth” measures to increase the tax take. The original freeze in the inheritance tax threshold to 2025-26 was announced in the spring Budget of 2021 by Sunak when he was chancellor.

That policy was set to raise £1bn over four years, according to the Treasury at the time. But that figure is now likely to be far higher because of soaring inflation, according to Stuart Adam, senior economist at the Institute for Fiscal Studies think-tank.

Extending the threshold freeze for another two years beyond 2025-26 would raise £400mn-£500mn if inflation returns to its target level of 2 per cent, according to Adam. If inflation is higher, however, then the freeze would raise more money for the state.

In 2017, the government introduced a new “transferable main residence nil-rate band of £175,000”, which applies when a home is left to direct descendants.

Tax receipts from inheritance tax have soared from £2.3bn in 2009 to £6bn in 2021-22 as property prices have rocketed while the threshold has stayed the same.

The Treasury said it would not comment ahead of the Autumn Statement.

With just 10 days until Hunt stands up in the Commons, the chancellor is preparing a huge budgetary tightening on the same scale as his predecessor George Osborne’s austerity Budget of 2010.

The final total for spending cuts is yet to be decided, reflecting daily changes in gilt markets, but is now higher than ministers expected a fortnight ago.

Under his draft proposals Hunt currently intends to cut £33bn from public spending while raising taxes by about £21bn, according to officials, which would imply tight restraints on departmental spending.

The chancellor could also break the “triple lock” on increases in the state pension, which ensures that retirement payments rise in line with inflation, average earnings or by 2.5 per cent each year, whichever is higher. Another controversial option would be to raise benefits in line with average earnings rather than inflation.

Hunt has warned of “eye-wateringly difficult” decisions ahead.

The chancellor is looking at freezing income tax thresholds for another two years until 2027-28, as well as raising the taxation rate on share dividends and cutting the tax-free allowance on dividend income.

He is also examining the case for cutting the reliefs or allowances for capital gains tax, which is paid on shares and second homes.

The chancellor is expected to freeze the pensions lifetime allowance for another two years to 2027-28 at its current rate of £1,073,100.