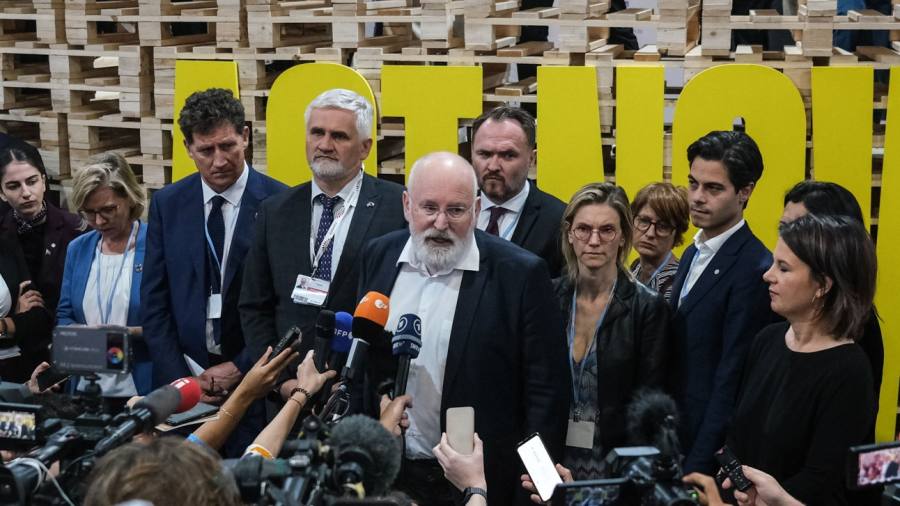 The outcome of key UN climate talks hung on crunch negotiations over global warming targets on Saturday, after the EU made a dramatic threat to walk away from the fraught COP27 summit earlier in the day.

National negotiators said that progress was being made on the previously deadlocked issue of “loss and damage” funding by rich countries for poorer nations suffering the effects of climate change.

But Jennifer Morgan, German climate minister, said no deal would be approved unless it included measures that would “keep 1.5 alive” — a phrase that became the mantra of last year’s COP26 talks in Glasgow and refers to a goal in the 2015 Paris Agreement to keep global warming well below 2C from pre-industrial times, and ideally 1.5C.

A group of countries known as the “high ambition coalition”, which includes the UK and Germany, said that both aspects needed to be reflected in the final agreement.

The summit was due to end on Friday but extended into the weekend as negotiators remained in disagreement about key issues.

“Everything is on the table, these are high stakes, capitals are being called,” said one European diplomat.

The question of how countries would step up their cuts in emissions remained at stake on Saturday, fuelling some negotiators’ concerns that the 1.5C target might be in jeopardy.

“We’d rather have no decision than a bad decision,” Timmermans told reporters at Sharm el-Sheikh.

“All ministers . . . like myself are prepared to walk away if we do not have a result that does justice to what the world is waiting for, namely that we do something about this climate crisis,” he said.

China and Saudi Arabia were among the countries resisting increased action on cutting emissions as well as the proposal by the EU on “loss and damage” funding for the most vulnerable nations, according to people with knowledge of the discussions.

While climate COPs are always fractious and rarely end on time, it is unusual for a large group of western countries such as the EU to make a last-minute threat of a walkout.

“No one should underestimate” the EU’s threat to walk out, said Romina Pourmokhtari, Sweden’s minister for climate and the environment. “There is no one here who is willing to return to our countries and explain to them why we took a step back.”

The bloc has stressed the importance of building on last year’s Glasgow Climate Pact, which included a commitment to reduce the use of coal, the dirtiest fossil fuel.

COP27 president Sameh Shoukry, Egypt’s foreign minister, said on Saturday that the draft text of the final agreement would keep the 1.5C goal alive while taking a “holistic approach in dealing with the challenges of climate change”.

Shoukry said there was “equal dissatisfaction in all quarters” but insisted the “vast majority” of parties would find a basis for an agreement.

“There is never a perfect solution but there is an effort that I have exerted to provide the basis that we can move forward upon,” Shoukry said. “Reaching a point of convergence takes some effort.”

There were also concerns about how the Egyptian presidency was handling the summit. “I’ve never experienced anything like this: untransparent, unpredictable and chaotic,” said one delegate.

Countries’ negotiating teams were only given a short time to review updated texts for several key outstanding issues in the early hours of the morning; this was “not a usual procedure,” said one EU official.