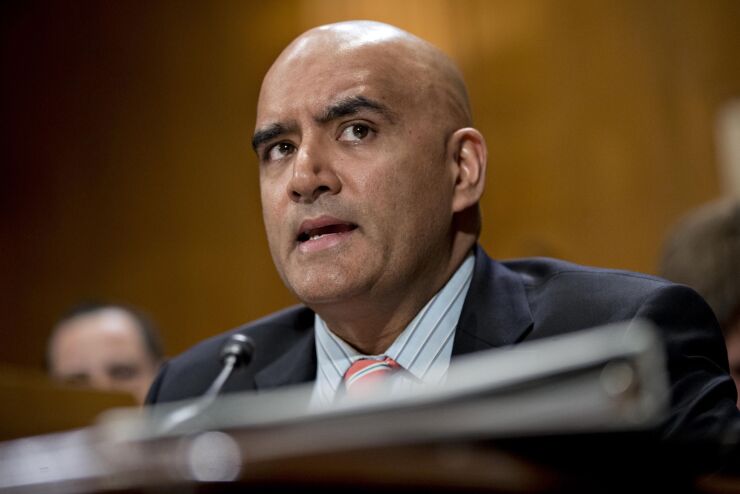 The FHWA administrator position has “been vacant for way too long,” said Sen. Tom Carper, D-Del., chair of the Environment and Public Works Committee, during a committee hearing that saw a bipartisan voice vote to confirm President Joe Biden’s nomination. The move sends the nomination to the full Senate floor, where it likely will be picked up during the current lame-duck session.

“This puts us one step closer to the kind of leadership we need,” Carper said.

Biden tapped Bhatt in July to lead the FHWA, which has been without a director since Biden took office.

If confirmed by the full Senate, Bhatt would take over the FHWA during a key time for the agency, which has a major role in the implementation of the $1.2 trillion Infrastructure Investment and Jobs Act. He would join Transportation Secretary Pete Buttigieg’s leadership team.

The rollout of the IIJA promises to be a key focus when Republicans take the House in January. Incoming chair of the House Transportation and Infrastructure Committee, Rep. Sam Graves, R-Mo., plans “aggressive” oversight of the law’s implementation, according to Roll Call.

Bhatt, a former state DOT official who is currently an executive at the infrastructure consulting firm AECOM, has a “nearly perfect resume” for the FHWA spot, Carper said Tuesday.

“President Biden waited a long time, too long,” Capito said. “I have expressed my dissatisfaction and opposition to a number of the decisions that the FHWA has taken without a Senate-confirmed leader,” she said, apparently referring to deputy administrator Stephanie Pollack’s December memo that indicated the administration would not prioritize highway expansion projects.

At a September hearing, Bhatt told the panel he would implement the IIJA as required under statute, Capito noted. “I am supporting Mr. Bhatt’s nomination today because of those commitments and his record of getting things done and projects that he has built as a past leader for multiple state departments of transportation.”

Bhatt has worked at three state transportation agencies and at the FHWA under President Obama.

He headed the Colorado Department of Transportation from 2014-2017, was the Delaware DOT secretary for just under four years before that, and served as deputy executive director of the Kentucky Transportation Department from 2005 to 2008. He is currently senior vice president of global transportation innovation at infrastructure consulting firm AECOM. He was the FHWA’s associate administrator for policy and government affairs under President Obama from 2009 to 2011.