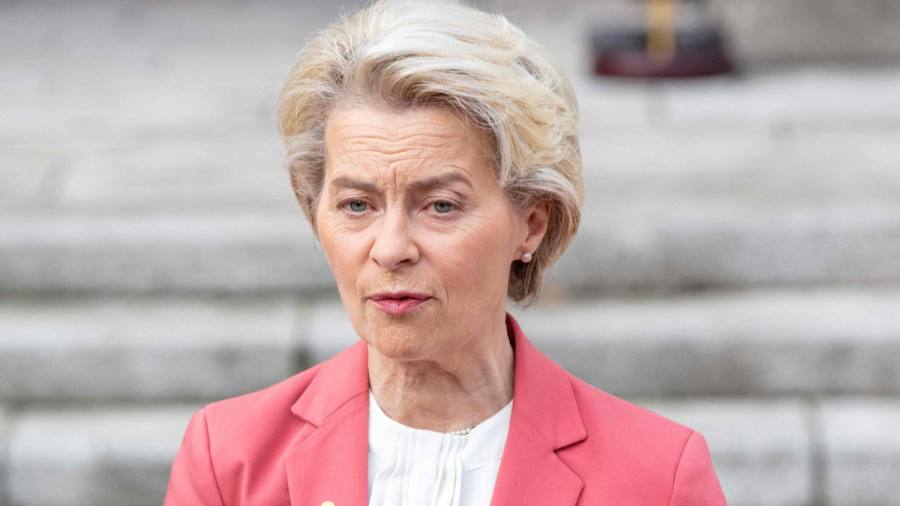 The EU must “simplify and adapt” its rules on state aid to counteract the competitive effects of the US’s new $369bn climate package, European Commission president Ursula von der Leyen said on Sunday.

Washington’s measures have soured ties between Washington and Brussels and triggered a chorus of demands from EU states for a competitive response, fuelling fears of a trade war.

The potentially far-reaching proposals from the head of the EU’s executive underscore the scale of concern in Brussels about the US Inflation Reduction Act. EU and US officials are due to meet to discuss the topic on Monday.

US president Joe Biden has called the legislation the most “aggressive action” his country has taken to confront the climate crisis. But European allies complain that measures such as tax credits and subsidies for products such as electric vehicles give US-based enterprises an unfair advantage and will encourage EU industries to relocate.

Von der Leyen said on Sunday that in response, the EU must overhaul its public investment regulations and reassess whether “new and additional funding at the EU level” was required. Brussels should also continue to demand the US adjusts the IRA to resolve contentious issues, she said.

“There is a risk that the IRA could lead to unfair competition, could close markets and fragment . . . critical supply chains,” von der Leyen said. The EU should “take action to rebalance the playing field . . . [and] improve our state aid frameworks”.

“We are very careful to avoid distortions in our single market . . . But we must also be responsive to the increasing global competition on clean tech,” von der Leyen added. “If we see that investments in strategic sectors are leaking away from the EU, this would only undermine the single market. And that is why we are now reflecting on how to simplify and adapt our state aid rules.”

Other key EU figures have also called for a collective response to the US measures. European Council president Charles Michel, who represents the leaders of the EU’s 27 member states, told the Financial Times that there should be a renewed debate about common financing.

The union’s competitiveness is being hit by soaring energy prices caused by Russia’s war against Ukraine and the IRA subsidies. Michel said that while some member states had the firepower to support embattled industries, other capitals were stretched and were making legitimate demands for a discussion on new EU money.

“It is good that some member states have the possibility to mobilise money to support economic development, but it is very important to make sure it doesn’t create distortions in the single market,” he said.

He said the discussion on whether there should be a fresh injection of EU funding was a repeat of the debate that led up to the creation of the bloc’s unprecedented Covid-19 recovery fund. The question, he added, was “are we ready or not to mobilise financing, and how do we finance the money we need?”

Von der Leyen’s call for changes to the bloc’s state aid rules follows a series of emergency moves in recent years aimed at streamlining the regime, such as easing restrictions on payments to private companies in response to the Covid-19 pandemic and the energy crisis.

However, further steps to loosen the rules will be contentious among member states given concerns that extra spending by deep-pocketed capitals led by Germany will skew the single market. Some other member states have largely exhausted their spare fiscal firepower, with debt-to-GDP ratios of at least 100 per cent.

While acknowledging the risk of a “subsidies race”, von der Leyen said a trade war with the US was not in anyone’s interests, and that “competition and co-operation can be two faces of the same coin”.

“Of course, Europe will always do what is right for Europe. So yes, the European Union will respond in an adequate and well-calibrated manner to the Inflation Reduction Act,” she said.

“But does this mean that we will engage in a costly trade war with the United States in the middle of an actual war? This is not in our interest. And nor in the interest of the Americans,” she added.

Biden said on Thursday while hosting French president Emmanuel Macron in Washington that he was open to addressing EU concerns.

“The president was clear there are ways we can address Europe’s concerns. This is a matter we are working out through substantive consultations with European counterparts,” a White House spokesman said on Sunday.

“We are confident that both the United States and Europe can create good paying jobs and tackle the climate crisis — and not at each other’s expense.”