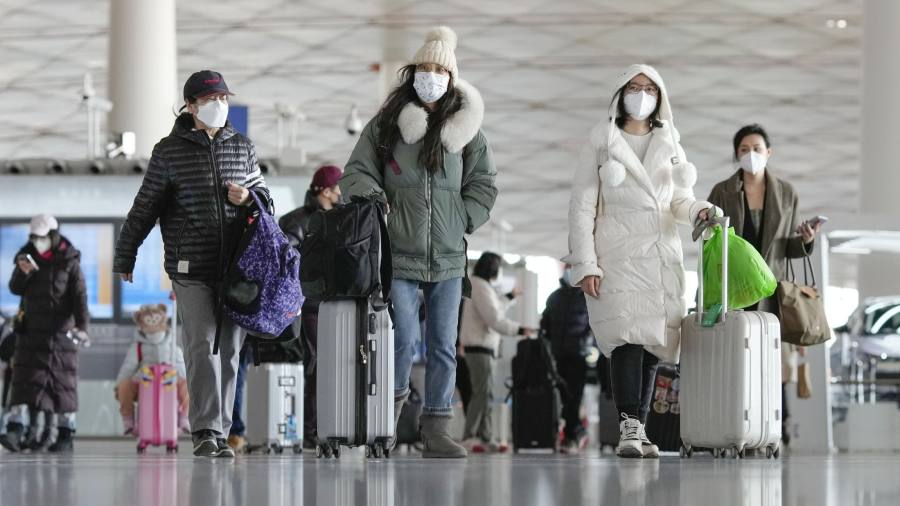 The US said it would require negative Covid-19 tests for air passengers travelling from China as countries rushed to impose restrictions after the abrupt end of Beijing’s zero-Covid containment policy resulted in a surge in cases.

Washington’s move on Wednesday came just hours after Italy announced it will test all air passengers arriving from China for the virus, becoming the first western country to set new rules following the jump in infections.

The Centers for Disease Control and Prevention said that from January 5, travellers boarding flights to the US from China, Hong Kong and Macau would need a negative Covid-19 test or proof they had recovered from a previous infection. The requirements also apply to passengers arriving in the US via a third country and to those connecting to other destinations through the US.

The new measures are intended to “slow the spread” of the virus in the US following the surge in China and are being implemented because of “the lack of adequate and transparent epidemiological and viral genomic sequence data being reported from” Beijing, the CDC said in a statement.

The Chinese embassy in the US did not immediately respond to a request for comment.

Orazio Schillaci, Italy’s health minister, on Wednesday said Rome’s new restrictions were “essential to ensure surveillance and detection of possible variants of the virus in order to protect the Italian population”.

Speaking after a cabinet meeting Wednesday night, Schillaci urged the EU to impose a bloc-wide testing requirement and said Italy had written to the European Commission to request one.

“Many Chinese passengers come to Italy from Schengen countries,” he said, referring to the bloc’s free travel area. “It is obvious and important to involve European countries in the initiative.”

Italy’s decision to require testing on all passengers arriving from China followed the detection of high rates of Covid infections among passengers on two post-Christmas flights that landed at Milan’s Malpensa airport from China.

Italy is desperate to avoid a repeat of March 2020, when it became the first European country to face a serious outbreak of the virus that went on to sweep across the world and kill millions of people.

Some Asian countries, including Japan and India, have also imposed new testing requirements for Chinese arrivals, in anticipation of a wave of visitors after president Xi Jinping’s government scrapped what was left of the zero-Covid regime that closed it off from the world for almost three years.

China is in the grip of an unprecedented wave of the virus, with tens of millions of people being infected daily. At the same time, the end of zero- Covid has prompted an increase in demand for international travel since Beijing said on Boxing Day it would lift many measures from January 8. Travel booking site Trip.com said Chinese outbound bookings were up more than 250 per cent on Tuesday compared with a day earlier.

There have been calls for other countries to impose restrictions. Juergen Hardt, foreign affairs spokesman for Germany’s opposition Christian Democrats, on Wednesday demanded a suspension of all flights from China to Germany.

The “exploding Covid numbers in China threaten the whole world with a new wave of infections”, he told media group RND. “Only when we’re sure that there’s no threat of a new, dangerous mutation out of China should we resume flight connections.”

Sebastian Gülde, spokesman for the German health ministry, said authorities were “keeping a very close eye on the situation in China”. “But so far we have no indication that a more dangerous mutation is emerging from this outbreak.” That meant there was no reason to declare China a virus variant area, which would entail travel restrictions on those arriving from the country.

The UK also said it was not considering restrictions for travellers arriving there from China.

Additional reporting by Giuliana Ricozzi in Rome, Guy Chazan in Berlin and Jasmine Cameron-Chileshe in London