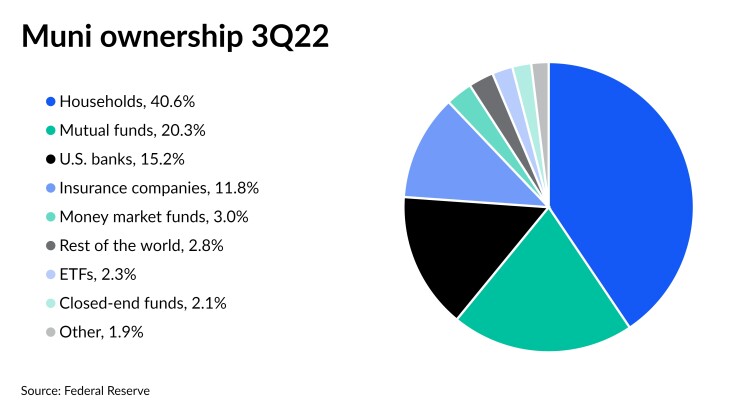 Fed data show the outstanding universe of munis shrinking in the third quarter in terms of both par basis and market value, said Matt Fabian, a partner at Municipal Market Analytics.

The value of the municipal bond market decreased by 4.3% in the third quarter of 2022, said Pat Luby, a strategist at CreditSights.

“That’s a larger all-in decline than occurred during the financial crisis, which pushed average prices lower by 13 cents over nine quarters,” he said.

The decline in outstanding munis over the course of the year speaks to the lack of issuance, said David Litvack, a tax-exempt strategist at the chief investment office at Bank of America, noting that bonds are maturing faster than new bonds are being issued.

“Some of that speaks to the fact that tax revenues were very strong over the last couple of years, and issuers received large amounts of stimulus aid from the federal government, which reduced their need to issue bonds,” he said.

Assuming munis retain their November/December gains through the end of the year, Fabian said, “these 3Q22 data should be the worst of it for our sector.”

The value of munis owned by households was $1.5 trillion in 3Q ’22, decreasing by $67.1 billion or 4.2% from the previous quarter, which Luby said is not materially different from the overall market.

The total market value for mutual funds dropped $48.6 billion to $774.5 billion in the quarter, of which $16 billion resulted from net outflows.

The total market value for muni exchange-traded funds decreased $2.8 billion to $87.1 billion, though the 3.1% decline was smaller than that of the overall market. Net inflows totaled $342 million.

“The real dramatic shift we’ve seen has been the outflows from municipal bond mutual funds,” Litvack said. This, he said, is partly offset by flows into exchange-traded funds.

“Mutual fund investors are taking advantage of losses in their funds to switch out of those vehicles into ETFs so they can maintain their exposure,” he said.

Litvack attributes retail investment’s move from mutual funds into ETFs as it being “a little adverse to following net asset values and mutual funds.

“When that happens over the course of the year, people have been getting out of their own funds in general,” he continued. “But at the same time, investors recognize that as yields rise, there is opportunity to get performance in the future, and so they’ve been able to maintain their exposure in ETFs.”

This, Litvack said, allows investors to tax-loss harvest while maintaining exposure to this sector.

Anecdotally, Luby added retail investors — who typically invest in munis either through mutual funds, SMAs, a discretionary platform or a traditional transactional account — have been moving out of mutual funds and into SMAs.

In the past, he said, individual investors bought bonds and put them into their accounts and let them mature. As bonds get called or mature, investors would put more money to work, meaning “there were a million or more different strategies at work in the market,” Luby said.

This causes a concentration “into a much smaller number of strategies.”

“Even though market values do fluctuate in SMAs, similar to mutual funds and ETFs, investors see on their statements what their cash flows will be over the life of the bonds, and they can control that,” Litvack said.

This happens as retail investors continue “to grab a bigger piece of the municipal bond market pie this year versus their institutional counterparts,” according to Tradeweb Chairman and CEO Lee Olesky and President and CEO-elect Billy Hult.

With municipal bond prices down around 9% through the first half of the year, they said, “institutional asset managers were standing face-to-face with a liquidity crunch” until retirees and their wealth managers took advantage of the rising yields accompanying the plummeting prices.

During the summer, Olesky and Hult said, “financial advisors accessing Tradeweb’s municipal bond platform on behalf of their retail clients were buying up munis at a rate of roughly 4-to-1 versus institutional investors, illustrating just how significant the trend toward retail fixed income has become across the broader municipal bond market.”

The trend was furthered by “an influx of new innovations and advanced data science methods,” with muni retail participants increasingly turning “to electronic trading innovations … to optimize their trading experience through enhanced price discovery and transparency,” they noted.

The industry, Fabian said, has been shifting away from the traditional transactional account where the investor works with their broker on a strategy, as opposed to the broker or manager making the choices for them in SMAs and discretionary platforms.

Luby said he took the sharp increase in broker-dealer holdings as a sign of the market’s health.

Primary dealer holdings increased by $1.5 billion in the quarter to $8.7 billion, or 59% of total broker-dealer inventories.

For broker-dealers to “have increased their market exposure suggests that they were seeing good enough demand from investors to justify carrying more inventory,” Luby said.

“The relationship between munis and Treasuries has made it a difficult year to hedge inventories, so it’s hard to justify taking on the market risk because the hedges have been so expensive this year and difficult,” he said. “The only rational cause I can see would be those dealers must have been seeing increased demand from their clients.”

That fits in with the increased demand in mutual funds, even though net flows were negative in the third quarter, Luby said. However, the gross demand for mutual funds has been high. This suggests income-oriented investors have been putting their money to work in munis, he noted.

“The volatility in the markets creates a lot of pain for bond and mutual fund investors watching NAVs go down,” Luby said. “But there are other investors who appear to be reacting to the volatility as an opportunity and have been putting money to work.”

Overall, “the data suggests that, while product scarcity is an abiding challenge for tax-exempt investors, market value declines imply that ‘scarcity’ as a market vector can be easily overstated,” Fabian said.

He notes, “what is scarce is not bond par but instead streams of tax-exempt income.” Before 2022, he said, “extremely low yields meant that the typical investor, who is on the hunt for a stated dollar amount of annual tax-free income, would need to purchase more par to achieve their goal.”

With prices lower and yields higher, even for very high-grade securities, “that same investor needs to buy fewer bonds to hit that income bogey,” Fabian said.